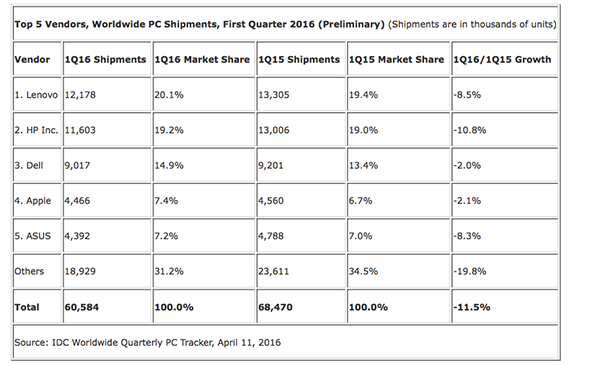 Despite declining sales of Mac systems, Apple has continued to gain market share in the global PC market.

According to the latest figures from IDC, Apple's share of the global PC market has now risen to 7.4% for the first quarter of 2016. This is up from 6.7% from the same quarter last year.

Lenovo continues to hold on to first place and has increased its lead over second-placed HP. It now enjoys a 20.1% share as compared to HP's 19.2%. A year ago, Lenovo and HP were almost on a par with 19.4% and 19% respectively.

Another interesting finding is that amongst the top 5 PC makers, Dell was the one that enjoyed the greatest gains in market share, climbing from 13.4% last year to 14.9% this year.