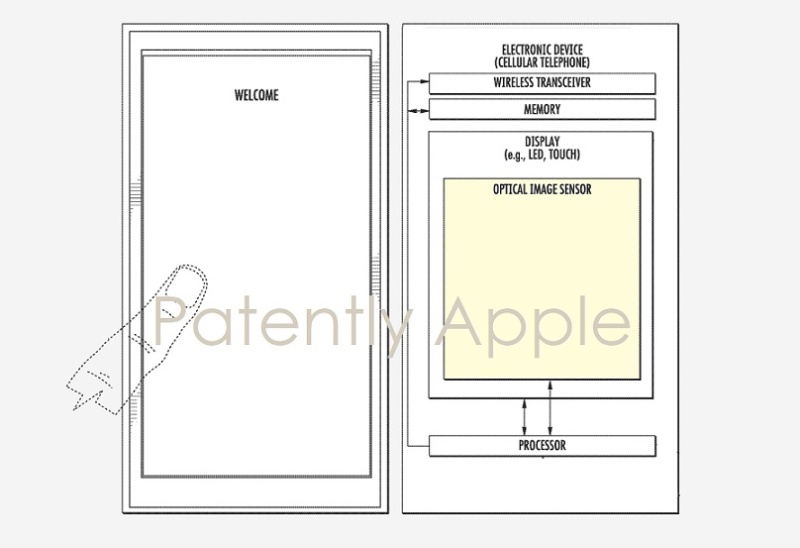 Apple is awarded yet another patent for an under-display Touch ID sensor.

The U.S Patent and Trademark Office published the newly granted patent which describes an under-display optical sensor that can recognise a fingerprint over much of the screen. This feature will not only help unlock a phone faster, but also make in-app purchase authentication a smoother experience as users do not need to reposition their finger to a specific area on the screen.

Apple has been rumoured to be working on an under-display fingerprint sensor for years. DigiTimes reported in 2015 that Apple was working on touch and display driver integration (TDDI) single-chip solutions for the iPhone. These TDDI single-chip solutions are said to integrate fingerprint sensors with the virtual home button, resulting in "ultra-thin and ultra-narrow displays" for future iPhones.

Credit Suisse claimed last year that screen suppliers are "actively developing full screens" without notches at the top for Apple, which led to speculation that Face ID would be replaced by under-display Touch ID in 2021. Analyst Ming-Chi Kuo wrote in his August 2019 investor note that he expects an iPhone with Face ID and in-screen Touch ID sensor to be released in 2021.

Bloomberg followed up with a similar report claiming that Apple is developing in-screen fingerprint technology that can read a fingerprint on a large area of the display. There are also rumours of a new iPad model using the under-display Touch ID sensor.

Join HWZ's Telegram channel here and catch all the latest tech news!
Our articles may contain affiliate links. If you buy through these links, we may earn a small commission.
Previous Story
Samsung and SK Hynix reportedly not selling chips to Huawei from 15 Sep
Next Story
Mass production of iPhone 12 to start later this month