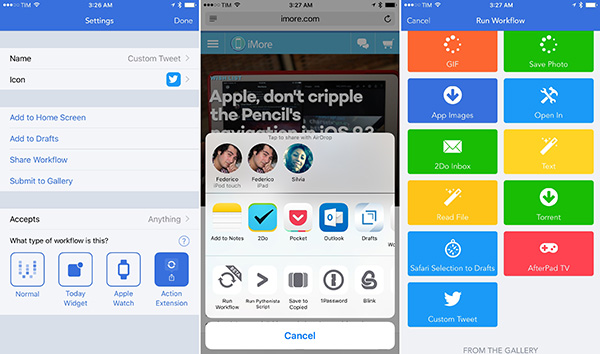 Apple has confirmed that it has acquired popular iOS automation app Workflow for an undisclosed sum.

First released in 2014, Workflow is an automation tool that lets users create a variety of workflows to do things like create GIFs from a series of photos, downloading images from a webpage, translating an article, posting photos to multiple social networks, and lots more.

The magic of Workflow is that it lets users access specific functions of individual apps and connect these functions into a n executable command all while being easy to use.

In fact, Workflow was so impressive that it won an Apple Design Award in 2015.

The small Workflow team will join Apple and the app itself will is available as a free download on the App Store now.

At this point, it is unclear what Apple will do with Workflow although it is likely the technology will be incorporated into iOS and macOS at some point. Some believe that it could be used with Siri, allowing Siri to do much more complicated tasks.

Previous Story
Local Arc Boards team is back with a bigger electric skateboard, the 121C Arc Aileron
Next Story
Samsung to offer an unconditional refund option for Galaxy S8 users?