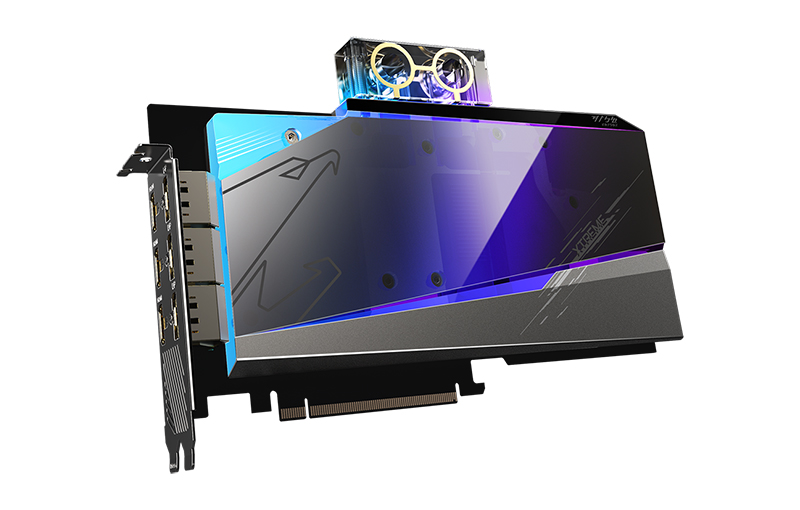 Gigabyte has revealed a new custom GeForce RTX 3080 card, designed specifically for custom liquid cooling loops. The Aorus GeForce RTX 3080 Xtreme WaterForce WB 10G is nothing if not eye-catching, featuring a vaguely futuristic design where individual components seem to blend into one another for a more seamless look.

The cooling solution provides dedicated cooling to critical heat-generating components, including the GPU, VRAM and MOSFETs. According to Gigabyte, it has also worked to implement optimal spacing between the micro fins to allow for improved heat transfer from the GPU via more stable water flow. The micro fins increase the contact area with the liquid flow as well, and the distance between the water channel and the GPU has been shortened for more efficient heat dissipation. A large copper base plate also covers the entire water channel over the GPU, VRAM and other components, allowing heat to be whisked away more effectively.

If you're worried about leakage, it comes with a built-in leak detection circuit covering the entire water block, which will alert you with a flashing warning light in the event of a leak.

On the rear end, the card is topped by a metal backplate, which further reinforces the PCB. There are a total of six display outputs, including three HDMI and three DisplayPort connectors. The card uses two 8-pin power connectors, and useful indicators above them will flash if there are any power supply issues.

Finally, this wouldn't be a gaming card without RGB lighting, and the water block itself supports Gigabyte's RGB Fusion 2.0 lighting, which can be synchronised with other compatible Aorus devices.

Join HWZ's Telegram channel here and catch all the latest tech news!
Our articles may contain affiliate links. If you buy through these links, we may earn a small commission.
Previous Story
Samsung's latest firmware appears to fix flickering on its G7 Odyssey monitor
Next Story
Apple announces "One more thing" event for 10 Nov