Here's what you can expect at Anime Festival Asia Singapore 2022

Here's what you can expect at Anime Festival Asia Singapore 2022 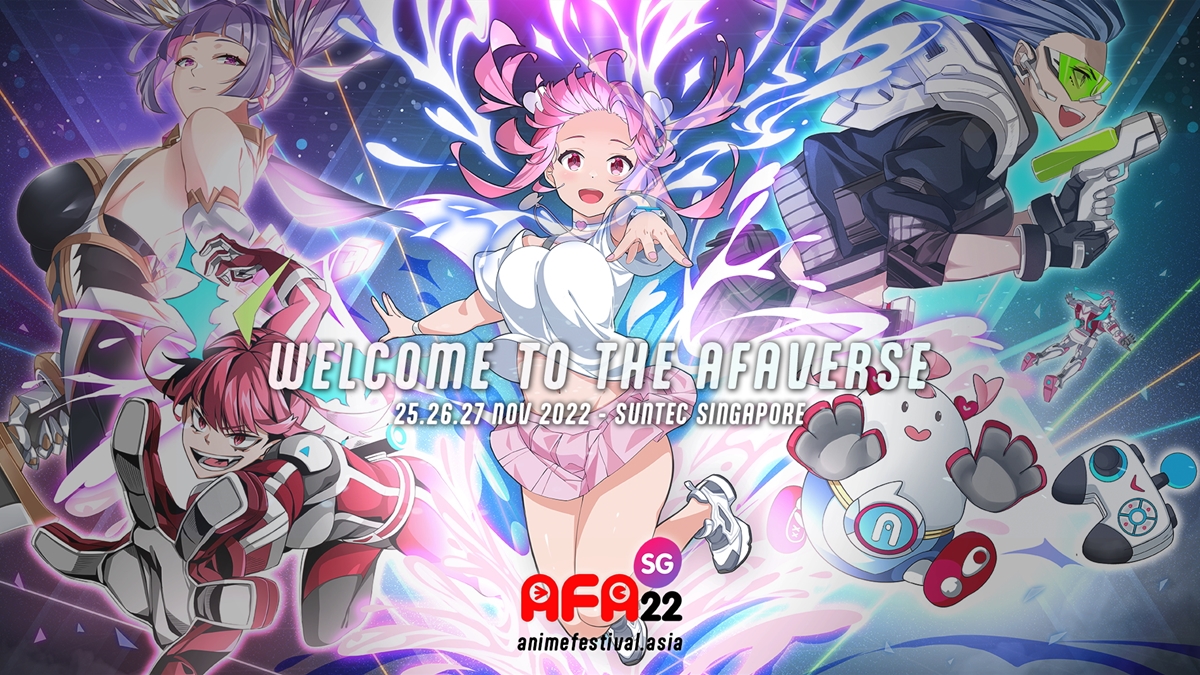 Back in September, Anime Festival Asia Singapore 2022 announced its return as a physical event after a two-year hiatus, but apart from a handful of details regarding VTuber (virtual YouTuber) performances, information about Day Stage highlights and other attractions was relatively scarce.

Fortunately, it seems the organisers have finally decided to grace us with an update this week, which is timely considering the convention arrives in a month's time. Specifically, AFASG2022 will unfold at the Suntec Singapore Convention and Exhibition Centre from 25-27 Nov, and tickets are already available for purchase, starting from S$21. Full details can be found on the official AFA Twitter if you need some help figuring out the different tiers. 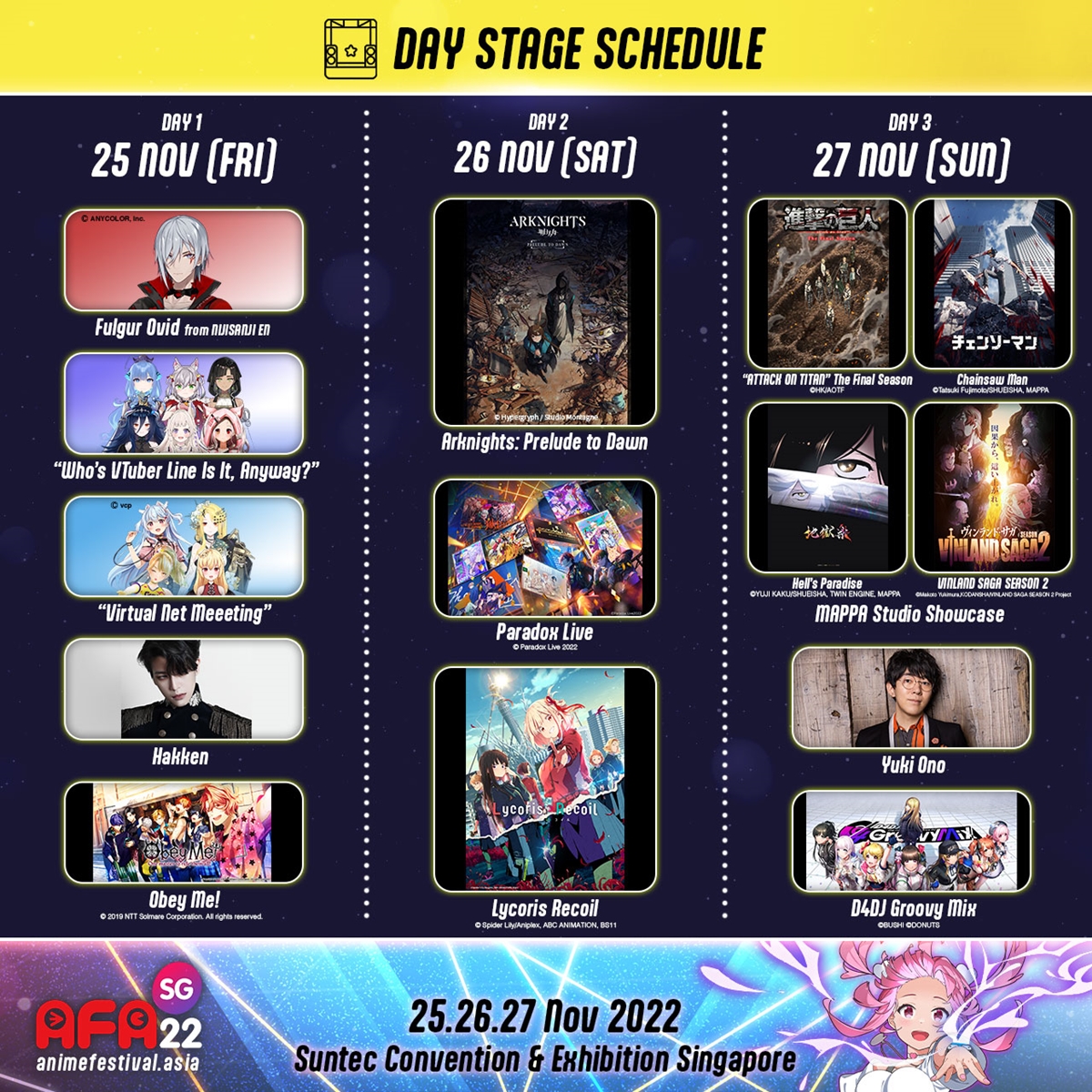 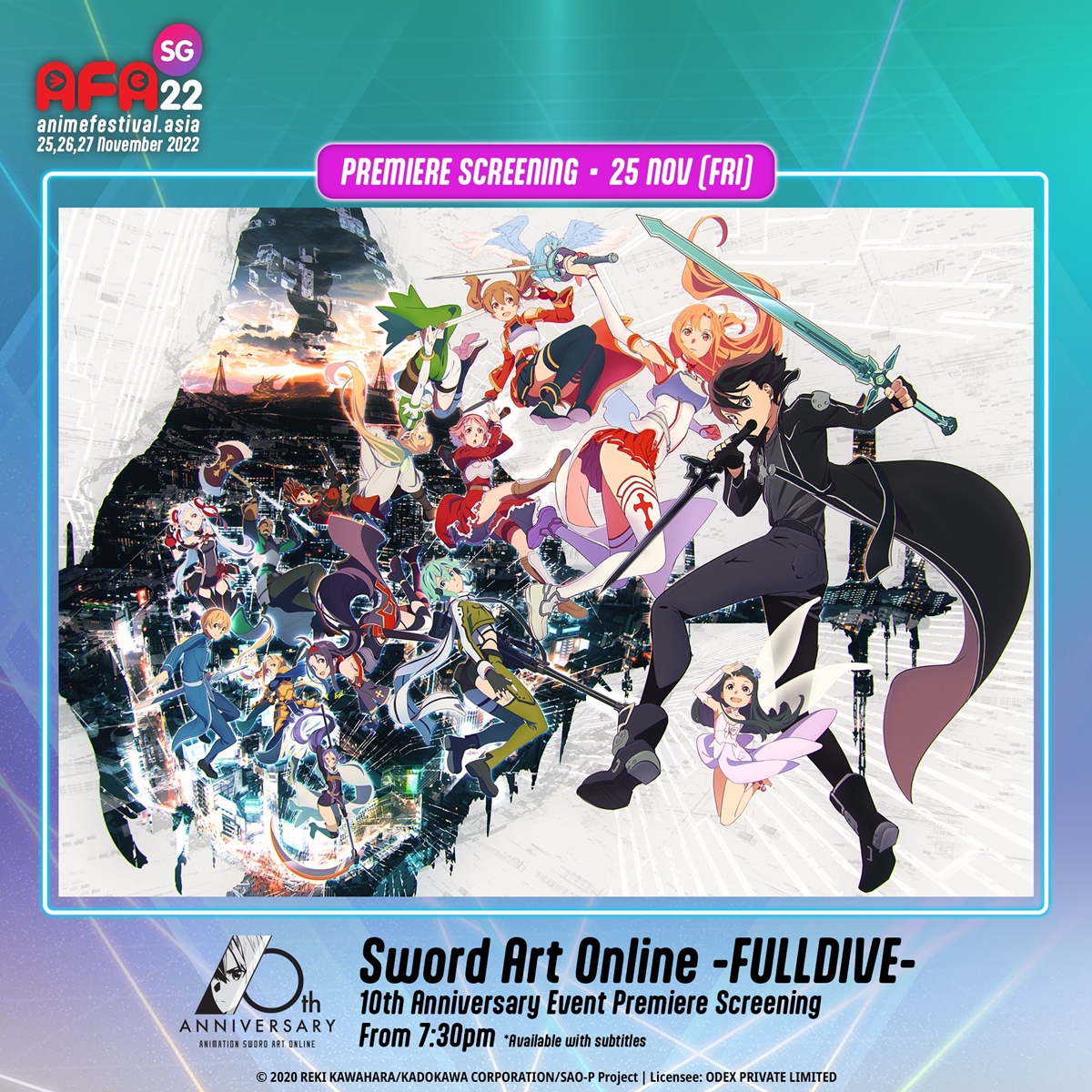 Aside from the Day Stage, the organisers also rolled out updates for other parts of the exhibition. Chief among them is the premiere screening of the long-waited Sword Art Online -FULLDIVE- movie at AFA Night Live!, which will take place on Friday, 25 Nov at 7 pm. This adds to the previous wave of announcements, which include meet and greet sessions with popular VTubers like Gawr Gura and Mori Calliope, as well as the usual I Love Anisong! concert. 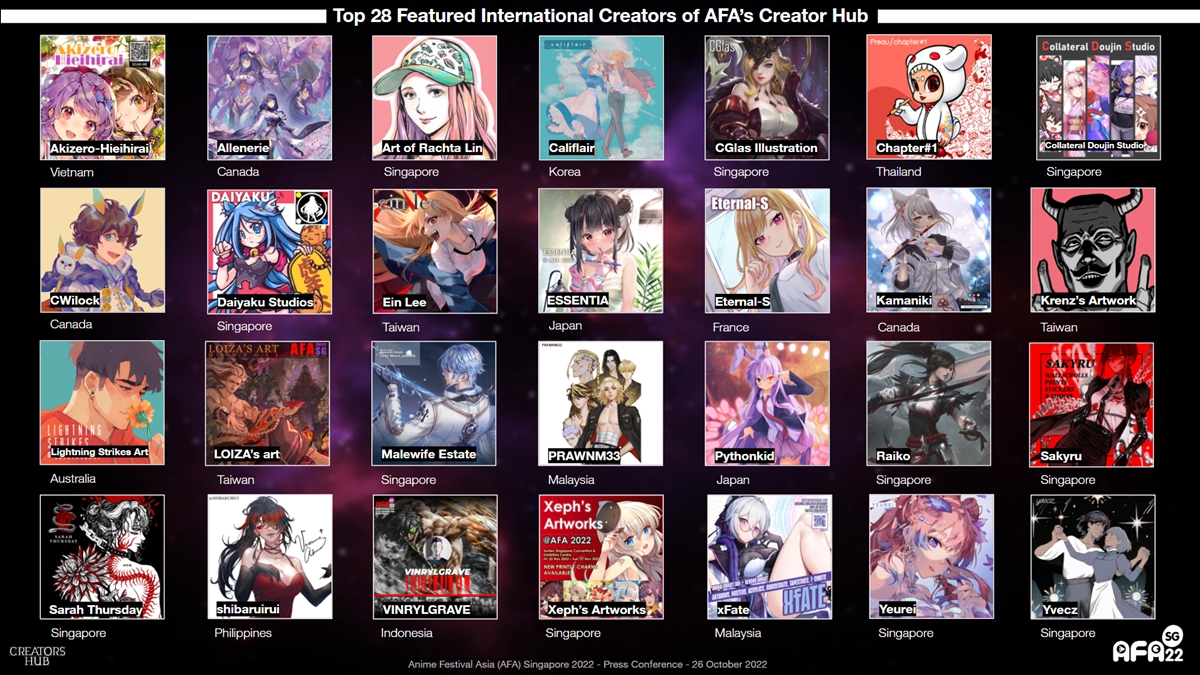 Apart from all the official exhibitor merchandise, performances and concerts, the Creators Hub is the exhibition's other main attraction. It's where local and international artists come to showcase and peddle their latest fan works, and this year, the organisers are partnering with Japan's largest online art community platform pixiv for the largest iteration ever. In addition, pixiv is also hosting an art competition where the winner stands to gain 200,000 JPY in cash (~S$2,000), a free Creators Hub booth at next year's convention, and a chance to showcase their latest works at the pixiv display area.

With the collaboration from pixiv, this year's AFA will feature over 150 participating creators from over 15 different regions around the world. However, 28 of these creators, which include Rachta Lin, Sara Thursday, and Sean "Raiko" Tay (one of my personal favourites, actually!), will be showcasing their work all over the festival grounds.

AFASG2022 will also play host to the latest J-Dance Asia competition, with the Finals unfolding on Saturday, 26 Nov at the Akiba Stage area. Groups of between 2-10 dancers will have the chance to dazzle the audience (and judges) with performances using popular Japanese songs, and the winner stands to walk away with up to S$1,000 in cash prizes. The judging panel, which is made up of renowned dancers from Singapore and Japan, will even have its own showcase segment. Registrations are open from now till 11 Nov via this form.

As for the cosplayers, they'll also have their chance to shine at the Cosplay Singles showcase competition. If you think your skills are up there with the best, why not take this chance to show them off on a regional stage and win up to $500 in cash? Registration closes just over a week from now on 6 Nov, so fill in this form if you'd like to try your hand at it. 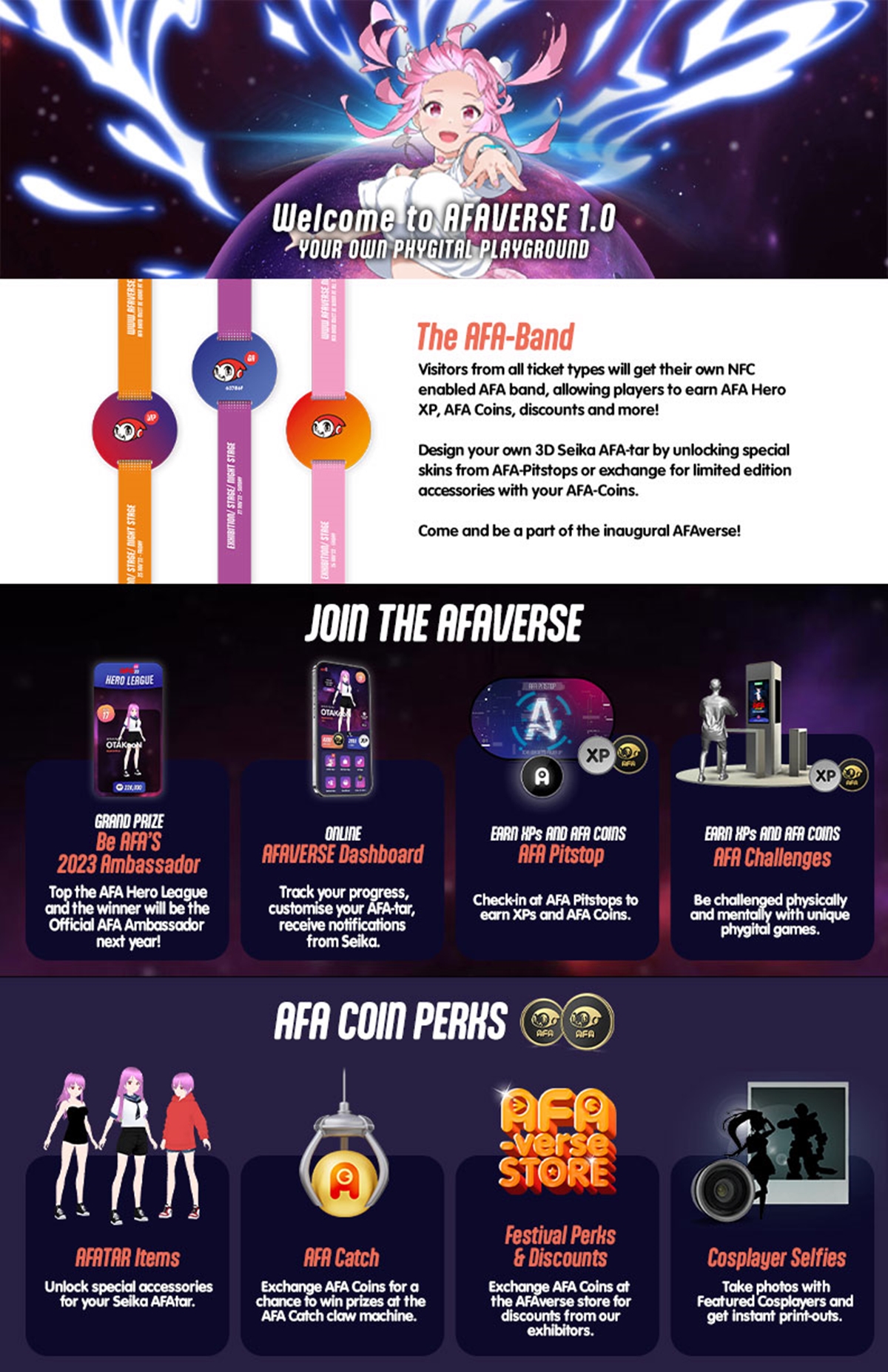 Last but not least, right from the moment visitors step into the convention, they'll be treated to a game-like experience where they can earn AFA Hero XP and Coins to exchange for exclusive items and discounts. This so-called AFAVERSE experience will be done through a specially-designed NFC Band that they'll receive on entry, and they'll even be able to design their own unique Seika AFA-tar too. In fact, the organisers have even tossed in some virtual easter eggs for visitors to discover, so make sure to keep an eye out for those as you make your way through the different exhibition zones.

For more information on AFASG2022, feel free to check out the official convention page or Twitter.

Join HWZ's Telegram channel here and catch all the latest tech news!
Our articles may contain affiliate links. If you buy through these links, we may earn a small commission.
Previous Story
The Apple iPhone 15 Pro may come with a "buttonless design"
Next Story
Elon Musk owns Twitter, fires its top executives immediately