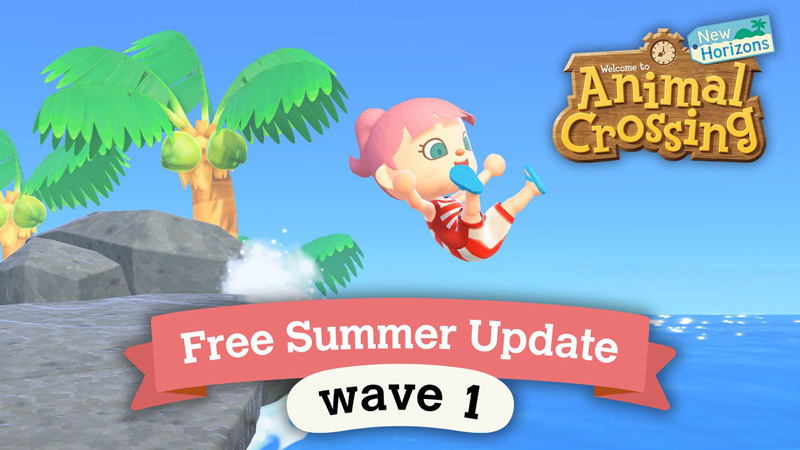 What lies beyond your island’s shores? Soon, you’ll be able to find out!

Nintendo has released a trailer for their upcoming series of Animal Crossing: New Horizons updates. Most of these updates are summer-themed, adding new gameplay mechanics to use, creatures to catch and NPCs to meet. The first update will arrive on July 3, for free.

Watch a trailer for the update:

Starting July 3, players will finally get to swim out into the ocean surrounding their island! They will also be able to dive underwater to catch all manner of new sea creatures (such as starfish), and donate them to Blathers’ museum if they so please. Occasionally, they might even run into Pascal the sea otter, who will trade sea creatures for new DIY recipes. These recipes appear to be mermaid-themed, judging by the trailer.

The often-shipwrecked Gulliver will also be part of a new random event. He will continue to appear washed up on your island’s beaches - but wih pirate clothes on this time. He’ll also give a mysterious ‘special reward’ to players who help him out. You’ll still have to go through the whole annoying process of talking to him 10 times just to wake him up - but at least we’re getting something new for doing so.

That’s not all, though. Nintendo also teased a second summer-themed update to come in early August. The game’s unique content for June will disappear soon - so be sure to grab whatever you need by next week!

Join HWZ's Telegram channel here and catch all the latest tech news!
Our articles may contain affiliate links. If you buy through these links, we may earn a small commission.
Previous Story
Microsoft to close all its retail stores and invest in digital storefronts
Next Story
A Cyberpunk 2077 anime for Netflix is being worked on by the studio behind Kill la Kill