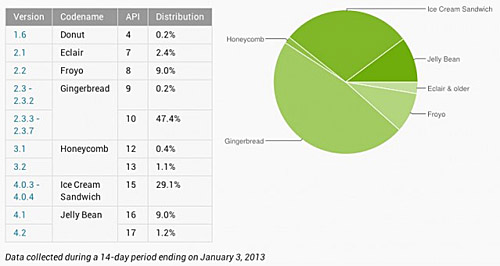 One of the major problems with Google's policy to let smartphone manufacturers handle hardware for their Android platform is fragmentation. Smartphone manufacturers are in control of  if and when users will be getting new operating system upgrades. Due to this a lot of the older versions of the Android OS are still is use at present.

According to the Developer Android site, Android version 2.3 which was named Gingerbread still remains the most commonly used Google OS with almost 50 percent of Android users still utilizing the platform. But over the holiday period at the end of 2012, a lot of the users upgraded to Ice Cream Sandwich and Jelly Bean. The complete breakdown as of 3rd January 2013 can be found in the visuals above.

The upgrades are good news for both users and developers. With more people moving on to newer versions of the Android, the users can benefit from all the advanced features of the later OS versions while developers will have a greater market and audience to tap.

Join HWZ's Telegram channel here and catch all the latest tech news!
Our articles may contain affiliate links. If you buy through these links, we may earn a small commission.
Previous Story
Corning to Showcase Gorilla Glass 3 at CES 2013
Next Story
LunaTik Premieres New Protective iPhone Cases at CES 2013