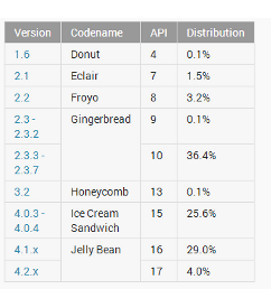 Android devices running Gingerbread still make up the majority at 36.5%, but Jelly Bean is catching up with 33% of the Android pie. Google has published this information as well as information on device screen size on its developer dashboard. Both versions of Jelly Bean (4.1 and 4.2) have a combined increase of 4.6% compared to last month, and have taken up a third of the market at 33%. The older versions Froyo, Eclair and Donut take up less than 5% when combined. Despite dropping 2%, Gingerbread still hangs on to the top position while Ice Cream Sandwich takes up 25.6%.

Google has released the information with hopes that it will help developers in prioritizing their efforts for supporting different devices. The figures are based on devices that have visited the Google Play Store in the last 14 days, so they should be quite accurate on reflecting the true state of Android distribution figures.