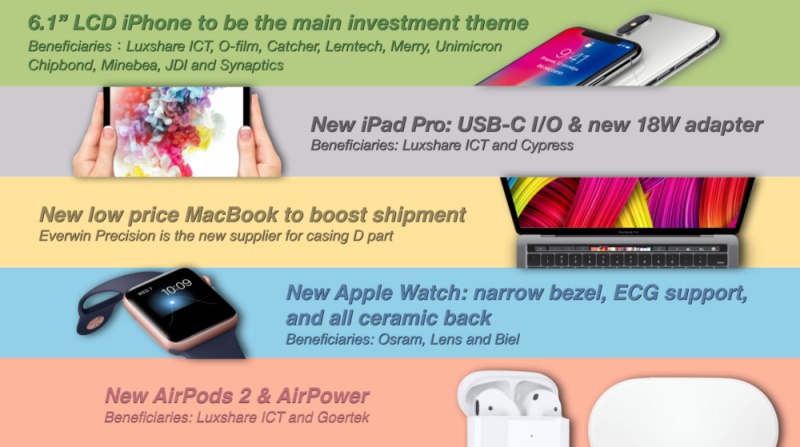 While the focus of the "Gather Round" media event will no doubt be on the three new iPhones, Apple actually has other new products to show off on that day or later in the year and analyst Ming-Chi Kuo has new information to share on that.

Kuo shared a new detail on the upcoming iPad Pros; the tablets will ship with the rumored 18W USB-C charger while the new iPhones will still use the slow 5W charger. This could also explain why purported retail box stickers of the iPhone Xs reveal the Lightning to USB cable and USB power adapter. He reiterated that the iPad Pros will come with Face ID.

The new, low-cost MacBook, is likely to replace the 12-inch MacBook in the lineup and feature Touch ID without Touch Bar. Bloomberg reported in August that the new MacBook will have the same design as the MacBook Air and sport thinner bezels around the higher-resolution Retina display.

As for the 6.1-inch iPhone model, Kuo said it will still launch in late September or early October due to quality issues of assembly and display.

Join HWZ's Telegram channel here and catch all the latest tech news!
Our articles may contain affiliate links. If you buy through these links, we may earn a small commission.
Previous Story
Apple is asking buyers why they bought the iMac Pro and what they like about it
Next Story
Purported retail stickers reveal box contents and name of upcoming iPhones