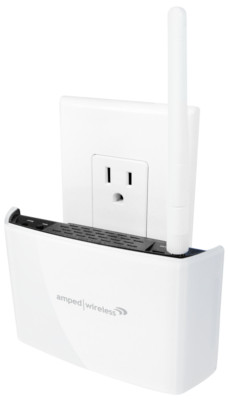 The new wall-plug unit extends the signal of any standard 802.11a/b/g/n or ac Wi-Fi router by repeating, amplifying, and redistributing the signal in a new extended location, such as a far bedroom, backyard, or office. Compared to standard Wi-Fi devices that have an output power of a mere 50mW, the REC15A packs up to 500mW of Wi-Fi output power, to further eliminate dead spots while achieving more range. With four total amplifiers and a high gain, dual band antenna, the device provides up to approx. 465 sq. meters of extended coverage.

Simultaneously repeating both 2.4GHz and 5.0GHz Wi-Fi signals, it can be discreetly installed in any outlet, and be set up wirelessly, using a tablet or laptop. Simply plug it into an outlet, access the web menu, and select a single or dual band network to extend. It’s compatible with all brands of standard Wi-Fi routers and Internet service provider gateways. An additional wired port is built into the REC15A for connecting PCs, TVs, Blu-ray players, game consoles and any other network device.

On top of incorporating security features including parental controls and adjustable Wi-Fi coverage settings, it comes with the Wi-Fi Analytics Tool App (free for Android and Windows devices), to help users analyze and optimize their networks. The app allows users to get the maximum speed and coverage from their device. All Amped products are also backed by Elite Technical Support provided by Amped Concierges.

Amped Wireless will be showcasing the REC15A along with other long range Wi-Fi products at Booth #36061, South Hall 4, at the Las Vegas Convention Center at CES 2014.