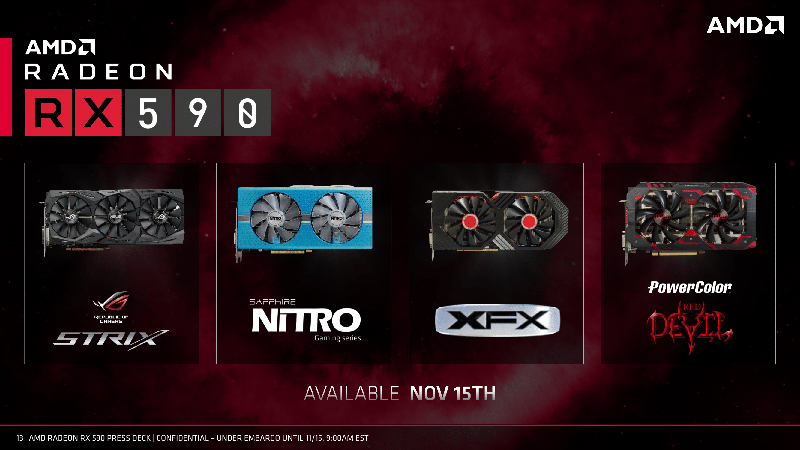 AMD has announced a new graphics card, but it's not Vega or Navi. The Radeon RX 590 is based on the company's fourth-generation Graphics Core Next architecture, also known as Polaris. However, unlike the Radeon RX 580 before it, it now uses GlobalFoundries' 12nm process, enabling higher clock speeds and a higher power envelope.

As it with the Radeon RX 580, AMD isn't shipping a reference design for the Radeon RX 590. Instead, it's launching with four custom cards from its board partners, including ASUS, PowerColor, Sapphire, and XFX.

To further strengthen its position as a value-for-money option, AMD is including a launch bundle of three games. Dubbed the Raise the Game Fully Loaded bundle, you'll get Resident Evil 2, Devil May Cry 5, and Tom Clancy's The Division 2 with every purchase of a Radeon RX 590 graphics card or a PC powered by it. The offer applies to AMD's Radeon RX Vega cards as well.

According to AMD, the Radeon RX 590 delivers up to 20 per cent better performance-per-dollar compared to the competition and is capable of running at up to 60FPS or higher in popular AAA games. The NVIDIA GeForce GTX 1060 6GB remains the direct competition for the Radeon RX 590, and the first reviews indicate that AMD's card is around 9 per cent faster.

In fact, AMD explicitly singled out the performance gap between the Radeon RX 580 and the Radeon RX Vega 56 and GeForce GTX 1070/1070 Ti as a space it was going after.