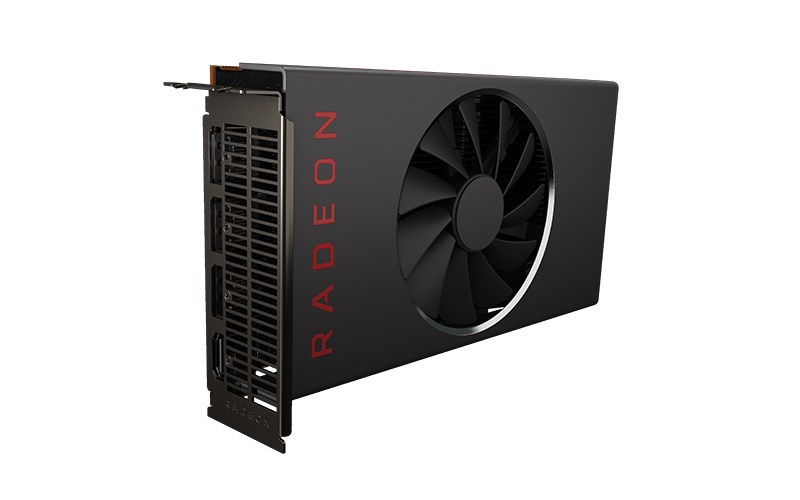 AMD today announced its Radeon RX 5500 series graphics cards, targeted at gamers looking for a card that can handle itself at 1080p. This latest addition to its Navi family uses the same RDNA architecture as the Radeon RX 5700 and 5700 XT, and AMD says you can expect over 90FPS in less demanding esports titles.

Compared to the NVIDIA GeForce GTX 1650, the Radeon RX 5500 is supposedly up to 37 per cent faster, pushing out 135FPS in Overwatch to the former's 89FPS. 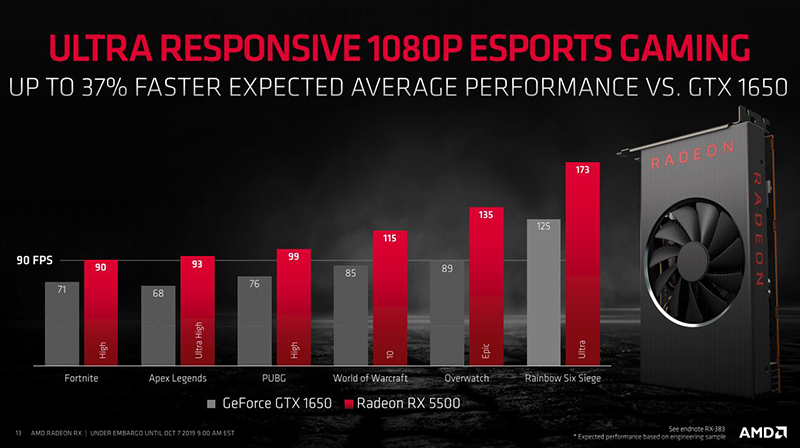 AMD is also introducing a mobile version of the card called the Radeon RX 5500M. The MSI Alpha 15 will be the first gaming laptop to sport the new GPU, while system providers like Acer, HP and Lenovo already have plans to offer the Radeon RX 5500 in select gaming desktop systems later this year.

Here's an overview of the cards' specifications:

You'll notice that AMD has listed the Game and Boost clocks but left out the base clocks. Both of these are essentially variants of a boost clock, and the Game clock refers to the typical boost frequency you can expect from your average game.

In addition, while the Radeon RX 5500M is listed as having a TDP of 85W, AMD says the exact specification is configurable and left in the hands of OEMs, so it might be higher or lower depending on the cooling capabilities of individual laptops. According to AMD, the Radeon RX 5500M is on average around 30 per cent faster than the mobile version of the NVIDIA GeForce GTX 1650. 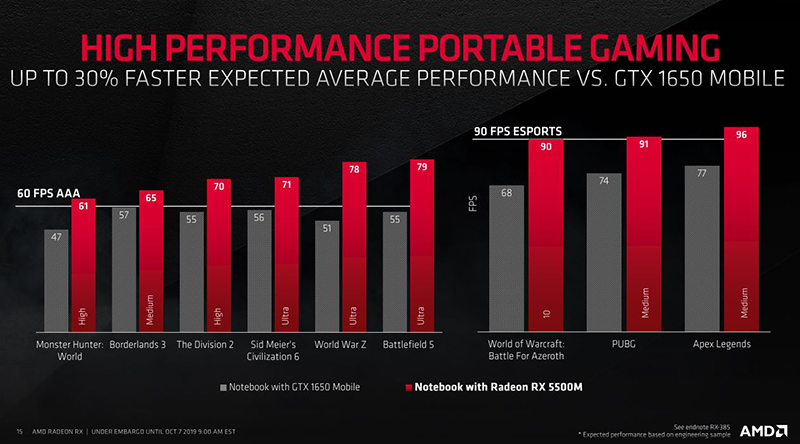 The Radeon RX 5500 and 5500M support the latest PCIe 4.0 standard, on top of various software features that were first introduced with the Radeon RX 5700 and 5700 XT. This includes Radeon Image Sharpening (RIS), which recently added support for AMD's Radeon VII and Vega GPUs, FidelityFX, and Radeon Anti-Lag.

There will be no reference model for the Radeon RX 5500, and AMD is going straight to launch with cards from partners like ASRock, ASUS, Gigabyte, MSI, PowerColor, Sapphire, and XFX in Q4 2019.

The new Radeon RX 5500 series is also eligible for AMD's new Raise the Game bundle, which will let gamers pick from either Borderlands 3 or Tom Clancy's Ghost Recon Breakpoint with the purchase of select pre-configured desktop or notebook systems.

The Radeon RX 5500 desktop graphics card is expected to be available with HP's Omen Obelisk and Pavilion Gaming desktops, as well as Lenovo's Legion T530 and IdeaCentre T540 Gaming PCs this November. The Acer Nitro 50 PCs will begin offering them later in December.

AMD has traditionally done quite well in the mid-range graphics market. Furthermore, given how well the Radeon RX 5700 and 5700 XT stack up NVIDIA's GeForce RTX 2060 Super and 2070 Super in terms of price and performance, the new Radeon RX 5500 series cards are poised to do the same in the middle of the market.

Join HWZ's Telegram channel here and catch all the latest tech news!
Our articles may contain affiliate links. If you buy through these links, we may earn a small commission.
Previous Story
Unreleased Apple Watch Sleep app mentioned in Alarms app screenshot
Next Story
The LG UltraGear Nano IPS gaming monitor's 1ms response time is a first for an IPS screen