Note: This article was first published on 9th October 2020 and is now updated with local prices. For more details of the new processors, read on for the high-level highlights below.

We've also reviewed the Ryzen 9 5950X and Ryzen 9 5900X processors in full detail, so check out our assessment over here.

AMD has announced its new lineup of Ryzen 5000 Series processors for desktops, which are also the first chips from the company to feature its next-gen Zen 3 architecture. Targeted at gamers and PC enthusiasts, the new chips also represent the biggest leap in performance for AMD's desktop processors yet. AMD's CEO Lisa Su even went so far as to state that "gaming begins with AMD". These processors will be available starting 5th November.

Lisa is also setting expectations high, promising that the top-of-the-line Ryzen 5950X will be the "world's best gaming CPU" when launched next month. This confidence stamps from the changes AMD made to the core designs in Zen 3 chips, which AMD says is an all-new design with a bigger jump than we got from Zen to Zen 2.

While the new Ryzens still use AMD's 7nm process, one major change is a shift in the way the CCX (AMD's terminology for CPU complex or core complex) modules work: 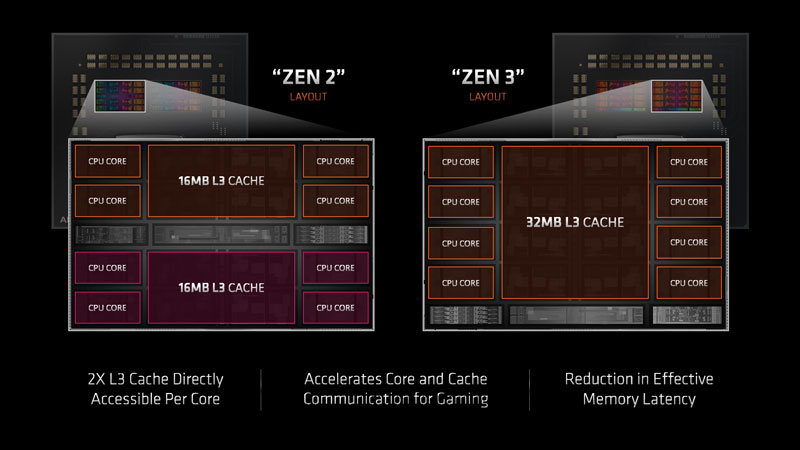 As you can see from the layout of the current and new chips above, the Zen 2 chips featured eight cores that were split into two four-core CCXs - each with 16MB of L3 cache. Zen 3 on the other hand, unifies the design so that each 8-core has a single CCX with unified access to all 32 MB of L3 cache. AMD says this reduces latency for both the cores and memory significantly, which helps gaming performance. Comparatively, AMD says there's a 19 per cent increase in instructions per cycle improvement for Zen 3 over Zen 2. 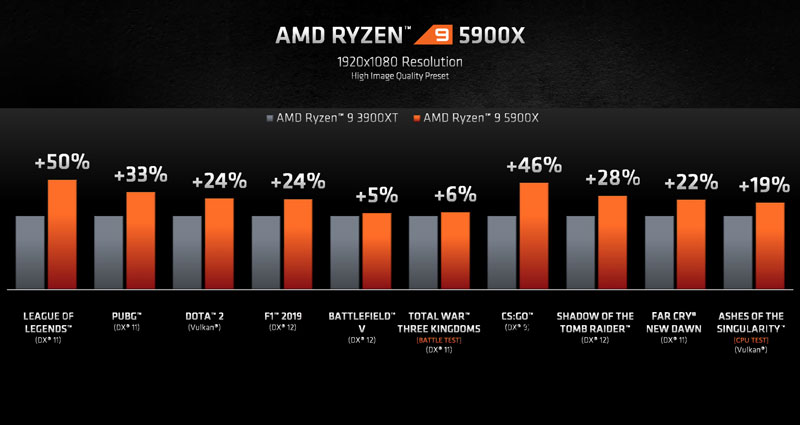 Altogether, AMD says that simply replacing a Zen 2 CPU with a comparable Zen 3 model will result in an average 26 per cent improvement for users, all while keeping TDP and core counts the same. The good news? The new processors will be compatible with existing motherboards after a firmware update. Most 500 series boards will have the update ready by launch, while 400 series can be expected to have new BIOS ready sometime from January 2021 onwards. The word on the grapevine is that there will be no 600 series motherboards launched for Zen 3.

Apart from the pack leader Ryzen 9 5950X, three other Zen 3 processors were revealed as well; the Ryzen 9 5900X, Ryzen 7 5800X, and the base model Ryzen 5 5600X. These new processors won't be cheap too. Each has gotten a US$50 price increase compared to the original prices of their comparable Zen 2 counterparts from 2019.

It's quite clear AMD is gunning for the high-performance category here as you would have noticed that there are no “non-X” processors at launch. These are traditionally the more affordable and lower clocked variants, but I'm hazarding a guess that these lower-cost Zen 3 processors will arrive sometime next year. 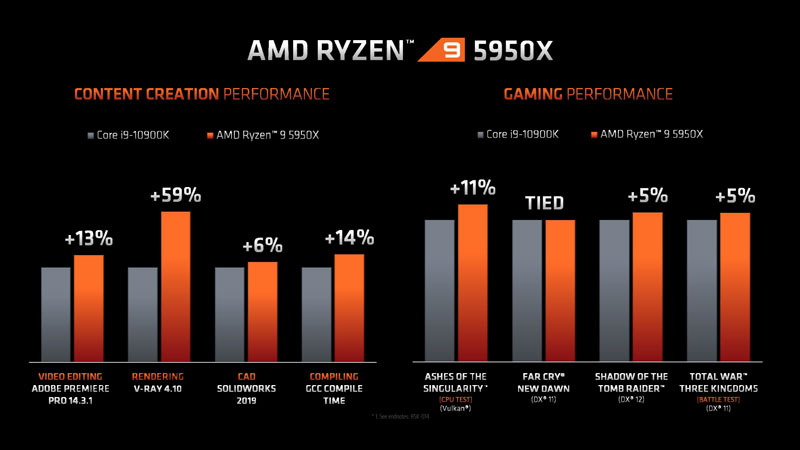 AMD also couldn't resist taking a pot shot at Intel, claiming in internal benchmarks that the Ryzen 9 5900X manages to beat Intel’s Core i9-10900K in head-to-head performance for a wide range of titles (see chart above). The jury is still out there, of course, as it's important to note that Intel’s top chip maxes out at a boosted 5.3GHz, while the Ryzen 5950X tops out at 4.9GHz (despite having the advantage in improved TDP and a higher core and thread count). We'll have to see how it fares in our own benchmark tests.

In any case, AMD won't have time to rest on its laurels, with Intel already getting ready to fire back with their own surprise announcement of its 11th Gen Rocket Lake desktop processors, which Intel claims to be designed for gamers and content creators as well. 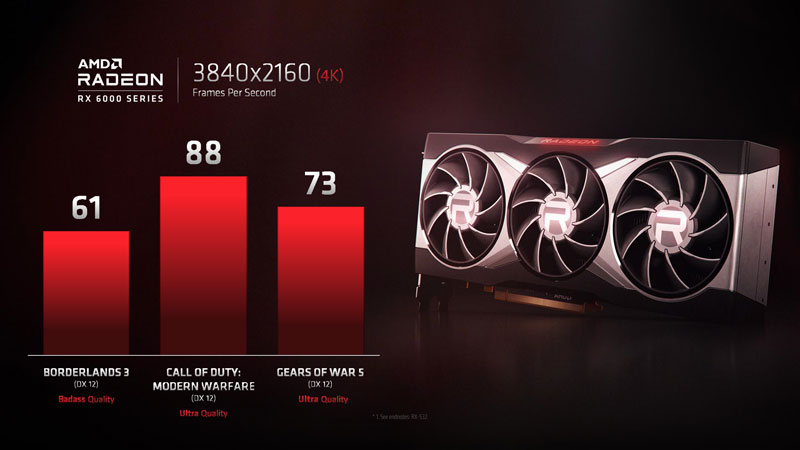 AMD also left a teaser for its highly anticipated Radeon RX 6000 Series of graphics cards. At the tail end of the Zen 3 Ryzen CPUs announcement, Lisa officially revealed the "Big Navi" - the company's answer to NVIDIA's RTX 30 Series along with a couple of benchmarks to show off the card's performance at 4K@60fps. AMD will have a separate announcement for these new cards on 28th October.

It's a great (and expensive) time to be a PC gamer.