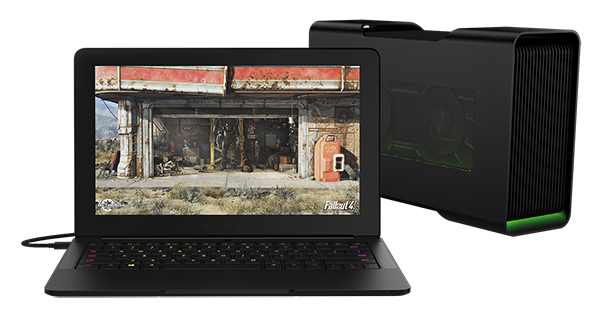 AMD has introduced XConnect, a technology that simplifies the process of using external graphics cards and docks by allowing users to add or remove an external GPU without needing to restart their PC. It will also let users switch between discrete and integrated graphics on-the-go, effectively enabling them to effortlessly toggle between work and play.

The external graphics dock in question must be connected via a Thunderbolt 3 connector, and you will require one of the following AMD cards:

AMD has excluded the entirety of its older and mid-range GPUs, and it appears to be making certain assumptions about the kind of performance that users looking to take advantage of external GPUs are expecting. At any rate, its relatively high performance barrier to entry means that it is already setting up a clear dichotomy between the two most obvious use cases – you can enjoy the mobility of an ultrabook, or shell out for a whole lot of extra gaming performance from a high-end GPU.

One other thing to note is the omission of the Radeon R9 Fury X from the official list of compatible cards, likely due to its 120mm radiator which would make fitting it into an external dock a bit tricky.

Support for XConnect is at the driver level, and is offered with Radeon Software Crimson Edition update 16.2.2 or newer.

The first device to use XConnect is the Razer Blade Stealth Ultrabook (and Razer Core dock) which debuted at CES 2016. While it was sporting an NVIDIA GPU at that time, it looks like the notebook will be offered with AMD GPUs as well.

Moving forward, AMD says that XConnect will work with other systems and external GPU devices, as long as they fulfill certain criteria. For instance, they must be running Windows 10 Build 10586 or later and have BIOS ACPI extensions for Thunderbolt external graphics cards.

Still, gamers expecting the full equivalent of desktop graphics performance should be aware that only four PCIe 3.0 lanes are available through the Thunderbolt 3 connection, compared with the usual 16 on a proper desktop.

But these limitations aside, AMD’s integration of support for external cards in its drivers is a step closer toward a reality when we can easily turn our notebooks into gaming powerhouses by simply hooking them up to an external dock. The only question now is when NVIDIA will join the party with baked-in support in its own drivers.

Join HWZ's Telegram channel here and catch all the latest tech news!
Our articles may contain affiliate links. If you buy through these links, we may earn a small commission.
Previous Story
Samsung sold 100,000 Galaxy S7 and S7 edge units in Korea in two days
Next Story
Goodyear really needs to invent this wheel