During yesterday's press conference at CES 2014, AMD was heavily focused on the new markets and possibilities they hope to reach out with their just launched high performance desktop Kaveri APU as well as the Kabini, Temash and Mullins APUs on the mobile front.

But somewhere between the presentation, AMD made a very quick update that they're also welcoming three new Radeon graphics parts that are destined for the mobile gaming market. We managed to catch this slide in a hurry:- 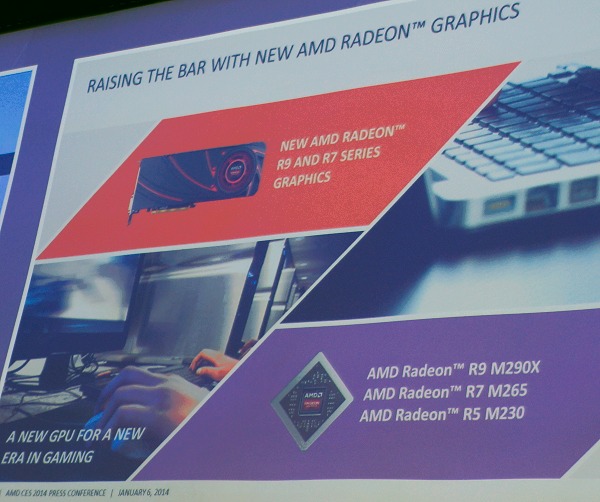 As the photo of the slide depicts, three new parts, the AMD Radeon R9 M290X, Radeon R7 M265 and the Radeon R5 M230 mobile GPU parts are listed. Given that their naming schema appears to be similar to the recently launched desktop graphics line-up, has AMD fast tracked their roll out plans? Unfortunately, it's a mixture of soft updates and re-branding at work - just like most of the desktop Radeon R9/R7 parts.

To be blunt about this, there's no next generation graphics core featured in any of the new mobile Radeon GPU parts. The Radeon R9 M290X has hardly any resemblance to the desktop Radeon R9 290X that sports the latest Hawaii GPU core. Tracking down AMD's product page for the R9 M290X, you'll find that the specs are quite similar to the Radeon HD 8970M, which is in-turn a re-brand of the Radeon HD 7970M. We're hardly amused by this finding and the specs comparisons perfectly add up that the Radeon R9 M290X is yet another rehash.

Like the desktop-line-up rebranding, AMD clearly wanted to accommodate the new feature support in the form of Mantle API (which is supported on all modern GCN based graphics engines anyway) and GCN hardware based architecture to form a new branding and shift away from the old naming scheme. Performance difference should be minimal and easily attributed to the slightly different clock and turbo core speeds from a more mature 28nm process with reduced power profiles. For those curious, the Radeon R9 M290X will closely match up with the desktop Radeon R9 270 - both of which share the same graphics engine from the Pitcairn XT core that first debuted with the Radeon HD 7800 series.

MSI and Dell are on of the earliest launch partners for AMD's 'new' Radeon R9 M290X GPU. Not surprising since it's just a drop-in update for the notebook partners who've had performance gaming notebooks that have featured the Radeon HD 7970M and the HD 8970M GPUs. 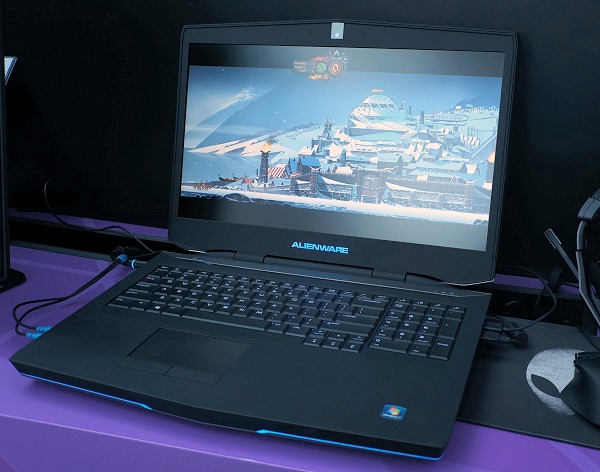 The story is pretty much the same for the lower range mobile graphics parts too. The Radeon R5 M230 has specs that put it on par with the desktop Radeon R7 240, which in-turn isn't a new graphics part. However, we're not too concerned about this for the entry level parts since performance seekers and enthusiasts aren't its target market and small advancements are pretty much the norm in this end of the scale. Furthermore, the corresponding part name doesn’t trick you to expect something more than what it's designed for, quite unlike the Radeon R9 M290X.

AMD needs to put more consideration into their marketing and naming schemes and not confuse its customers - especially the tech enthusiasts who are concerned with AMD's top and mid-range line-up.