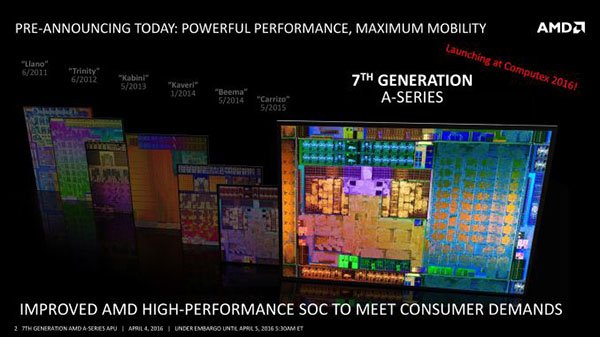 AMD has revealed that it is shipping its seventh-generation A-series processors, codenamed Bristol Ridge, to OEM customers ahead of schedule. Dual- and quad-core A-series processors are already shipping in volume to OEMs. The company dropped the news at a pre-announcement event, where it also announced that HP would be the first to feature the new APUs in its updated Envy x360 hybrid notebook.

AMD plans to make more details about Bristol Ridge available at Computex, and the exact specifications on the new APU are quite sparse at the moment. However, we do know that it will have a DDR4 memory controller – something non-R-series Carrizo chips didn’t have – along with minor microarchitecture manufacturing adjustments, more efficient transistors, and something called adaptive voltage frequency scaling that enables higher clock speeds.

In addition, AMD says that Bristol Ridge offers up to a 50% improvement in compute performance over Kaveri, which first launched in 2014. When it comes to the newer Carrizo APUs, Bristol Ridge is supposed to be 10% faster thanks to DDR4 support. 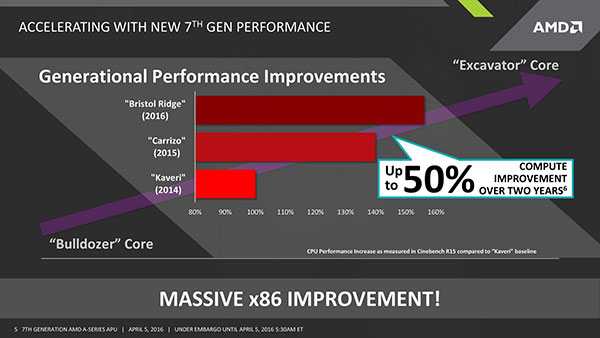 The company is also touting improved integrated graphics performance over previous generation APUs, and support for things like DirectX 12 and FreeSync.

The first notebook to feature a Bristol Ridge chip, the HP Envy x360, is actually on the large side for a 2-in-1 device. It has a 15.6-inch 1,920 x 1,080-pixel IPS display (configurable up to 4K) and will come equipped with an AMD FX-9800P quad-core processor (2.7GHz, 2MB L2 cache) with Radeon R7 graphics and a 15-watt TDP. However, HP isn’t forcing users to go with AMD, and the notebook can also be configured with sixth-generation Intel Core i5 or i7 processors.

Unfortunately, that’s most of the information we have on Bristol Ridge for now, and we’ll have to wait till Computex to find out more about things like a breakdown of the specific changes, part names, and clock speeds. Bristol Ridge is the last in the series of AMD APUs to feature its Bulldozer architecture, and the upcoming Summit Ridge APUs will be based on the long-awaited Zen architecture.