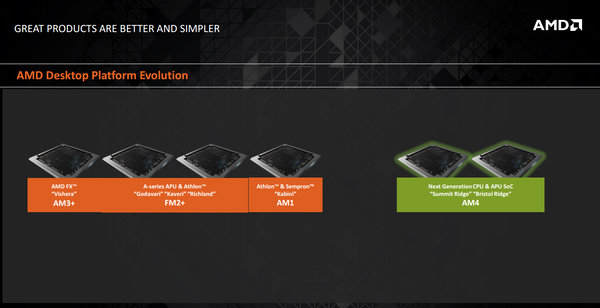 AMD revealed more details on its upcoming Zen architecture at CES 2016, including code names of the new CPUs and APUs and the socket that will be used.

As AMD would have it, the Zen architecture will share the same socket across both CPU and APU line-ups, where the new AM4 socket will replace the AM3+, FM2+ and AM1 sockets to become the only one needed for any Zen processor. This paves the way for all Zen chips to be supported on any AM4 motherboard, which would clear the path for users to upgrade entry-level builds to high-end performance hardware.

Existing AMD CPUs and APUs currently utilize a number of different sockets. For instance, the FX line of processors must be paired with the AM3+ socket, whereas APUs only work with the FM2+ socket. Each of these processor lines use different underlying architectures, which is why they require different sockets. But with upcoming CPUs and APUs featuring the Zen architecture, AMD was able to use the same socket for both.

In addition, AMD announced the code names for the Zen CPU and APU that will be released later this year. The Zen CPU has been dubbed Summit Ridge, while the APU goes by the name Bristol Ridge.

Both of these will support DDR4 memory, but AMD was otherwise sparse on the details, although it did say that we can expect more information in the coming months.

Join HWZ's Telegram channel here and catch all the latest tech news!
Our articles may contain affiliate links. If you buy through these links, we may earn a small commission.
Previous Story
First the Oculus Rift, now the HTC Vive VR headset gets a pre-order date
Next Story
Xiaomi unveils full metal body Redmi 3 with 4,100mAh battery