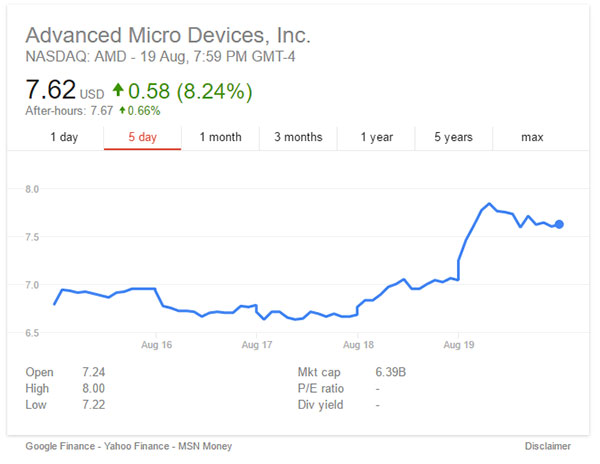 We don’t yet know if Zen will live up to AMD’s claims, but the company is already reaping benefits from its new processor. Since the unveiling of the Zen architecture last week, AMD’s stock has actually seen quite a decent boost. The chipmaker’s stock has been on an uptick since the earlier part of the year, but the climb accelerated after CEO Lisa Su announced more details about the upcoming CPU.

Zen’s unveiling and product demonstrations appears to have contributed to the overall bullish sentiment surrounding AMD has it promises to make a comeback. Overall, its stock is up an impressive 330 percent this year.

AMD’s stock began to climb in April – actually it’s biggest leap in 35 years – when it announced that it had inked a US$293 million deal with a Chinese venture to develop x86 server SoCs in the country. The company also returned to profitability in the second quarter of this year, which added on to its prospects.

Zen is supposed to be the centerpiece of AMD’s strategy to return to competitiveness in the PC chip market, so it’s understandable that it’s got everyone feeling fairly upbeat. It isn’t a stretch to think that Intel’s dominance of the market has allowed it to charge sky-high prices, like US$1,743 for the 10-core Core i7-6950X, with impunity.

The additional pressure from AMD will then hopefully force Intel to be more price-competitive, and if there’s one thing most people can agree on, it’s that more competition is better for consumers.

With that said, all that’s left is to wait for the actual Zen silicon and see if it delivers.

Join HWZ's Telegram channel here and catch all the latest tech news!
Our articles may contain affiliate links. If you buy through these links, we may earn a small commission.
Previous Story
Microsoft will fix failing Surface Pro 3 batteries with a software patch
Next Story
M1 and Nokia will roll out Narrow-Band IoT network by first half of 2017