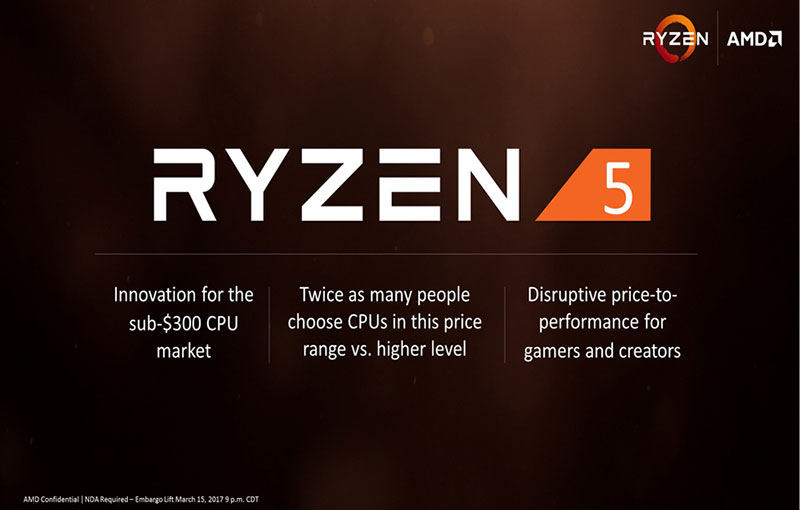 AMD today announced its full Ryzen 5 line-up, complete with pricing and availability details. Coming less than a month after the official unveiling of its Ryzen 7 processors, Ryzen 5 will take on Intel’s mainstream quad-core processors with stronger multi-threaded performance, similar to how Ryzen 7 challenges Intel’s Broadwell-E chips.

Ryzen 5 hones in on the sub-US$300 market, which AMD says is twice as large as the high-end segment. With up to 6-core/12-thread models in this price range, the company hopes to appeal to both content creators and gamers. At their heart however, they share the same silicon as their Ryzen 7 counterparts, and feature the same SenseMI technology like Pure Power, Precision Boost, and Extended Frequency Range (XFR).

AMD is releasing a total of four Ryzen 5 CPUs, which will hit the shelves worldwide on 11 April. Here’s an overview of the different SKUs and their local prices: 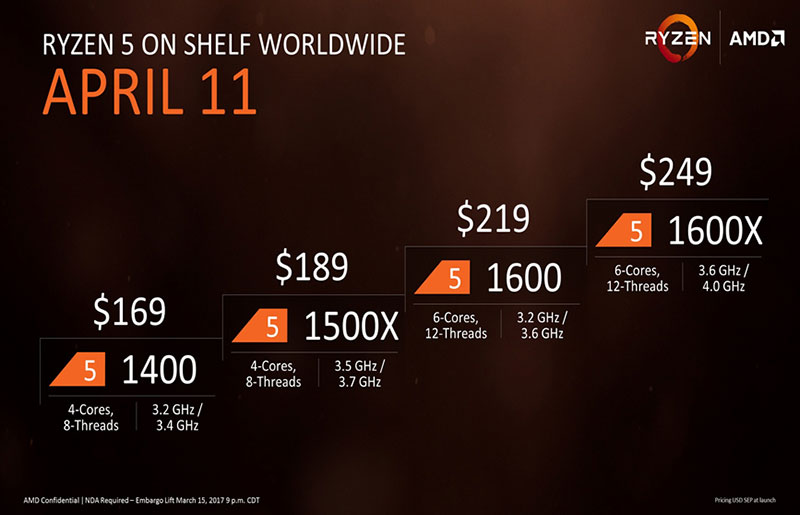 The Ryzen 5 1600X and 1600 processors will be 6-core/12-thread parts that AMD says will give users a significant core and thread advantage for their price bracket. On the other hand, the cheaper Ryzen 5 1500X and 1400 chips will be 4-core/8-thread parts.

In that context, it’s clear that AMD is looking to press its multi-threaded advantage and appeal to content creators on a budget who require strong multi-core performance.

All the Ryzen 5 CPUs will also ship with unlocked multipliers for overclocking, but you’ll need an X370, B350, or X300 chipset AM4 motherboard to take advantage of that.

But while the Ryzen 7 processors shipped mostly shipped without AMD’s Wraith coolers (with the exception of the Ryzen 7 1700), all Ryzen 5 chips save the Ryzen 5 1600X will come bundled with a cooler.

The entry-level Ryzen 5 1400 will come with the Wraith Stealth cooler, while the Ryzen 5 1600 and 1500X will have the beefier Wraith Spire cooler. AMD’s reasoning is the same as with its Ryzen 7 chips – those who buy the flagship Ryzen 5 1600X are more likely to want to use more capable third-party cooling solutions, so there’s no need to include a cooler.

After Ryzen 5, AMD’s next act will be Ryzen 3, which the company says we can expect in the second half of the year.

Join HWZ's Telegram channel here and catch all the latest tech news!
Our articles may contain affiliate links. If you buy through these links, we may earn a small commission.
Previous Story
NVIDIA’s beta Mac drivers for its 10-series cards are live now
Next Story
The Galaxy S8+ is more popular among U.S consumers; what's your preference?