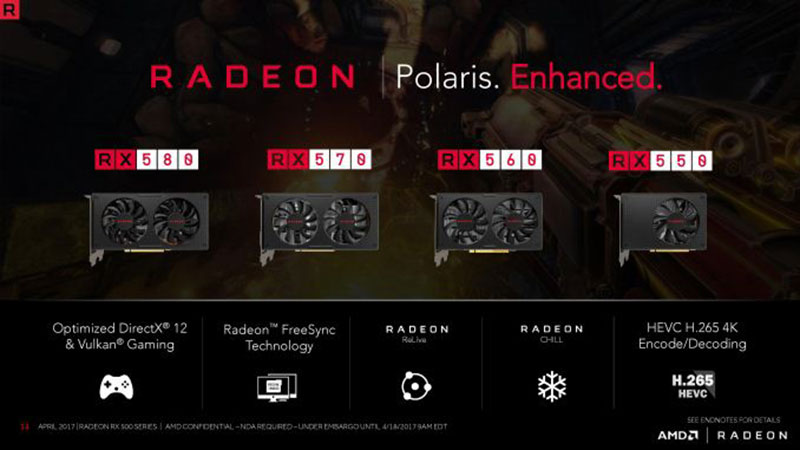 AMD has just taken the wraps off a brand new line of graphics cards, but no, they’re not the much anticipated Vega cards that everyone and their dog has been waiting for. The Radeon RX 500-series cards take over from last year’s Radeon RX 400-series cards in offering value-for-money options to consumers, and are based on a refreshed Polaris architecture that brings with it a couple of tweaks and improvements.

For starters, AMD has bumped up clock speeds over the previous generation, thanks to the third-generation 14nm FinFET process which the new GPUs are built on.

AMD specifically called attention to the improvements that GlobalFoundries and Samsung made to the 14nm LPP process, resulting in higher yields and better chip quality. 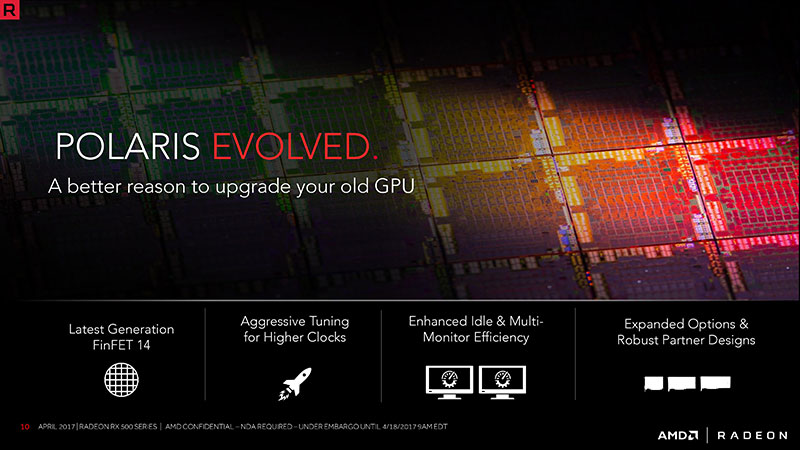 In addition, the company introduced new power saving features in the form of a new power state that allows the Radeon RX 500-series cards to consume less power while idle. This extends to very specific scenarios as well, and you can expect lower power consumption while watching video or using multi-monitor setups.

This is possible because AMD added a mid-power memory clock state that ensures that applications that require higher memory clocks, such as video decoding and multi-monitor operations, do not result in the memory clock ramping up to its highest and most power-hungry state.

On the topic of power-saving, AMD reiterated its work on the Radeon Chill feature first introduced with its Radeon Crimson ReLive driver. It is working to grow the number of whitelisted games for Chill, and the company announced that popular eSports titles League of Legend and Dota 2 are now supported.

That aside, the Radeon RX 500-series cards are not actually intended as an upgrade to the Radeon RX 400-series. Performance improvements over the latter are modest, in the ballpark of 5 per cent or so according to AnandTech, and the true target audience are owners of older Radeon 200/300 and NVIDIA GeForce GTX 700/900-series cards.

AMD went for the mass market with its Radeon RX 400-series cards, and it’s doing the same thing again this time around. If you didn’t pick up the first Polaris GPUs, AMD is hoping you’ll cave now.

Here’s a list of all the cards announced today:

Unlike with the Radeon RX 400-series however, AMD won't be releasing any reference cards and only custom designs from board partners will be available.

You’ll also notice that the Radeon RX 550 is a new entry that doesn’t have a direct counterpart in the Radeon RX 400-series cards, and it’s meant for users who want something a bit better than an integrated graphics solution.

For an overview of what each card offers, you can refer to the table below. The higher clocks over the older Polaris cards don't come for free, and the TDP has actually gone up slightly.

Join HWZ's Telegram channel here and catch all the latest tech news!
Our articles may contain affiliate links. If you buy through these links, we may earn a small commission.
Previous Story
Apple makes GarageBand, iMovie, Keynote, Pages, and Numbers free for all macOS and iOS users
Next Story
Big camera changes are said to be coming for the iPhone 8