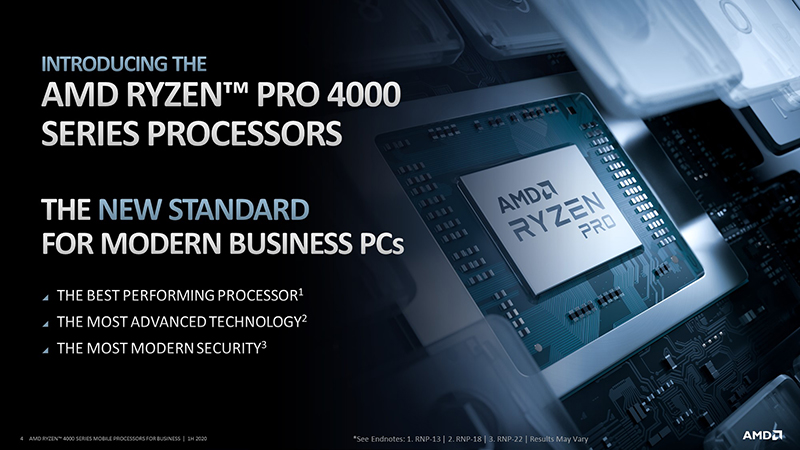 AMD has announced the global availability of its Ryzen Pro 4000 series of mobile business processors. These are the world's first 7nm commercial notebook processors, according to AMD, and were designed for remote work capabilities and modern productivity.

The new chips are based on the Zen 2 architecture and sport a bunch of new security features and improvements to battery life and performance, taking on Intel's vPro chips head on as they vie for inclusion in modern business PCs. In the case of the Ryzen 7 Pro 4750U, AMD says you can expect up to twice the performance per watt over the previous generation and over 20 hours of battery life on select platforms. On the performance front, the Ryzen 7 Pro 4750U is supposed to deliver up to 37 per cent better overall performance in Microsoft Office applications compared to its predecessors.

The Ryzen Pro 4000 series comprises three chips at the moment:

As business-ready processors, the Ryzen Pro 4000 CPUs are touting security features like the dedicated AMD Secure Processor, which leverages Microsoft's secured-core technology to prevent kernel-level attacks and other incursions. In addition, there's something called AMD Memory Guard encryption, which gives the Pro series chips support for full-memory encryption, the only chips to do so according to AMD. This means that data in your laptop's memory remains secure, even if someone else gets access to your laptop.

On top of that, enterprises can take advantage of the manageability features of the Ryzen Pro 4000 series, which enables simplified deployment, imaging and management that is compatible with modern IT infrastructures. This includes full support for Microsoft Endpoint Manager for a flexible and integrated cloud management solution.

Previous Story
AMD announces new Ryzen 3 chips, will support Zen 3 on X570 chipset
Next Story
Apple said to shift up to 20% of iPhone production from China to India