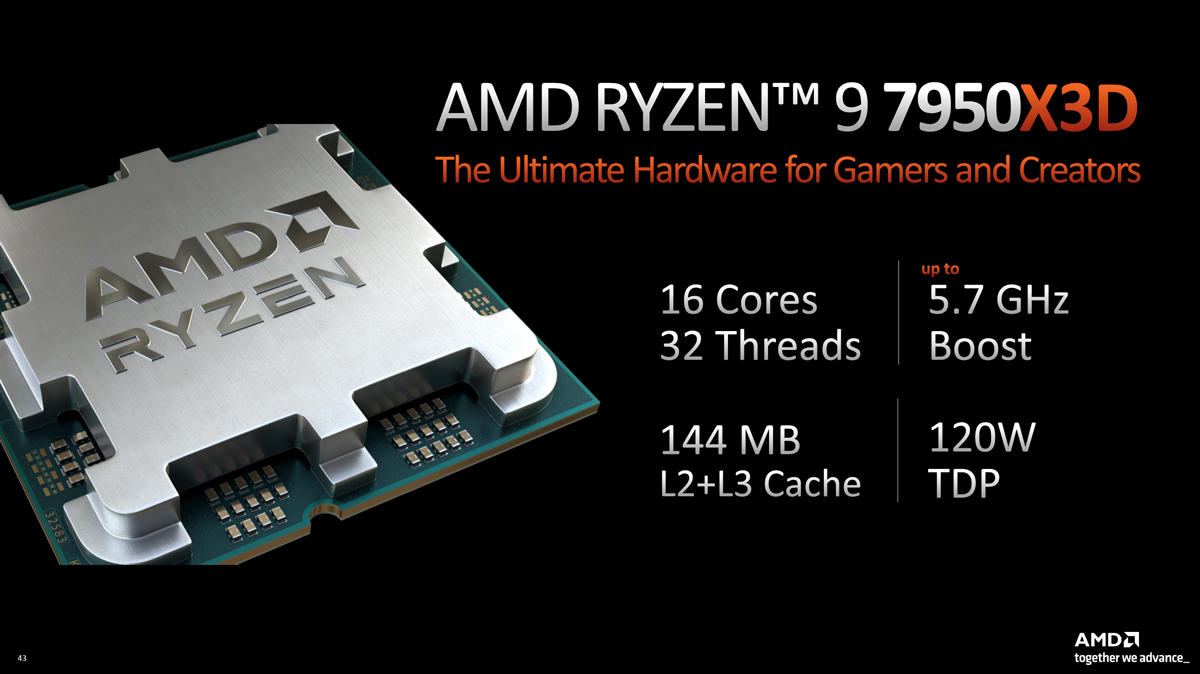 AMD is bringing its 3D V-Cache technology to its Ryzen 7000 desktop processors, including the Ryzen 9 7950X3D, 7900X3D, and Ryzen 7 7800X3D, which will be available from February. This technology has the potential to improve PC gaming and productivity, and could potentially allow AMD to regain the top spot in terms of PC performance, a position it lost to Intel's Core i9-13900K.

The red company’s decision to include 3D V-Cache technology in its top-end Ryzen 9 processors meant that it will be possible to assess the impact of this technology on productivity and rendering applications, as well as the expected improvements in PC gaming performance at the highest level of AMD's consumer CPU offerings.

The flagship Ryzen 9 7950X3D will have 16 cores, 32 threads, a 120-watt thermal design power (TDP), and an incredulous 144MB of combined L2 and L3 cache. AMD claims that this will be the "ultimate processor for gamers and creators," and that it will provide a 15-25% improvement in the performance of CPU-bound games at 1080p. Here is how AMD positions their top-tier against Intel's best enthusiast chip:- 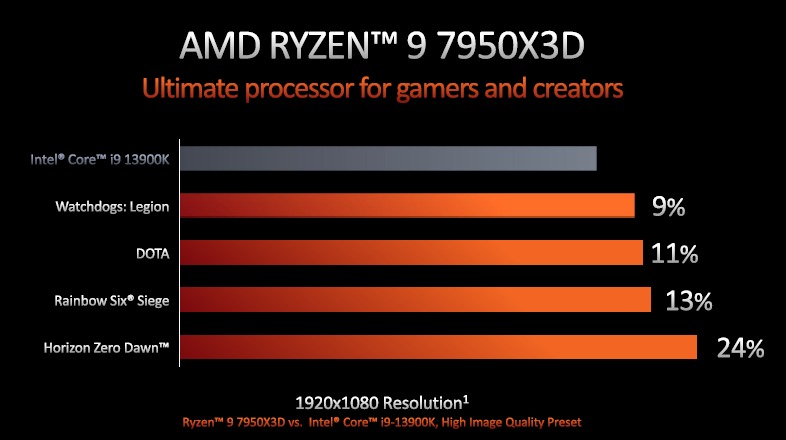 According to AMD, productivity improvements that can be expected from the Ryzen 9 chips with 3D V-Cache technology include up to 52% better performance in file compression using 7-Zip, a 17% improvement in Adobe Premiere Pro using the PugetBench Live Playback Score, and a 4% improvement in file encryption using VeraCrypt AES.

It is worth noting that these claims have not yet been fully tested, but based on the strong performance of the 5800X3D in gaming, it is likely that the 7950X3D will also deliver significant performance gains. The Ryzen 9 7950X3D, 7900X3D, and 7800X3D are set to be released in February, although pricing has not yet been announced. It will be interesting to see how AMD's pricing and performance compare to Intel's offerings, particularly given that the i9-13900K was priced about $100 cheaper than the 7950X. 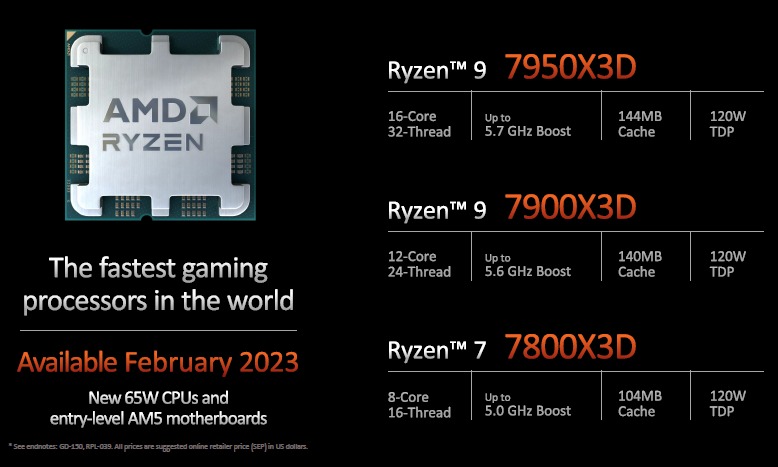 In addition to its top-of-the-line processors that consume more power, AMD is also introducing 65-watt Zen 4 CPUs as listed in the below image. The Ryzen 9 7900, designed to compete with Intel's 13th Gen non-K chips, will have 12 cores, a boost speed of up to 5.4GHz, on-chip Radeon graphics, and will be priced at US$429. It is intended to offer a balance of power efficiency and performance for both gaming and productivity. 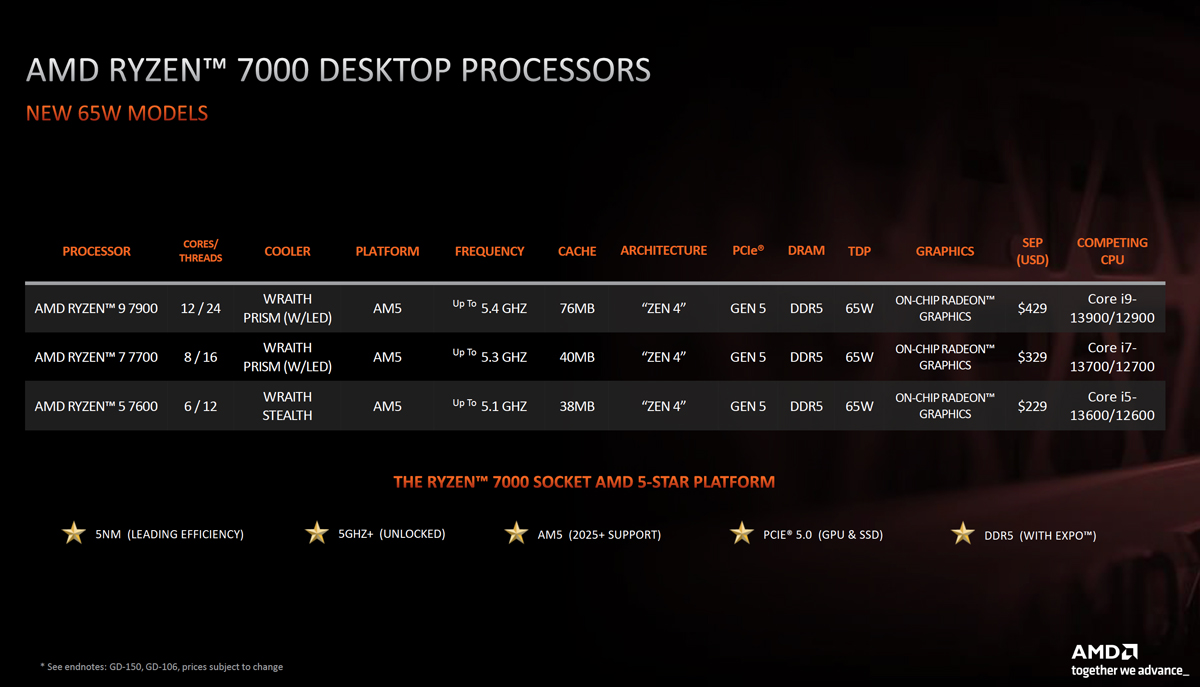 Join HWZ's Telegram channel here and catch all the latest tech news!
Our articles may contain affiliate links. If you buy through these links, we may earn a small commission.
Previous Story
Acer introduces new Nitro and Swift notebooks powered by AMD Ryzen 7000 processors
Next Story
Google puts up large ad at CES 2023 urging Apple once again to adopt the RCS messaging protocol