AMD reveals RDNA 2 to come this year with 50% improved perf-per-watt, teases RDNA 3 in the process

AMD reveals RDNA 2 to come this year with 50% improved perf-per-watt, teases RDNA 3 in the process 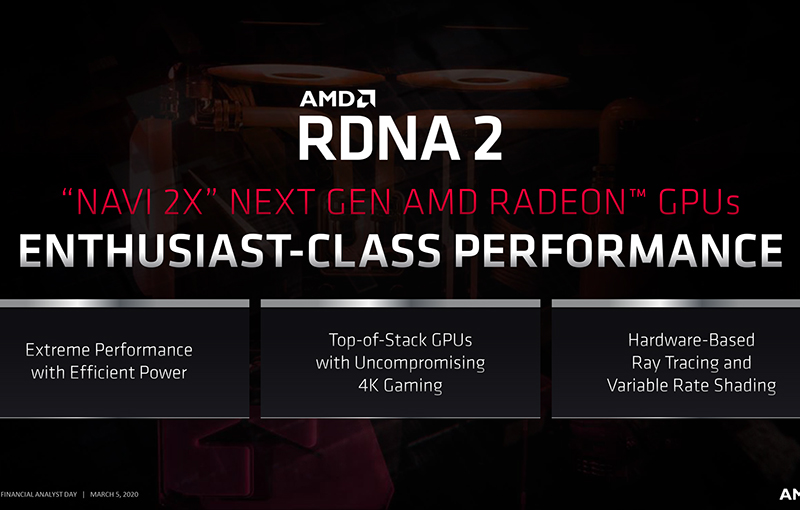 AMD revealed some interesting information about its new and upcoming RDNA 2 architecture at its AMD Financial Analyst Day.

First all of all, GPUs using this new architecture will be codenamed "Navi 2x".

Next, AMD reiterated that with RDNA 2, its eyes will be firmly set on the high-end, high-performance segment of the market.

With RDNA 1, AMD managed to put out some really strong contenders in the form of cards like the Radeon RX 5700 XT and Radeon 5600 XT.

However, AMD didn't have anything that could go toe to toe with NVIDIA's heaviest hitters like the GeForce RTX 2080 Ti and GeForce GTX 2080 Super. 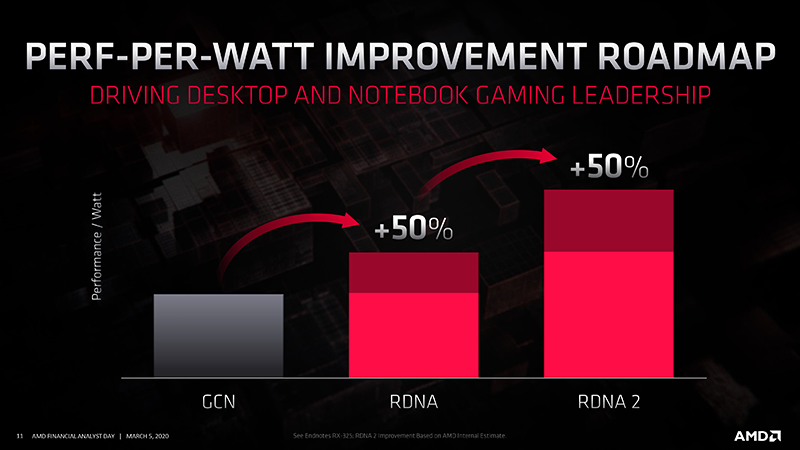 That will change with RDNA 2. And while AMD did not share specifics, it did say that they were aiming to deliver "uncompromising" 4K gaming.

It also said that RDNA will deliver significant performance-per-watt improvements. The company is aiming for 50% which is a huge amount given that that's what RDNA 1 delivered over GCN.

These improvements will come as a result of extensive optimisations and enhancements and not process node. AMD has confirmed RDNA 2 will still be built on a 7nm process but it will be enhanced version of the one used to build current RDNA GPUs.

No specific SKUs have been announced but we do know that RDNA 2 GPUs will feature in Microsoft's and Sony's next-generation gaming consoles which will be released later this year.

The company will move to a new process but that will only come with RDNA 3, which, if the graph above is to be believed, will come before the end of 2022. However, AMD did not disclose what node it will be using for RDNA 3 and only calls it an "Advanced Node."