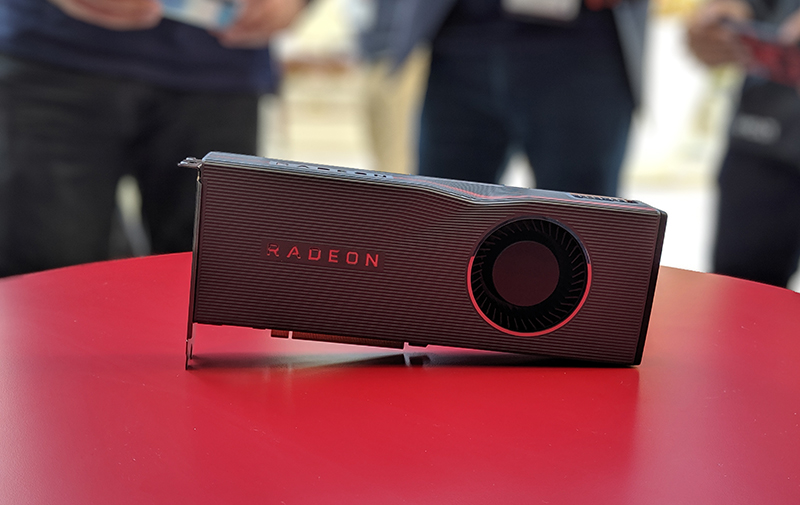 At long last, Navi has landed. AMD today announced the Radeon RX 5700 XT, a brand new card based on its revamped RDNA architecture. Truth be told, this could not come sooner, as we've been stuck with GCN since it launched in 2012.

However, while this isn't quite the card that will challenge the likes of the NVIDIA GeForce RTX 2080 Ti or even 2080, it still brings some exciting developments to the table, such as support for PCIe 4.0 and new media and display engines.

This is the first consumer GPU to utilize PCIe 4.0 and the 7nm process node, but AMD is also quick to point out other features such as GDDR6 memory and optimizations at the architecture level.

Aside from that, the company also revealed the Radeon RX 5700 for those on a tighter budget. The reference design for this card more closely resembles the Radeon VII though, and it's only the higher-end XT version that will get the swanky new look.

But first, here's an overview of their specifications:

One new specification you'll notice is Game clock. It's exactly what it sounds like, and is intended as an indicator of the typical boost frequency you can expect from your average game. AMD wanted gamers to be crystal clear about what they would be getting from these cards, so the Game clock helps set expectations for what frequencies you should be getting while gaming. That said, AMD says you should still see clock speeds in excess of the Game clock pretty frequently.

The company is also very proud of its reference design for the Radeon RX 5700 XT. At the very least, the design looks far more attractive than what the Radeon VII offered. For starters, there's a distinct futuristic vibe to it with its grooved shroud and quirky indentation at the side. Many of you are probably wondering why AMD is still sticking with a blower fan here, and the company said it still prefers this approach because of its ability to dump hot air outside of the case.

The fan also supposedly tops out at 43dB, and it had better, considering how insanely loud the Radeon VII was.

The card is powered by one 6-pin and one 8-pin power connector and features a 7-phase power delivery subsystem for overclocking.

The Radeon RX 5700 shares the same underlying vapor chamber cooling solution and graphite thermal interface material and it only differs on the exterior. 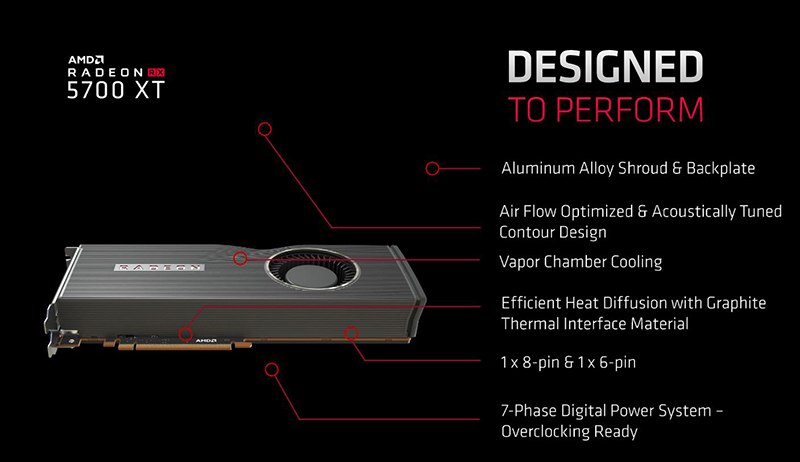 When it comes to performance, AMD's own numbers put the Radeon RX 5700 XT slightly ahead of the NVIDIA GeForce RTX 2070 in most of the tested titles at 1440p. I should also point out that these are not strictly head-to-head numbers because AMD actually took the best performing API for each title and card, be it DirectX 11, DirectX 12, or Vulkan, in order to make these comparisons.

The same goes for the Radeon RX 5700, which AMD put slightly ahead of the GeForce RTX 2060. The way things stand, it seems like AMD is still lacking a super high-end card to compete with NVIDIA, but the company says it's going to focus on RDNA for the long haul so we can reasonably expect a proper flagship model in the future. 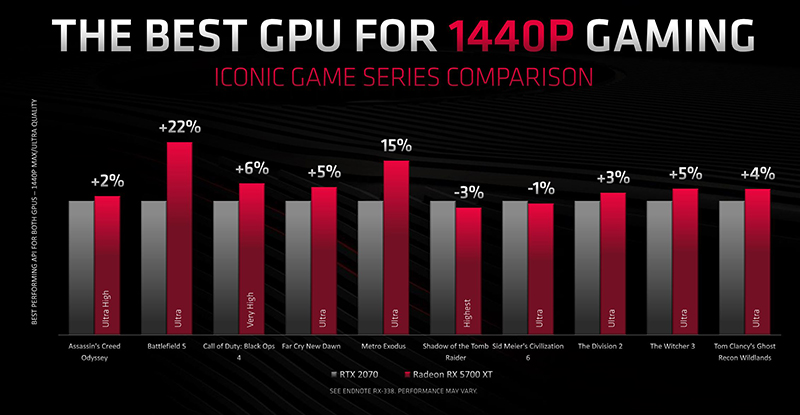 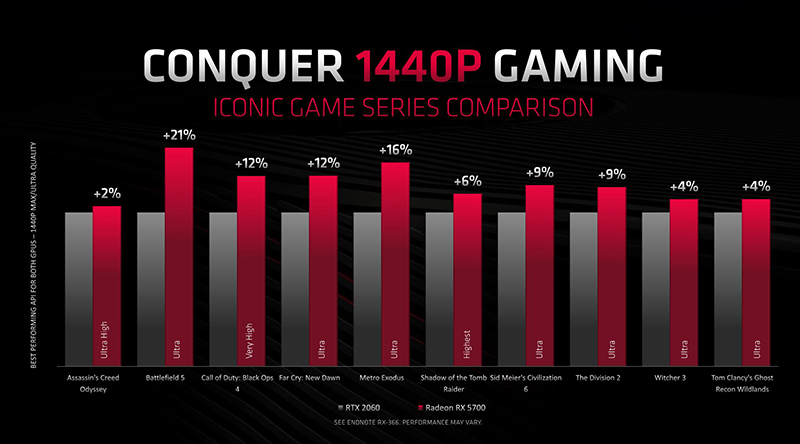 In addition, both cards feature three DisplayPort 1.4 HDR and one HDMI 2.0b output. They can support 4K 240Hz, 4K HDR 120Hz, or even 8K HDR 60Hz, thanks to something called Display Stream Compression (DSC) 1.2a on the new Radeon Display Engine. This is a standard defined by VESA, and it basically allows for lossless compression of visual content that can then be transmitted to ultra-high definition displays.

While there are already monitors that can display 4K HDR 120Hz content, they do so by using 4:2:2 chroma subsampling. This basically means that some color data is lost, and while this generally isn't that big a deal when watching video, it can become quite obvious when viewing colored text on solid backgrounds.

On the other hand, DSC employs 4:4:4 subsampling, which effectively translates into no chroma subsampling at all. This means richer and more vibrant colors, and the difference is actually fairly noticeable when two monitors are set beside each other, one with DSC and one without. In addition, DSC will let you run a monitor at 4K and 144Hz via a single DisplayPort 1.4 cable, whereas you'd have required two such cables previously. A monitor will need a new scaler to enable DSC, and AMD says it expects more OEMs to implement the feature moving forward.

On top of that, the Radeon Media Engine helps facilitate streaming with support for various encoding and decoding codecs. 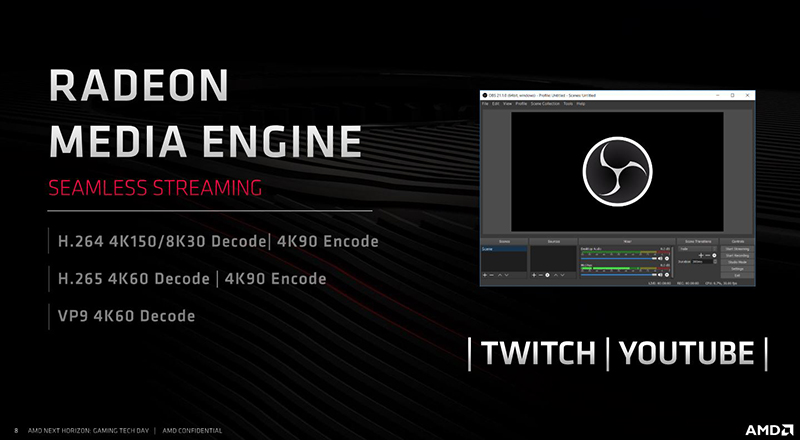 One thing you'll have noticed is the lack of support for hardware-accelerated ray tracing. Well, AMD's got an angle for that as well, and it says that it's focused on implementing features developers ask for, instead of shoving something new on them like NVIDIA did. That said, the company did say that it'll be enabling "select lighting effects" on its next-generation RDNA hardware, although that's still a sufficiently vague commitment that's hard to draw conclusions from.

However, the next-generation Xbox and PlayStation 5 are supposed to both offer hardware-accelerated ray tracing on their Navi-based GPUs in 2020, so AMD will probably hop onto the ray tracing train sooner rather than later.

Finally, AMD introduced something called FidelityFX, an open-source image toolkit that developers can use to improve visual quality. This is part of the company's focus on "game fidelity" and "game dynamics", which basically refer to how good a game looks and how it feels.

FidelityFX includes features like contrast adaptive sharpening, which improves detail in areas of low contrast. Then there's Radeon Image Sharpening, which has the effect of bringing textures into focus and making them look better.