Note: This article was first published on 22nd September 2020.

With the Covid-19 pandemic forcing businesses and employees to swiftly adopt remote working options as much as possible, the once humble class of Chromebooks too will need to transform to keep up with increased web-based demands by hosting video meetings, distance-learning and even more advanced content creation needs.

To that extent, AMD released a new line-up of Zen architecture-based processors designed expressly for Chromebooks, with partners like Google, ASUS, and HP introducing products in the near future that feature entry-level options to premium offerings.

Previous models of AMD-equipped Chromebooks, like the Lenovo S345, came with the last year's AMD A6 and A4 processors, which are entry-level options that were sufficient for light tasks like browsing the web and watching videos. These CPUs are still part of the Chromebook processor offerings, but the expanding usage needs for Chromebooks are now joined by AMD’s release of the Ryzen and Athlon based CPUs for Chromebooks should meet resource-intensive requirements like collaborative work, productivity, and even gaming. Meet the new additions:- 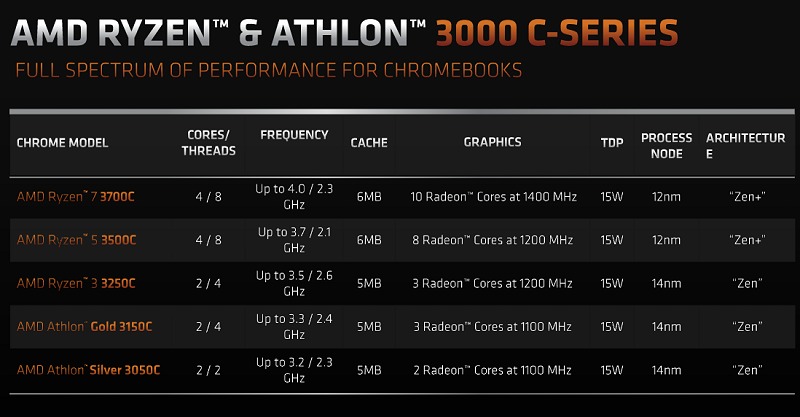 The new mid-tier Athlon and high-tier Ryzen Chromebook processors are the first to feature AMD's massively successful Zen CPU core architecture and feature much more powerful Radeon graphics to match entry-level discrete GPUs. In fact, these processors are pretty much the same Ryzen 3000U-series mobile CPUs launched for standard notebooks much earlier, but with a minor change in naming:-

In terms of performance, AMD benchmarked their Ryzen 7 3700C against the AMD A6-9220C found in 2019 Chromebooks, and claims to be “104% faster” for office type of productivity and up to “251% better graphics performance”. With a massive upgrade in CPU and GPU cores, we can easily see why AMD is claiming they now offer some of the most powerful Chromebook experiences possible. 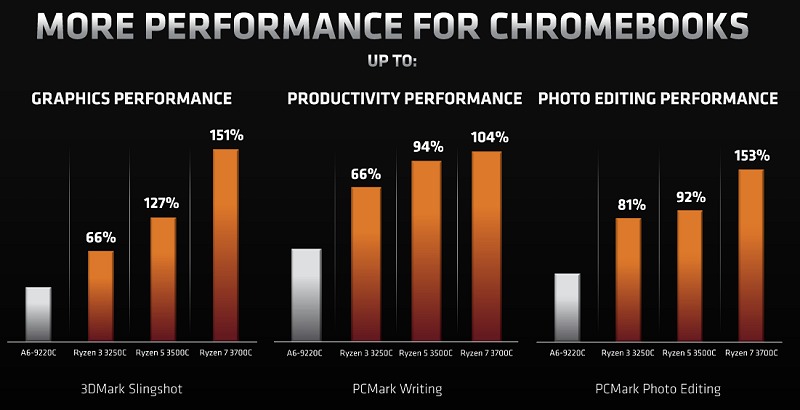 While there are no design wins that are in retail at the time of writing, the HP Pro c645 is the only Chromebook that has been announced that is said to be equipped with an AMD Ryzen-3000C series processor. This enterprise notebook has full Chrome OS manageability and security for IT deployment and boasts features like up to 16GB of memory, 128GB NVMe M.2 SSD, microSD card reader, USB-C, HP Fast Charge, and audio tuned by B&O. This is definitely one the more premium Chromebooks around, but it's yet to be made available.

Chromebooks continue to be a rapidly growing market where customers are looking for appealing designs and top-notch features to power their work, education and gaming with Chrome OS. Our partnership with AMD, along with the unprecedented offering of Ryzen processor-based Chromebooks, gives consumers and businesses an even broader choice of affordable Chromebook designs that deliver blazing fast connectivity, long battery life and the ability to power through multitasking workloads. - John Solomon, Vice President of Chrome OS at Google.

We'll update this space when we come to know of more premium AMD Chromebooks and availability of HP's Pro c645.