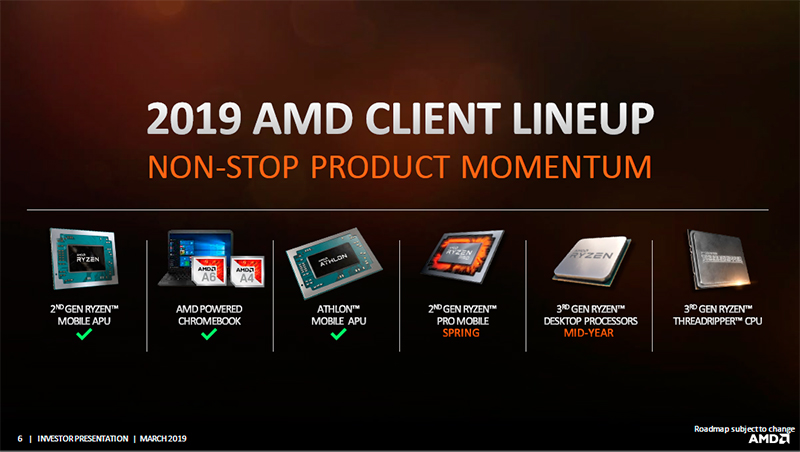 AMD is forging ahead with its plans for its CPU line-up. According to a presentation slide from an investor briefing, AMD will release its second-generation Ryzen Pro mobile processors this spring, followed by its third-generation Ryzen and Threadripper processors.

The slide pegs the new Ryzen desktop chips for the middle of the year, with the new Threadripper chips coming sometime after. We already knew that the Ryzen 3000-series was due for a release in 2019, but it seems like we could see new Threadripper chips this year as well. The second-generation Threadripper processors were released in August last year, so it seems reasonable to expect AMD to stick to roughly the same time frame.

Earlier this week, local retailer Bizgram also leaked what looked to be the model names and prices for the Ryzen 3000-series.

While we know that the new Ryzen processors will use 7nm Zen 2 cores and a more flexible chiplet design, there haven't been much details about the upcoming Threadripper chips. That said, AMD's next-generation EPYC processor, codenamed Rome, already features up to 64 Zen 2 cores, so it seems like we could see similar core count increases for Threadripper as well.

Of course, nothing is set in stone yet, and we'll have to wait for an official announcement from AMD before we know more.