Last month, AMD announced its AMD Radeon HD 7970 GHz Edition 3GB DDR5 graphics card. As a follow-up, AMD has reduced prices of its Radeon HD 7000 series GPUs. Its actions are also seen as part of the preparation of the rumored launched of its dual-GPU Radeon HD 7990 that will challenge the NVIDIA GeForce 690 GPU. 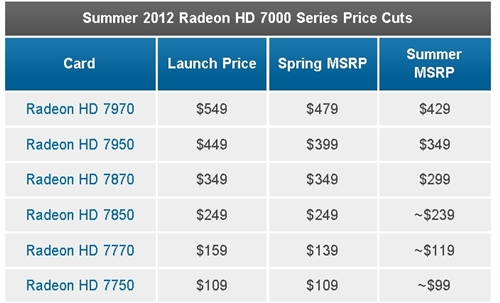 As noted by AnandTech, AMD has little control over the final retail prices of graphics cards based on the AMD Radeon HD 7000 series GPUs, which are offered by the graphics cards manufacturers. Some of the cards that are currently available on the market have already reduced prices prior to this official price reduction exercise by AMD.

Graphics cards based on the AMD Radeon HD 7970 GHz are still missing from retail shelves; however, AMD expects XFX and Sapphire to launch these cards soon. Later this month, AMD may launch the AMD Radeon HD 7990. The card will feature 6GB of GDDR5 video memory. It will sport a pair of 28nm "Tahiti XT" GPUs, with 2048 stream processors. The reference card is priced at US$849.

Join HWZ's Telegram channel here and catch all the latest tech news!
Our articles may contain affiliate links. If you buy through these links, we may earn a small commission.
Previous Story
WD Designs First Hard Drives for SOHO NAS Systems (Updated)
Next Story
Ex-Google Executive Marissa Mayer Named as the New CEO of Yahoo