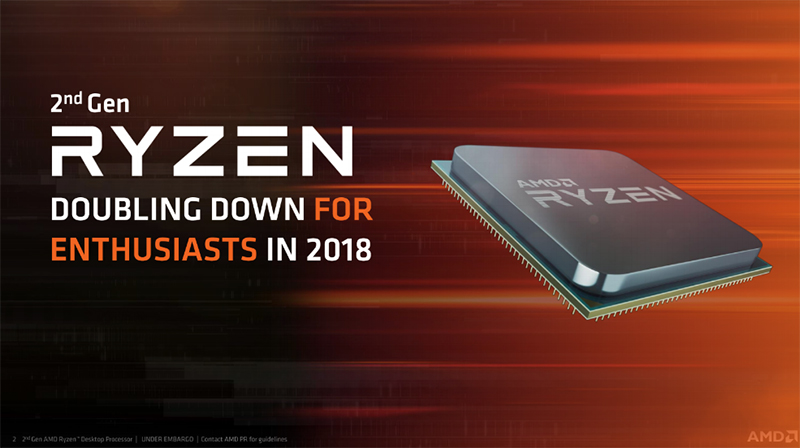 The new desktop CPUs are based on AMD’s updated Zen+ architecture and utilize the new 12nm process technology, which enables improved power efficiency across the entire frequency range. In addition, they now feature higher base clocks across the board, which addresses one of the key weaknesses with the first Ryzen chips.

And like the Ryzen mobile processors announced in October last year, the new desktop chips support Precision Boost 2, which adopts a new turbo frequency model. Instead of sensing how many cores and threads are under load, and working from there to determine voltage, the frequencies are now based on CPU temperatures, current, and load instead.

AMD describes this new algorithm as being more opportunistic, where the chips will provide the best possible turbo frequency, regardless of the number of threads being used. 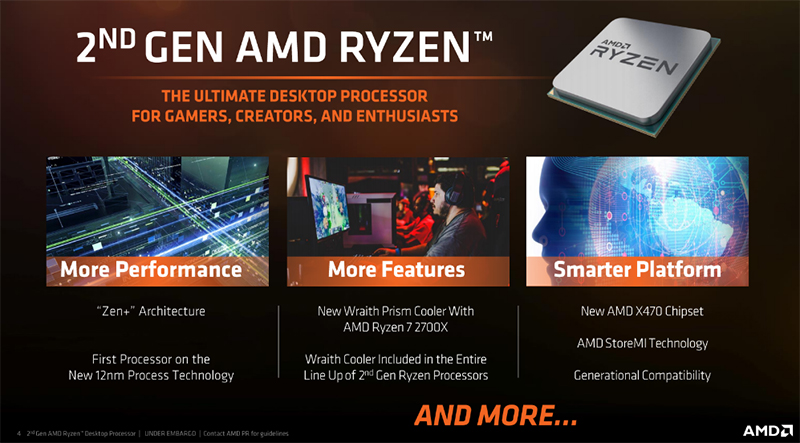 Having said that, AMD has released just four Ryzen 5 and 7 chips so far, and you can find their specifications summarized below:

All the chips come with unlocked multipliers for overclocking, as with the first generation of Ryzen processors.

You'll also notice the inclusion of the new Wraith Prism cooler with the Ryzen 7 2700X. The cooler features some fancy RGB lighting, and you'll find an independent RGB ring that illuminates the entire fan. In addition, it offers switchable fan RPM profiles for more flexibility and a dark mode for those who prefer a more stealthy look.

On top of that, AMD is introducing a new X470 chipset to go with new chips. The chipset will still use the same Socket AM4 as its predecessor, but will offer an improved power infrastructure for the higher clocks on the second-generation Ryzen CPUs.

Furthermore, X470 will support AMD's StoreMI Technology, an intelligent storage software that aims to boost the responsiveness of your system and reduce load times.

It's difficult to not see the parallels with Intel's Optane Memory, and AMD says you can expect benefits like loading your HDD game library at SSD-like speeds. There's no formatting or partitioning required, and the technology is supposedly able to intelligently migrate your most frequently used blocks to the fastest storage in real time.

StoreMI is able take advantage of your system storage resources, including DDR4 SDRAM, NVMe and SATA SSDs, and rotational HDDs. It fuses slow drives to fast drives, and tiers slow file flocks on the fastest drive. A learning algorithm also continuously optimizes your most accessed files.

However, if you change your mind about it, the utility can be easily uninstalled at any time.

The new Ryzen processors will be available to buy on 19 April. Global pre-orders start today.