AMD announces its first 7nm GPUs, but they’re not for gamers

AMD announces its first 7nm GPUs, but they’re not for gamers 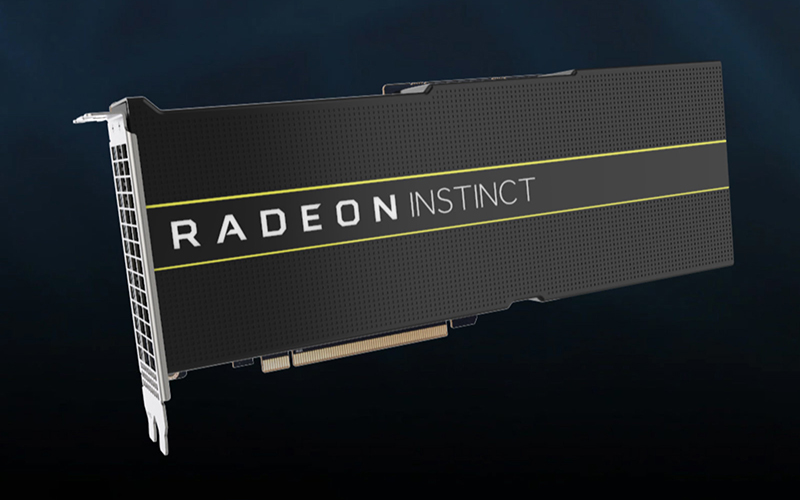 AMD has announced the Radeon Instinct MI50 and MI60, the first 7nm GPUs from the company. The chipmaker first showed off the Vega-based GPUs at Computex, but it seems like we won’t be seeing gaming cards until 2019.

The Radeon Instinct GPUs are built for accelerating highly specialized computing tasks such as deep learning, cloud computing and rendering, and large-scale scientific simulations. Both the Radeon Instinct MI50 and MI60 also feature flexible mixed-precision capabilities, which allow them to address a wider range of HPC and deep learning applications, according to AMD.

They’re also the first GPUs that support the next-generation PCIe 4.0 interconnect, which is supposedly up to two times faster than existing x86 CPU-to-GPU interconnect technologies.

Furthermore, they can take advantage of AMD’s Infinity Fabric Link GPU interconnect that is up to six times faster than PCIe 3.0. The two Infinity Fabric links per GPU are reportedly capable of delivering up to 200GB/s of peer-to-peer bandwidth. They also enable the connection of up to four GPUs in what AMD refers to as a hive ring configuration, comprising two hives in eight GPU servers.

Finally, AMD also announced a new version of the ROCm open-source software platform for accelerated computing. ROCm already supports TensorFlow, so users will be able to benefit from GPU acceleration and an improved machine learning ecosystem.

The Radeon Instinct MI60 will ship to customers by the end of 2018, while the MI50 should arrive in the first quarter of 2019.

Previous Story
The new 11-inch and 12.9-inch iPad Pros have an all-screen design, Face ID, and USB-C
Next Story
Purported video and renders of the Nokia 9 show off a rear penta-camera setup