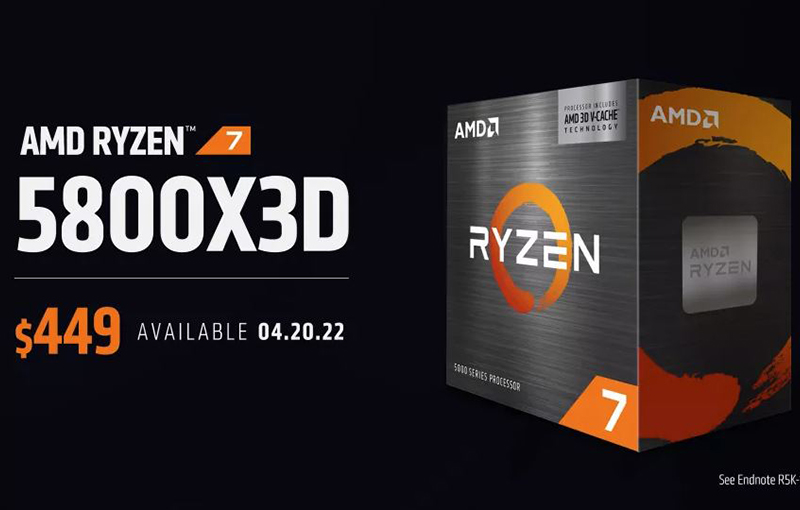 The new chip is basically an upgraded version of the existing Ryzen 7 5800X. But instead of the 36MB of L2 and L3 cache, it now has an incredible 100MB of combined cache. That's thanks to the new 3D V-cache tech, which allows the L3 cache to be stacked vertically, significantly increasing its size while maintaining a small footprint.

AMD is claiming that the new CPU is its fastest ever gaming processor, and should feature a 15% performance boost at 1080p over the 12-core Ryzen 9 5900X.

As it turns out, the chip still costs exactly the same as its predecessor did at launch, so AMD doesn't seem to be charging a premium for its new 3D stacking tech.

Elsewhere, AMD also revealed several new and more affordable Zen 2 and Zen 3 desktop processors. With the exception of the Ryzen 7 5700X, all the chips will ship with an AMD Wraith Cooler. They are expected to be available starting April 4. Here's an overview of the individual models and their specifications.

On top of that, AMD said that it is extending support for Ryzen 5000 series processors on its 300 series chipsets. This means that they will be supported on AMD X370, B350, and A320 chipsets, so users with older systems can still upgrade to the Zen 3 architecture.

Join HWZ's Telegram channel here and catch all the latest tech news!
Our articles may contain affiliate links. If you buy through these links, we may earn a small commission.
Previous Story
NZXT's Lift mouse and Function mechanical keyboard are a great match for its cases
Next Story
Samsung rumoured to debut Super UTG on the Galaxy Z Fold4