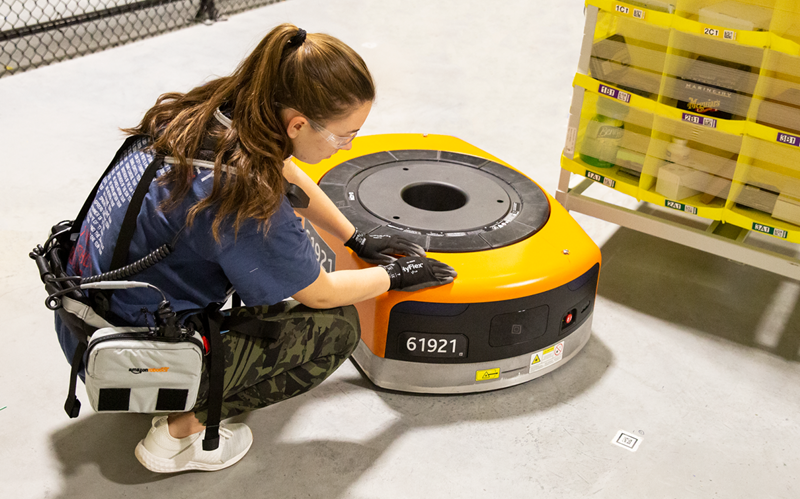 Amazon has built its Robotic Tech Vest to improve workers' safety as they work in close proximity in automated systems. According to TechCrunch, Amazon began introducing the worker wearable since last year.

From the source photo, the Robotic Tech Vest looks more like a utility belt than a vest. This Amazon Robotics-designed product is meant to “keep workers safe” as they work closely with robotic systems. The Robotic Tech Vest has built-in sensors that alert the robotic system to human presence, and the robots will slow down to prevent any mishaps. The sensors also work with the anti-collision system of the robots.

In the United States, the Occupational Safety and Health Administration (OSHA) reports that “many robot accidents occur during non-routine operating conditions, such as programming, maintenance, testing, setup, or adjustment. During many of these operations the worker may temporarily be within the robot's working envelope where unintended operations could result in injuries.”

In Singapore, the Ministry of Manpower’s website contains a list of equipment and machinery, covered under the Workplace Safety and Health (WSH) Act, and it has yet to include robotic systems. As observed by TechCrunch, human and robot interaction will become common in certain workplaces, and it’s better to err on the side of caution when it comes to the safety of humans.

Join HWZ's Telegram channel here and catch all the latest tech news!
Our articles may contain affiliate links. If you buy through these links, we may earn a small commission.
Previous Story
The NVIDIA GeForce GTX 1660 Ti could be nearly 20 per cent faster than the GeForce GTX 1060
Next Story
ESports racer beats former F1 driver in real-life race