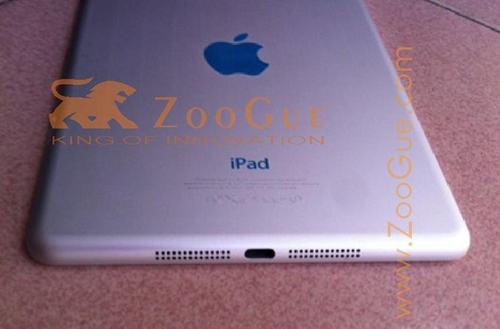 Update: No surprises here, but Bloomberg reports hearing from “two people with knowledge of [Apple's] plans” that the iPad Mini will come with a screen measuring between seven and eight inches, but mentions that it will not have a Retina Display and will not match the pixel density of the new iPad. Instead, it will come with a pixel density of 264ppi, well below the iPhone’s 326.

The iPad mini has been circulating as early as December last year, with rumors intensifying 3 months later, just before the third-gen iPad was launched. Apple watcher iMore has previously reported that the company is indeed preparing a smaller version of 9.7-inch iPad iterations and that it is set for launch in October, priced between US$200 and US$250. There have been many conflicting reports about its form factor with earlier reports point to 7.1- and 7.85-inch form factors; according to iMore, the scaled-down 7.85-inch tablet will feature a display resolution of 2,048 x 1,536 pixels, one that is identical to the panel on Apple’s new iPad.

Despite the fact that authentic pictures of the next-gen iPhone have been supposedly leaked, we have yet to see similar evidence with regards to the iPad Mini... until today that is. ZooGue has obtained what seems to be photos of the iPad mini's rear panel, sparking off a discussion that Apple is not only "going for the same new speaker grille design as on the iPhone 5 components we’ve seen" but will also feature a "smaller dock connector".

However, the source behind the images has also claimed that the tablet will feature a 7.58-inch component, a fact that should  be taken with a pinch of salt given previous rumors and Samsung's supposed faux pas pointing at a 7.85-inch form factor.  Otherwise, it is safe to say that if the iPad Mini does exist, it will be in the 7-inch and more range. Nonetheless, this is less questionable than the fact that the Apple logo and iPad name are in a shade of blue when these are traditionally featured in black - have the photos been modified in some way or are they fakes?

The alleged next-gen iPhone and the iPad mini is said to be arriving in September, but that's not that there is to look forward to. Facebook integration and redesigned digital stores will be part of the iOS 6 (codenamed "Sundance") lineup of changes, amidst previously reported updates like the release of a Siri .apk, Siri voice functions on iPad, and a proprietary, in-house maps application with 3D mapping features.

Join HWZ's Telegram channel here and catch all the latest tech news!
Our articles may contain affiliate links. If you buy through these links, we may earn a small commission.
Previous Story
Apple Faced with Temporary Closure in Italy
Next Story
Nexus 7's Battery Performance Superior to Kindle Fire's