MSI has readied a total of 10 Z390 motherboards: The company has also given its naming scheme a fresh coat of paint with a rebranding of sorts. There are now three different categories of boards – MEG, MPG, and MAG – that correspond to its Enthusiast, Performance, and Arsenal Gaming segments respectively. This roughly matches up with MSI's conception of enthusiast, mid-range, and entry-level boards, and there's now a much clearer indicator as to where a board stands in the product line-up.

We first saw a MEG board in the form of the MEG X399 Creation, which in hindsight was an indicator of MSI's intentions for its motherboards going forward.

The crowning glory of MSI's Z390 series is the MEG Z390 Godlike. It's crammed full of features, including an M.2 Xpander card for two additional M.2 drives (for a total of five) and a dedicated capture card for streamers. This is also an E-ATX board, so MSI has had plenty of space to add whatever it wants, including four full-length PCIe slots with three M.2 sockets in between them. Each M.2 socket also has its own dedicated heatsink to prevent thermal throttling.

This is basically the only MSI Z390 board to support four-way CrossFire. There's also an extra 6-pin PCIe input to supply additional power to your graphics cards.

There are a further six SATA 6Gbps ports and a U.2 port. The latter probably won't see much use, but MSI clearly wanted to cover all its bases.

Another nice feature is the dual Realtek ALC1220 codecs, one each for the rear panel and front panel audio. In addition, there's dual LAN ports powered by two Killer E2500 Gigabit networking controllers. You also get 802.11ac Wi-Fi, courtesy of a Killer Wireless-AC 1550 adapter.

To cap things off, it is equipped with a 18-phase VRM power design, which makes it quite an overclocking beast, on paper at least. 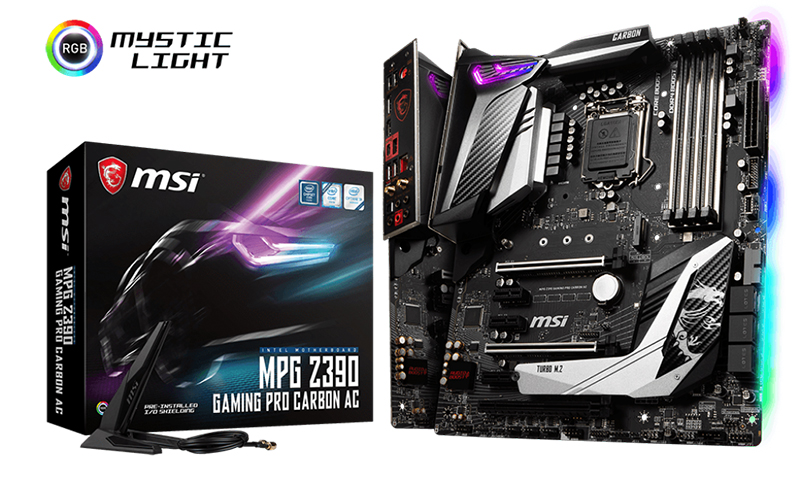 However, it's probably the mid-range MPG Z390 Gaming Pro Carbon AC that will draw the largest audience. It's the top model in the MPG series though, so you still get plenty of premium features at a more palatable price tag. This means Intel Gigabit LAN and a 2x2 Intel Wireless-AC 9560 networking adapter, in addition to metal-reinforced PCIe and DIMM slots.

It has two M.2 sockets, which will work with both PCIe and SATA SSDs, on top of six SATA 6Gbps ports. It also has more USB connectors than the rest of the MPG range, including three USB 3.1 (Gen 2) Type-A and one USB 3.1 (Gen 2) Type-C port on the rear I/O. You'll also find a further two USB 2.0 ports at the back.

There's also a version of the board without Wi-Fi, so you can save some money if you don't need that feature.