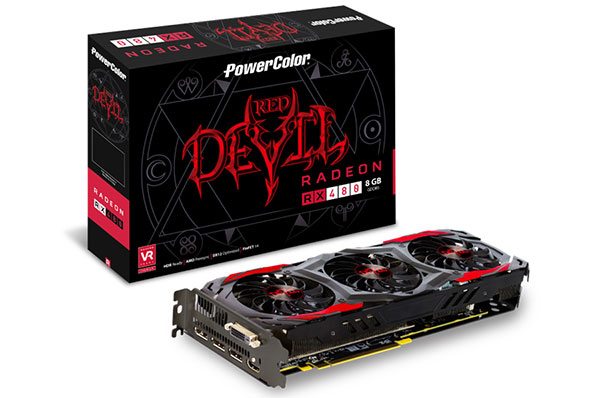 PowerColor has announced the Radeon Red Devil RX 480, which just might be one of the fancier-looking custom RX 480s around.

It uses a triple-fan Double Blade III thermal solution, which comprises two 8mm and two 6mm nickel-plated heatpipes that are in contact with the copper baseplate. The fans themselves are 80mm affairs that utilize a double ball bearing design for greater reliability and longevity. As it turns out, the card is actually a good 55mm longer than the reference design which sports just a single blower fan, so that’s something to take note of if you’re looking to install it in a small form factor chassis.

Instead of a single 6-pin connector, PowerColor opted for an 8-pin power connector to supply additional power and help you to push the clock speeds further. However, PowerColor has retained the same 6+1 phase power design as the reference card, so it lags behind the other custom cards with additional power phases in this respect. Still, PowerColor may very well have used better quality power regulation components, and its more robust cooler could help it overcome these shortcomings.

Another nice touch is the built-in BIOS switch that makes it easier to recover from failed overclocks. The switch can also be used to toggle between two different clock speeds.

The card ships with a factory overclock to the tune of a 1,330MHz boost clock, up from 1,266MHz on the reference design.