The Alienware Aurora has been reinvigorated with the latest performance processors and graphics. 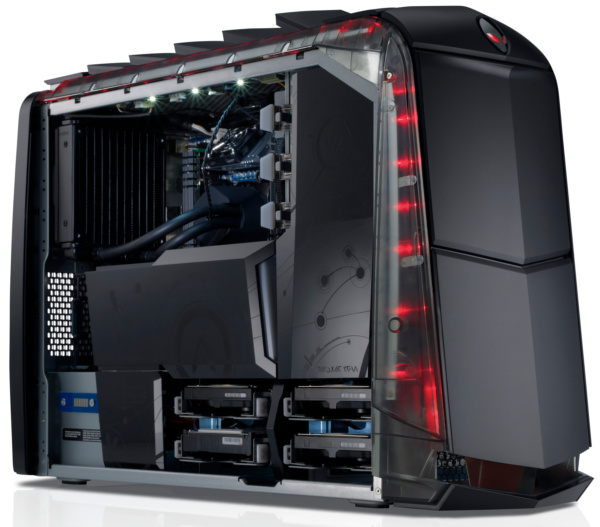 The improved Aurora now comes with the most recent Intel Core i7 processors including an Extreme Edition option, processors with as many as 6 cores and 15MB of cache, and overclock speeds up to 4.3GHz with Turbo Boost technology. These new options are part of Intel’s new IvyBridge-E 4000-series family of processors announced at IDF 2013 earlier this month.

Additionally, the gaming desktop is fused with the latest NVIDIA GeForce 700-series graphics or AMD 8900-series graphics; both provide support for immersive experiences, whether multi-display, 3D or higher resolutions beyond 1080p gaming. Gamers are covered when it comes to future upgrades with support for quad-channel DDR3 memory; players can also increase speed and capacity by adding additional HDDs or SSDs within the 4 internal drive bays.

The innovative ALX chassis (that's available as an option) features an intelligent thermal management system that monitors key locations within the chassis to ensure heat is being dissipated optimally. The active vents at the top of the chassis open, as if the system is coming to life, to provide additional heat dissipation when required. The ALX chassis’ premium CPU liquid cooling enables overclocking and lower operating temperatures, while meticulous details like internal theater lighting and tool-less, cable-free hard drive caddies support easy upgrades.

The updated Alienware Command Center software provides intuitive, user-friendly access to Alienware-exclusive applications and controls in one centralized hub. Command Center includes the exclusive AlienFX lighting control system which allows users to create their own custom lighting themes and special effects. With the ALX chassis, gamers will have up to 20 colors to choose from across 8 different lighting zones, totaling to over 25 billion possible lighting combinations.

Alienware has worked with game developers to incorporate AlienFX in over 60 game titles. Whether healing, taking damage, or completing missions, AlienFX lights are an extension of the game play. Alienware Command Center also features AlienAdrenaline, a custom game and application launcher, a system performance optimizer and a performance monitoring tool, as well as AlienFusion advanced power management and Thermal and Active Venting controls.

The new Alienware Aurora is available immediately on Dell.com.sg. Entry configuration now offers double the amount of storage (from 1TB to 2TB) over the previous generation, in addition to the unlocked and overclocked Intel Core i7-4820K Ivy Bridge-E processor, and an NVIDIA GeForce GTX760 1.5GB DDR5 graphics card, starting from S$3,199.