Despite its awkward design and slightly expensive price tag, the AirPods managed to achieve 98% satisfaction rate in a user study conducted by Experian and Creative Strategies.

Based on a survey of 942 owners, Experian and Creative Strategies reveals that 82% rated the wireless earbuds as "very satisfied" while another 16% indicated "satisfied". Both numbers add up to an overall score of 98%, which is actually the highest level of satisfaction for a new product from Apple. In comparison, the first generation iPhone and iPad had a 92% satisfaction level while the original Apple Watch attained 97%.

When asked whether they would recommend the AirPods to others, a majority of AirPod owners said "yes". This translates to a Net Promoter Score (NPS) of 75, which is higher than that of the iPhone (72). To put these two figures into context, product and NPS specialists state that any score above 70 is world class.

The high satisfaction rate and NPS can be attributed to the fit, sound quality, convenience and battery life. Most users also shared how they were impressed by the pairing process and the superior experience of using the AirPods. 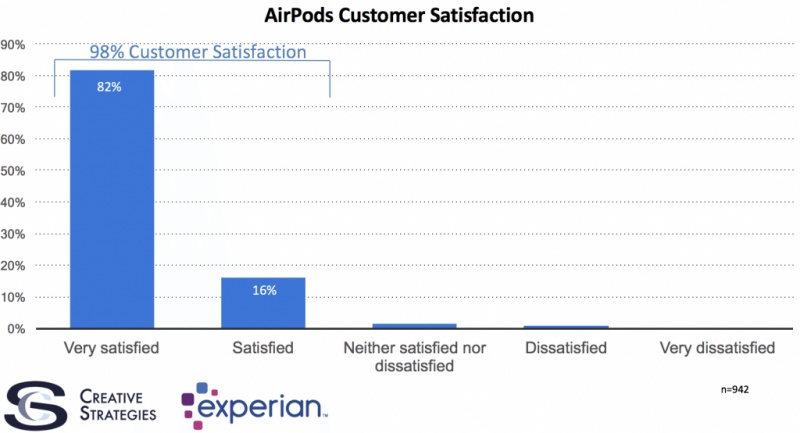 Join HWZ's Telegram channel here and catch all the latest tech news!
Our articles may contain affiliate links. If you buy through these links, we may earn a small commission.
Previous Story
This is how Fitbit's new smartwatch and earphones will look like⁠⁠⁠⁠
Next Story
iRobot unveils two new vacuum cleaners with Wi-Fi connectivity