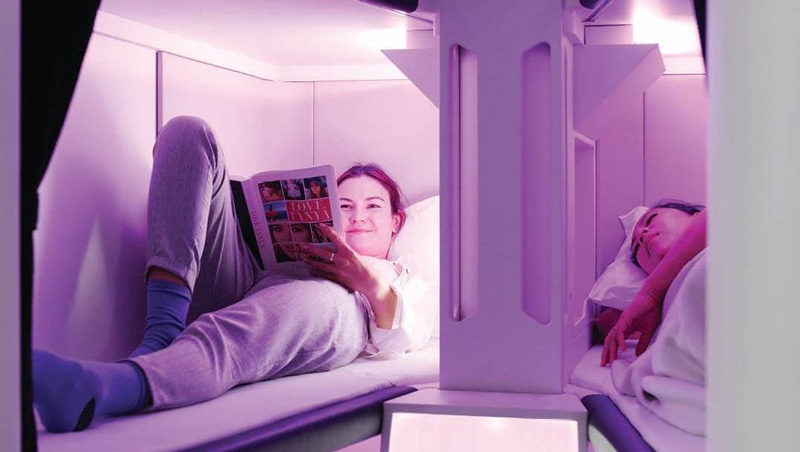 The lives of travellers who frequently fly economy-class are about to get a whole lot easier. Air New Zealand just unveiled a new sleeping pod prototype titled the ‘Economy Skynest’. This new space will include six full-length and lie-flat sleeping pods in economy cabins.

This will surely help with long back-and-forth flights, such as the airline’s upcoming Auckland-New York flights, which will take up to 18 hours. Instead of sitting in uncomfortable chairs with little-to-no space, passengers can now simply sleep those 18 hours away. Unfortunately, Air New Zealand will face some issues getting this new concept of theirs to take flight (pun very much intended).

The Economy Skynest is going to be a costly endeavour to make happen, and the airline will have to go up against all sorts of safety rules and requirements which have stopped other creative seating options from existing. The editor-in-chief of website Executive Traveller commented:

Despite the pretty pictures, this is likely to be a lengthy and arduous certification process. There's a certain appeal to these railway-style sleeping berths, although it's highly unlikely that passengers could strap themselves into these bunks for take-off and landing.

He’s got a point. Either way, the airline will apparently only make their final decision on introducing the Economic Skynest in 2021 - after seeing how the Auckland-New York flights perform. Fingers crossed!

Join HWZ's Telegram channel here and catch all the latest tech news!
Our articles may contain affiliate links. If you buy through these links, we may earn a small commission.
Previous Story
March 2020's PlayStation Plus freebies include one of the best games ever made
Next Story
Kazuhisa Hashimoto, creator of the infamous Konami code, has died at 61