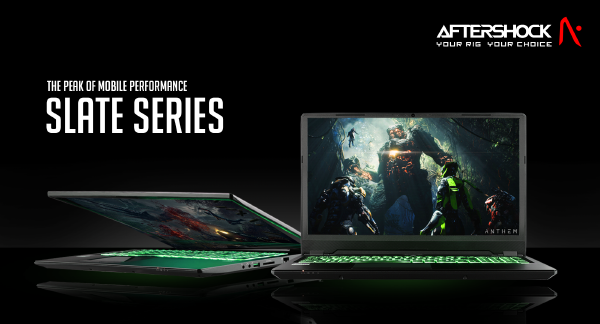 The Slate series is made up of the Slate 15 and Slate 17. The name Slate is apt because of the notebooks' thinness. Both notebooks are only 19.9mm thick. The Slate 15 weighs 2kg while the larger Slate 17 is 2.5kg.

Let's talk a little about the Slate 15 because, despite the name, it actually has a 16.1-inch display. Thanks to slim bezels, Aftershock was able to fit a larger display while keeping overall dimensions similar to typical 15-inch notebooks.

The Slate 17 will feature a more standard 17.3-inch display. Both notebooks' displays are Full-HD, supports 100% of the sRGB color space, and have a high refresh rate of 144Hz.

As for the internals, both notebooks will be powered by the hexa-core Intel Core i7-8750H processor. Users will also be able to spec their machines with up to 32GB of memory. As for storage, the notebooks feature two M.2 PCIe SSD bays and a single 2.5-inch HDD bay.

The notebooks will feature the latest NVIDIA RTX graphics. Users can choose from the following:

Other interesting features include the improved thermal management system which features what Aftershock calls "next generation Crystal Moulded Fans." With this, airflow is increased by up to 40%, which in turns translates to a 35% increase in thermal performance. Also cool is the glass trackpad with biometric security, which allows owners to quickly unlock their systems.

And if you are a fan of RGB lighting, you'll be happy to know that the Slate notebooks feature per key RGB lighting.

The recommended configurations of the Slate 15 and Slate 17 are as follows:

Prices of the Aftershock Slate notebook will the above configurations will start at S$2,399 for the Slate 15 and S$2,525 for the Slate 17. They are available now.

Join HWZ's Telegram channel here and catch all the latest tech news!
Our articles may contain affiliate links. If you buy through these links, we may earn a small commission.
Previous Story
Apple’s video streaming service could launch in early Q2
Next Story
PSA: Disable FaceTime now as bug lets others hear you before you accept it