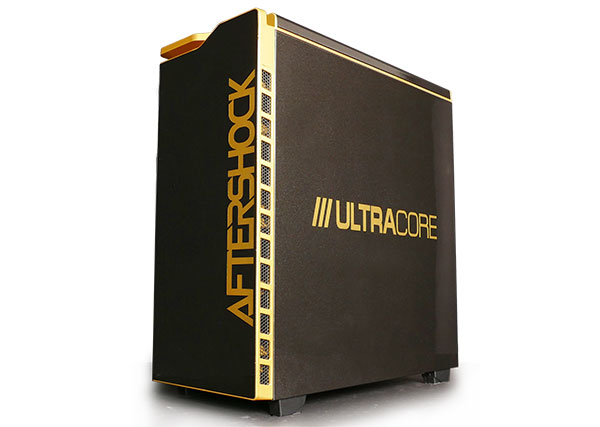 The long-running debate over the merits of DIY and boutique gaming PCs has been hashed out so many times that there’s little point in returning to it now. But whatever your thoughts about the issue, we’re pretty sure you can appreciate what Aftershock PC has done with the Ultracore, its latest pre-built desktop system targeted at gamers who demand bleeding edge performance.

In a nutshell, the Ultracore is a boutique gaming PC that allows customers to put their own personal stamp on the rig. This doesn’t mean something as mundane as picking out the individual components of the system. Instead, you get a custom paint job and a liquid cooling loop that have been set up to your exact specifications.

With that said, the highlight of the Ultracore is probably its support for a fully custom open loop liquid cooling setup. Unlike the closed loop AIO CPU cooler that we saw on the ASUS ROG GT51, this is the real deal that will also serve up a whole lot more cooling performance to both the CPU and GPU.

One thing to note about open loop systems is that there are a wide variety of configurations – and looks – available, which is why Aftershock is allowing customers to have a say in it all, down to small details like the color of the coolant. The aim is to make custom liquid cooling more accessible, as the prospect of putting together your own custom loop (not to mention sourcing the necessary parts) might seem pretty intimidating to more than a few folks. 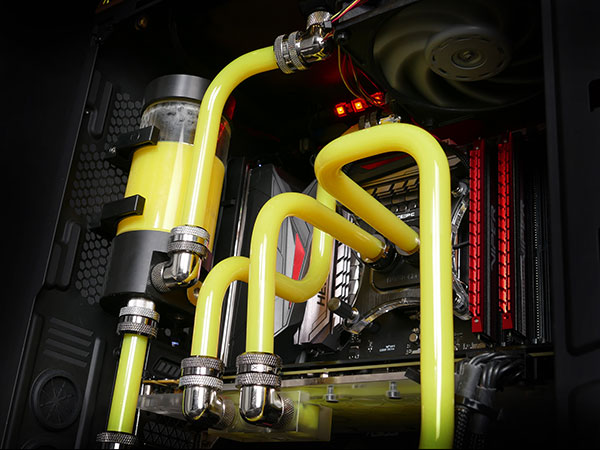 For the custom paint job, Aftershock relies on automotive finishes, the same as that used on your car. When paired with the custom liquid cooling loop, you can easily build a color-coordinated system, and you also don’t have to worry about paint flaking off in the long run. When it comes to the hardware, you can choose between Intel Core i7 processors or Extreme Edition chips. But the real kicker is the graphics card in the form of the NVIDIA GeForce GTX 1080, the new single-GPU king. Aftershock will even let you order two of these in SLI – NVIDIA now officially only supports two-way SLI – so you can truly run any game you care to throw at it.

Other specifications include up to 64GB of DDR4 2,133MHz memory and a total of five drive bays for storage expansion. Aftershock will also include an ASUS PCIe Wi-Fi add-in card, so you aren’t limited to using a wired connection.

Naturally, all this doesn’t come cheap, and the Ultracore has a starting price of S$3,000. It will launch at the upcoming PC Show with the following specifications (pricing to be announced at a later date):

Join HWZ's Telegram channel here and catch all the latest tech news!
Our articles may contain affiliate links. If you buy through these links, we may earn a small commission.
Previous Story
Sony enhances home cinema audio with the new HT-RT3 sound bar *updated with pricing*
Next Story
New Pebble 2 and Pebble Time 2 smartwatches are now on Kickstarter