In addition to the Nokia 9 PureView with five rear cameras, HMD Global Oy has also announced the Nokia 4.2 and 3.2 Android One phones. Priced between US$100 and US$200, both phones come with more refined designs, upgraded displays, faster chipsets, and modern features such as face unlock compared to the existing Nokia 3.1 series.

Let’s start with the Nokia 4.2, which is an entirely new addition to the portfolio. Powered by the Qualcomm Snapdragon 439 SoC with up to 3GB RAM and 32GB eMMC storage (expandable with microSD), this phone features a 5.71-inch, 1,520 x 720-pixel, nearly all-screen display with 2.5D glass front and back sandwiching the metal internal frame and polycarbonate frame. You also get a 13-megapixel rear camera (with a secondary 2MP sensor that captures depth data); an 8MP, F2.0 selfie camera hidden within a water droplet-sized notch; a fingerprint sensor on the back; and NFC support. Available in black and pink sand color options, the Nokia 4.2 will begin shipping in April for US$169 for the 2GB RAM/16GB storage model and US$199 for the 3GB RAM/32GB storage model.

But that's not all. Also debuting on the Nokia 4.2 is a notification light that’s built into the power button. So even when you lay the phone face down on the table, you can tell that a notification has come in from the pulsating LED.

You’ll also find on the side opposite the power button a dedicated Google Assistant button. A single click of this button launches Google Assistant; a double-click will bring up Google Assistant’s Visual Snapshot (basically a feed that shows what your day will look like); while a press-and-hold will launch the Assistant’s walkie-talkie function for sending voice messages.

Since this is an Android One handset, you can expect more Google software out of the box. Google Lens and Google Photos are two of them, and like the newer Pixel and Motorola phones that support portrait photos, photos taken with the Nokia 4.2 and Nokia 3.2 can use Google Photos’ new depth editor to adjust the background blur and change the focus of their portrait photos. The AI-driven Color Pop, which keeps the main subject in color but the background in black-and-white, also works on the new phones.

For the front-facing camera, the Nokia 4.2 is using a 8MP module and it uses AI to drive the face unlock feature. HMD stresses that the phone’s facial recognition system is “spoof- and fraud-resistant”, and that all the processing is done on-device. 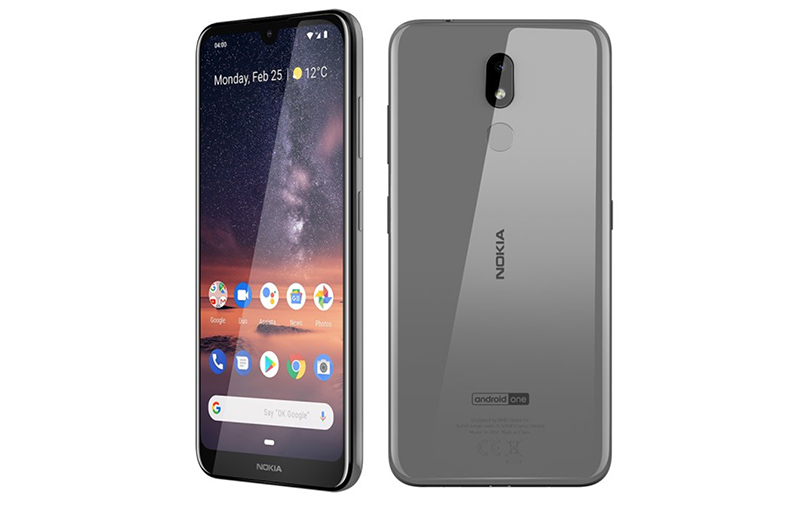 Finally, there’s the Nokia 3.2, which is coming in May. While it sits below the 4.2 in the lineup, the 3.2 is a bigger phone with a 6.26-inch display (but same 1,520 x 720-pixel resolution). Like the Nokia 4.2, it runs Android Pie, has a power button with built-in notification light, includes a Google Assistant hardware button, and supports face unlock. But there are tradeoffs: while it also has a 13MP rear camera, it lacks the 4.2’s depth sensor; and the selfie camera is a 5MP module. And instead of the octa-core Snapdragon 439, the 3.2 uses the quad-core Snapdragon 429. Lastly, the rear shell is made of glossy polycarbonate instead of glass. Two colors are available for the Nokia 3.2: black and steel (gray).

Still, the Nokia 3.2 should appeal to folks looking for an affordable big-screen phone with a large battery. Thanks to its 4,000mAh battery and software optimizations (e.g., the Adaptive Battery feature in Android 9 Pie), the Nokia 3.2 can last up to two days on a single full charge. Finally, note that the 2GB RAM/16GB storage version that costs US$139 doesn’t come with a rear fingerprint sensor, though you can pony up a bit more and get the 3GB RAM/32GB storage model (US$169) that does have it.

Join HWZ's Telegram channel here and catch all the latest tech news!
Our articles may contain affiliate links. If you buy through these links, we may earn a small commission.
Previous Story
The Nokia 9 PureView has a Snapdragon 845 chip, five rear cameras, and no camera bump
Next Story
Huawei's new MateBook X Pro is among the first to come with an NVIDIA GeForce MX250 GPU