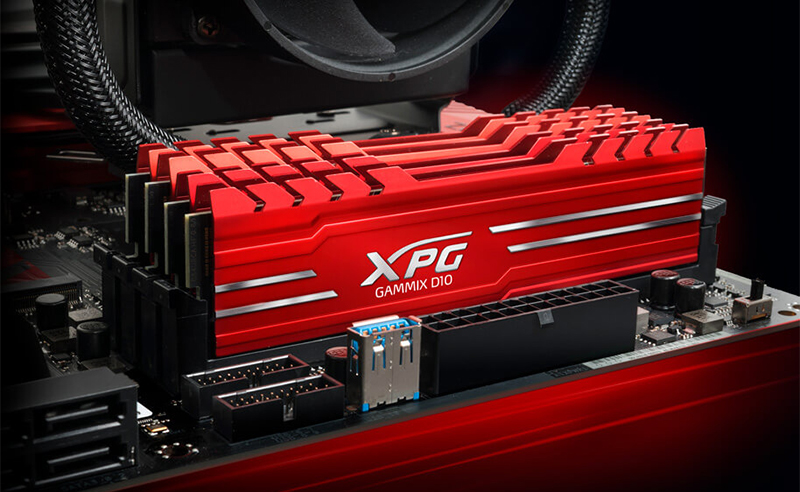 Adata has announced the launch of the Gammix D10 DDR4 memory modules as part of its XPG Gammix product series, which also includes the likes of the Gammix S10 PCIe SSD.

The XPG brand stands for Xtreme Performance Gear, and it houses products that Adata says offer better stability and performance for gamers, enthusiasts, and overclockers.

These memory modules are fairly low-profile, measuring just 36mm tall, so they will work with larger air coolers and smaller cases.

They are available in frequencies ranging from 2,400MHz to 3,000MHz and in capacities up to 64GB.

The open-top heatshield with serrated edges creates a more aggressive look that will appeal to gamers, and you can get it in either black or red to match your other components.

Both colors ship with a black 10-layer PCB, and there’s an additional copper layer internally that Adata says helps with cooling.

The Gammix D10 memory has an operating voltage of 1.2V and supports both Intel’s new X299 platform and AMD Ryzen. However, the DDR4-3000 kits actually have a higher voltage of 1.35V.

On top of that, Adata also announced the XPG Spectrix D40 RGB series of memory, which comes decked out in RGB LEDs that can be controlled by ASUS' Aura Sync software. Both the D10 and D40 memory modules implement SPD 2,666MHz, so they will default to 2,666MHz when paired with compatible processors such as Intel's new Core i9 chips. That said, Adata claims that the D40 Spectrix modules can be overclocked to over 4,000MHz on air.

The Spectrix joins the growing ranks of LED-equipped DDR4 RAM kits on the market, which includes things like the G.Skill Trident Z RGB, Corsair Vengeance RGB, and GeIL EVO-X RGB.

We’ll update when we have news on local availability and pricing.

Join HWZ's Telegram channel here and catch all the latest tech news!
Our articles may contain affiliate links. If you buy through these links, we may earn a small commission.
Previous Story
Essential Phone might be available in more markets outside the U.S
Next Story
Amazon may be launching its own messaging app