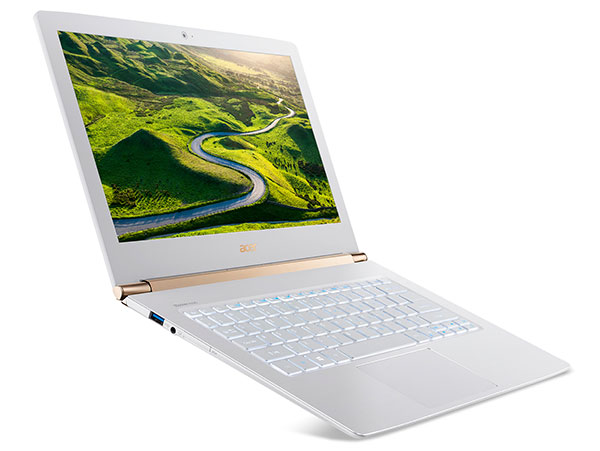 Acer just went on quite a roll in New York City. In addition to new Predator Gaming products and the liquid-cooled Switch Alpha 12 2-in-1 hybrid, the company also announced updates to its Aspire line-up, including the sleek Aspire S 13 that clearly aims to take the fight to laptops like the HP Spectre with a more palatable price.

The new Aspire S 13 appears to be the latest contender in the race to make notebooks slimmer and more portable than before. However, at US$699, it offers a balance between price and absolute portability and doesn’t attempt to break the mold with record-breaking thinness. It is 14.58mm thick, compared to the HP Spectre’s 10.4mm, but it’s still a hair thinner than the Dell XPS 13’s 15mm.

Unfortunately, Acer was sparse on the details when it came to its specifications, and all we know is that it will come with sixth-generation Intel Core processors, up to 8GB of LPDDR3 RAM, and support 2x2 MU-MIMO. It will also have a FHD IPS display and a USB Type-C port, but it’s not clear if the latter will also double as a charging port.

On top of that, Acer also announced new E-, F-, and R-series notebooks. These will be similarly equipped with sixth-generation Intel Core processors, and feature discrete NVIDIA mobile GPUs. All of these notebooks will also have USB Type-C ports and DDR4 RAM, making the Aspire S 13 the only new Aspire notebook to have LPDDR3 memory.

All the new Aspire models have been aggressively priced to make them more competitive. The E-series notebooks start at US$400, while the single F-series notebook announced – the F5-573 – will cost US$499. Finally, the base model for the R 15 convertible will cost just US$700, with the sleek S 13 rounding out the line-up at US$699.

Only the US and Europe, Middle-East, and Africa will be getting the R 15. There’s no word on local pricing and availability yet for the other models.

Join HWZ's Telegram channel here and catch all the latest tech news!
Our articles may contain affiliate links. If you buy through these links, we may earn a small commission.
Previous Story
Xiaomi partners with UnionPay to launch mobile payment service in China
Next Story
Samsung announces the Galaxy J1 (2016) for Singapore