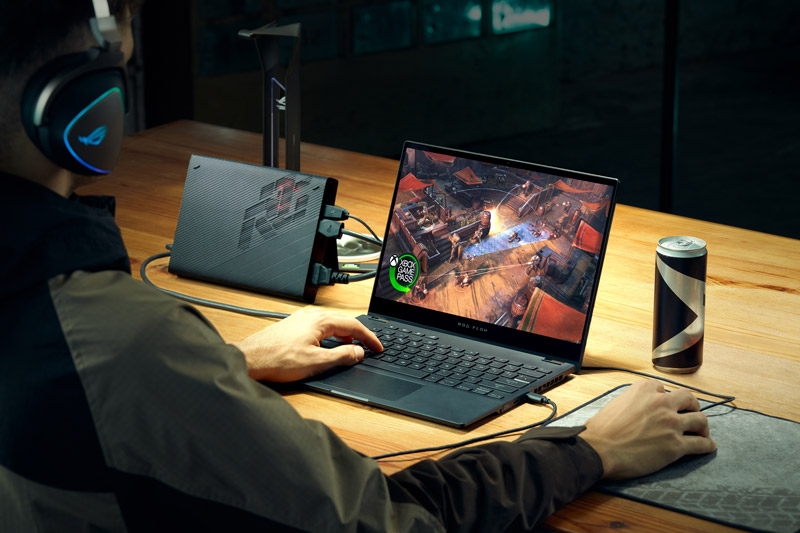 At a glance, the ROG Flow X13 (GV301) may look just like your standard notebook. But don’t let its svelte and sleek design fool you; the Flow X13 (GV301) is a power-packed gaming notebook that does not sacrifice portability – unlike other gaming notebooks of the same ilk. For one, it’s not even a standard notebook but an ultraportable 2-in-1 gaming convertible notebook with a flip design that allows you to take your gaming (or work) anywhere and everywhere.

Here are five other reasons why the ROG Flow X13 (GV301) is quite possibly the only gaming notebook you should lust after in 2021. 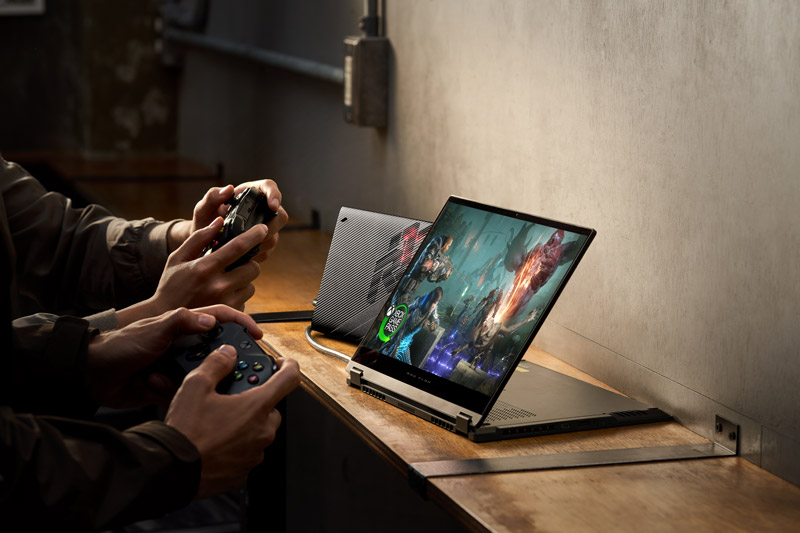 The ROG Flow X13 (GV301) is the first convertible gaming notebook with a 2-in-1 flip design, and it takes it to the extreme as it's certainly slim and sleek at the same time. This makes the Flow X13 (GV301) an extremely versatile gaming notebook. Its 299 x 222 x 15.8mm dimensions and 1.3kg weight allows it to fit into all but the smallest handbag. Need more space at the cramped Starbucks's coffee table? Simply prop up the notebook in “tent mode” and you’ll have plenty of table space for your cup of coffee latte and a plate of croissant sandwich, while you watch your favourite YouTuber's latest stream or the latest episode of WandaVision on Disney+. 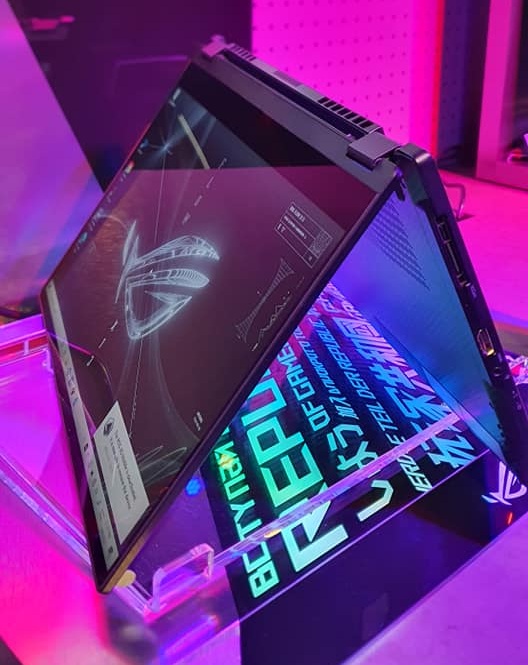 The ROG Flow X13's versatility is a crowning achievement in the gaming notebook space.  Did we also mention that the notebook has up to 13 hours of battery life? That's more than enough for you to binge through the entire season of WandaVision wherever you may be.

The most versatile gaming notebook for gamers and content creators 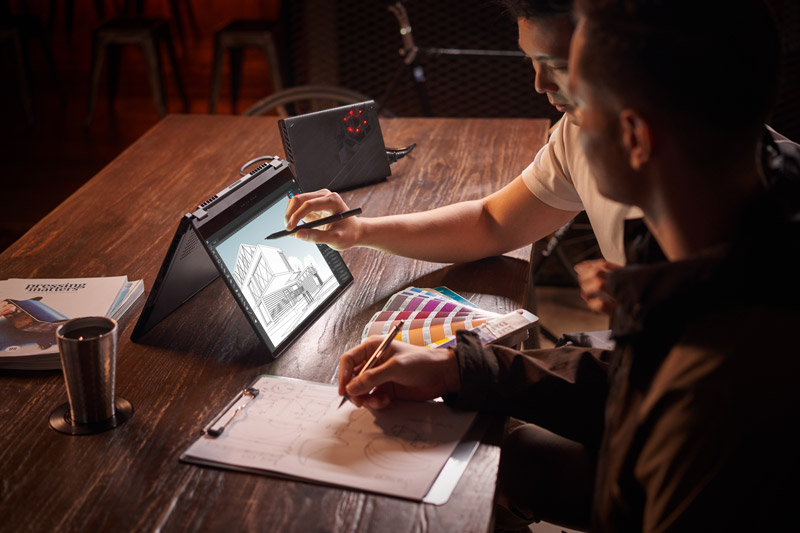 When you're using a 360-degree-rotating 2-in-1 in tent or tablet mode, you don't have access to the keyboard, so touch input is essential in those modes. The ROG Flow X13 (GV301) comes with a 13.4-inch 4K WQUXGA touch display (3,840 x 2,400 pixels resolution) that’s also PANTONE colour validated. The display boasts a 16:10 aspect ratio that gives you more vertical space for toolbars and tabs so it feels larger than the display size sounds. The scratch-resistant Gorilla Glass touchscreen features stylus support (also included in the package) that’s great for note-taking, sketches and literally any content creation tasks you throw at it. This makes it the perfect companion for content creators who specialises on gaming mediums.

It gives an unfair audio advantage to gamers 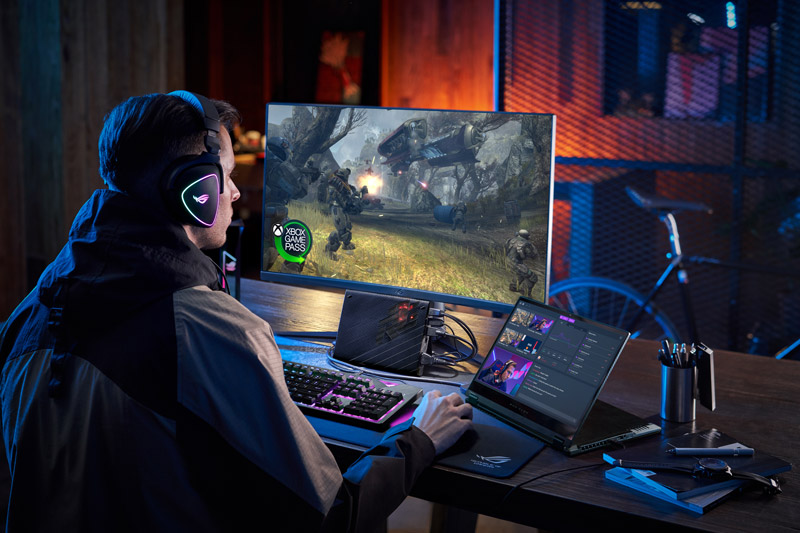 Movie lovers should be more than familiar with Dolby ATMOS audio technology by now. In the ROG Flow X13 (GV301), Dolby ATMOS creates breathtaking realism with optimized sound for greater detail and maximises loudness without distortion from the gaming notebook’s integrated speakers. This setup delivers balanced audio be it for movies, music or games without losing clarity or detail.

But believe it or not, Dolby ATMOS is also an unfair advantage for gamers who have it. It brings moving audio that flows above and around you with greater depth. Coupled with the Smart Headphone Amp technology in the ROG Flow X13 (GV301), not only will you be able to hear footsteps clearly in your games, but you’ll also be able to distinguish your foe’s position just by listening to the direction of the bullet that whizzed by you. That is what we call an unfair advantage.

It’s got the most powerful mobile gaming CPU inside 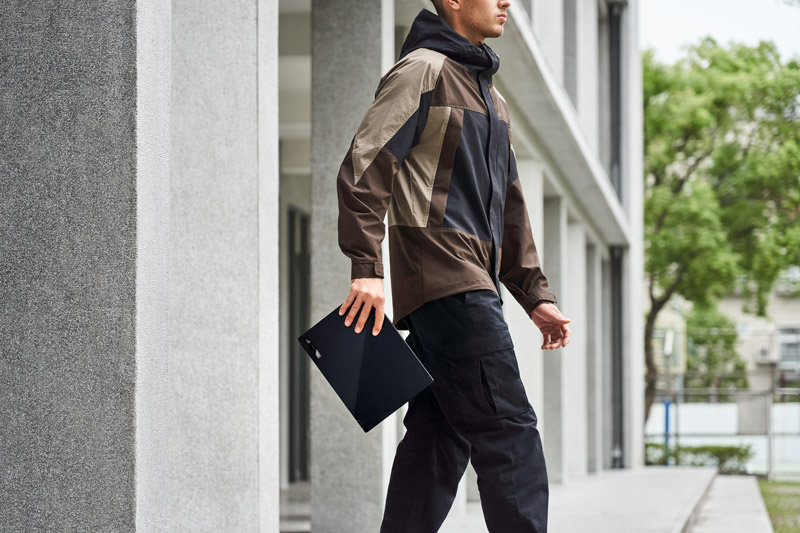 If you’ve been impressed by AMD’s Zen 3-based Ryzen 5000 series processors, well guess what? The ROG Flow X13 (GV301) is the first gaming notebook to be powered by one of AMD’s new Ryzen mobile processor – the Ryzen 9 5980HS. It’s more than enough power to meet demanding workloads, such as video editing, 3D rendering, and even heavy multitasking like gaming and streaming simultaneously.

For graphics, it comes with an NVIDIA GTX  1650 GPU that’s more than enough for most of today’s popular games like Counter-Strike: Global Offensive, League of Legends or even Fortnite. Up to 32GB of blazing-fast DDR4X-4266 RAM across dual channels also means there is enough headroom for bigger projects too, and the 1TB NVMe SSD offers minimal load times for a huge library of games and apps.

But of course, if you want to enjoy heavyweight titles like Cyberpunk: 2077, The Medium, Watch Dog: Legion and so on then you’re going to have to bring in the real firepower. Read on.

Want more GPU firepower? You have it 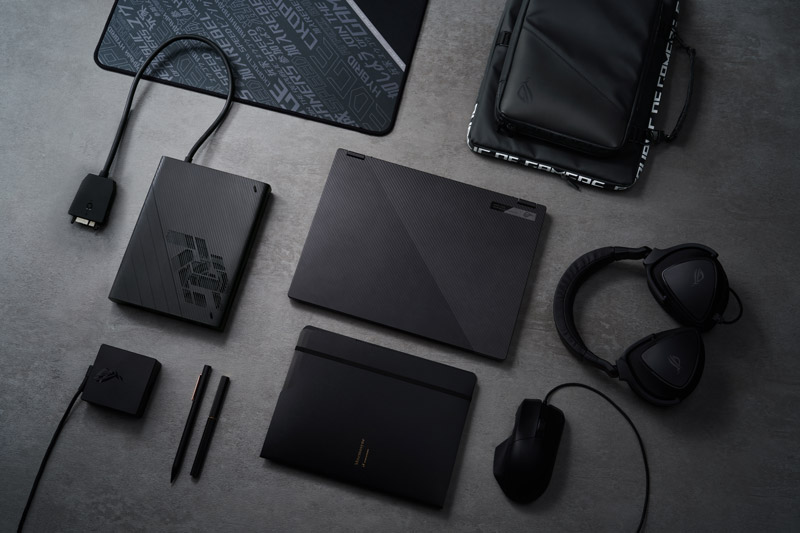 The ROG Flow X13 (GV301) transforms into a mobile gaming powerhouse when paired with the external GPU, the ROG XG Mobile. Powered by the top-of-the-line NVIDIA GeForce RTX 3080 graphics processor, the XG Mobile is an eGPU like no other we have seen before. For one, at only a scant 29mm thick and barely 1kg in weight it truly lives up to its “mobile” moniker – unlike most of today’s cumbersome eGPU that are larger than even desktop-replacement gaming notebooks. The XG Mobile is the smallest eGPU ever, bar none. This also allows it to be carried around in a backpack with the ROG Flow X13 (GV301) gaming notebook easily, allowing you to enjoy your heavy gaming sessions, with all the ray tracing and DLSS bells and whistles no less, at home or even at a café. Because, why not? 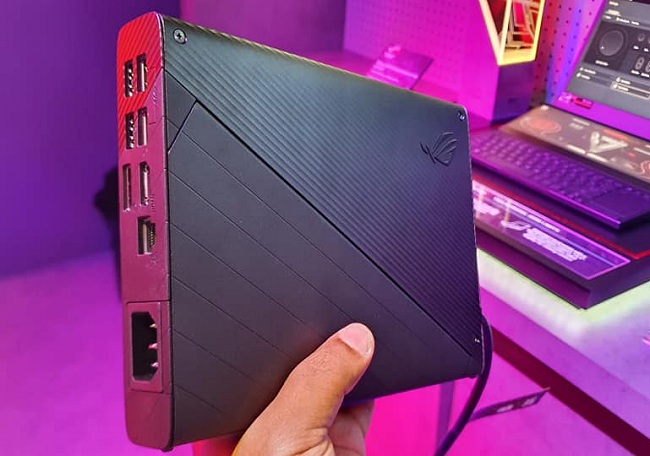 That’s only half the story. The XG Mobile also acts as a multi-port to the ROG gaming notebook, with four USB Type-A 3.2 Gen 1 ports, a full-sized SD card slot, and a Gigabit Ethernet port. DisplayPort 1.4 and HDMI 2.0a display outputs connect directly to the external GPU. An integrated 280W power adapter supplies the XG Mobile and ROG Flow X13 (GV301) simultaneously, so you’ll never have to carry a separate power brick.

Together with the XG Mobile, the ROG Flow X13 (GV301) is the perfect gaming notebook that defines what it means to have both power and portability. Whoever said you cannot have both?

To find out even more about this innovating notebook, design philosophy, and more close-up photos of what to expect out of the whole package, head over to the ASUS ROG Flow X13 product page!

Our articles may contain affiliate links. If you buy through these links, we may earn a small commission.
Previous Story
20 Bethesda games have joined Xbox Game Pass after acquisition by Microsoft
Next Story
Magna and Foxconn said to be main contenders for Apple Car partnership