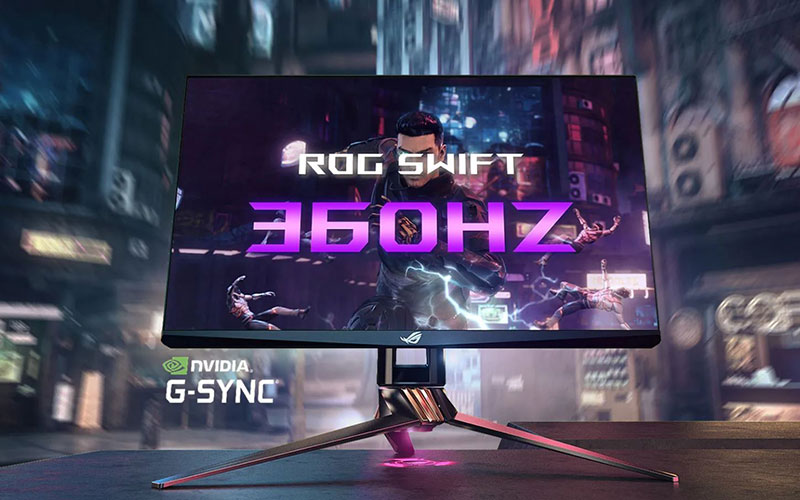 NVIDIA's new Reflex low-latency tech promises to bring an even more responsive experience to competitive shooters, and a crop of new monitors from the likes of Acer, Alienware, ASUS, and MSI are coming to let you make full use of all its features. These are all 24.5-inch esports-oriented screens, with a modest 1,920 x 1,080-pixel resolution. The highlight is their blazing fast 360Hz refresh rate, and they will also be the first to properly support NVIDIA's Reflex Latency Analyzer, which lets you measure end-to-end system latency without the use of complex and expensive equipment.

The Acer Predator X25, Alienware 25, ASUS ROG Swift PG259QN and MSI Oculux NXG253R will all be G-Sync monitors as well, so you won't experience things like tearing or stuttering. They will come with at least one USB Type-A passthrough port, so you can plug your mouse directly into the monitor and reduce latency. Plugging the mouse into the display also lets you measure the time it takes for a resulting display pixel change and provides you with a full system latency measurement.

You can then view real-time latency metrics in a new Performance Overlay in GeForce Experience, including more detailed breakdowns of mouse, PC and display, and system latency.

NVIDIA is touting these new displays as the best suited for esports and competitive play. Not only do they feature 360Hz refresh rates, they also utilise next-generation IPS technology and Ultra Low Motion Blur (ULMB) tech for improved motion clarity.

The company also partnered with AU Optronics to develop this next-generation of IPS panel technology expressly for these 360Hz G-Sync displays. Dubbed IPS dual-driver, this new IPS panel tech supposedly maintains fast, consistent response times and colour levels across the entire panel, even at 360Hz refresh rates. When compared to other display types, IPS panels have generally been known for improved colour accuracy and better viewing angles, whereas TN panels have been favoured by esports monitors because of their fast response times. The trade-off was a huge drop in colour fidelity, but NVIDIA says that with the new dual-driver IPS panels, gamers can now have the best of both worlds.

In addition, the new monitors will feature a G-Sync Esports Mode preset, which utilises custom-tuned settings specifically designed for competitive play in games like Valorant, Counter-Strike: Global Offensive, and Rainbow Six Siege. G-Sync Esports Mode ensures the lowest latency by turning off the variable backlight, and also increases black levels with a dark boost technology. On top of that, it fine tunes gamma levels to offset areas of darker contrast, allowing you to pick out enemies in dark areas more easily.

Finally, they incorporate a 240Hz ULMB mode as well, which is twice as fast as previous ULMB modes. You get improved motion clarity, which can come in useful when scrolling in competitive MOBAs.

Join HWZ's Telegram channel here and catch all the latest tech news!
Our articles may contain affiliate links. If you buy through these links, we may earn a small commission.
Previous Story
MSI says its Stealth 15M is the thinnest gaming laptop ever
Next Story
Facebook rolls out forwarding limit on Messenger to fight fake news