Apple's MacBook Pro (2018) continues to bring surprises; Laptop Mag has performed some benchmarks on a 13-inch model and declared it "the fastest system in its class".

While it's not surprising to see new MacBook Pros topping the various benchmarks (e.g. Geekbench 4), it's the file copy test of the SSD which truly blows the competition out of the water. The speed was so fast that the reviewer "had to do a double take". 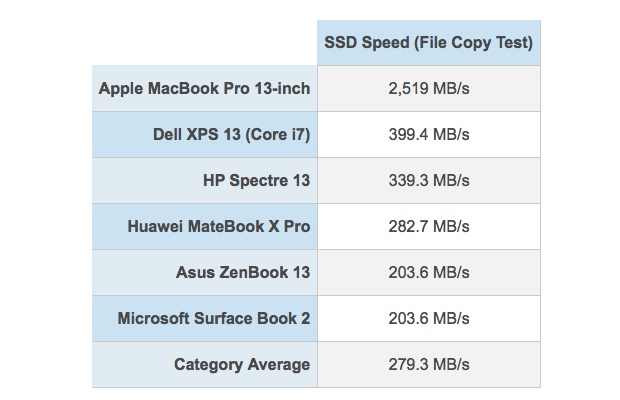 The reviewer observed that it only took the 13-inch MacBook Pro 2 seconds to duplicate 4.9GB of data, which is a rate of 2,519MB/s! He went on to run BlackMagic Disk Speed test for MacOS and the average write speed is 2,862MB/s! To put these numbers into perspective, the fastest Windows laptop is the Dell XPS 13 at 399.4MB/s and the average premium laptop has a speed of 279.3MB/s.

You may see even faster speeds on disk speed tests if you spend nearly S$11,000 on a fully decked out 15-inch MacBook Pro, but that's a lot to pay for having the fastest write speeds!