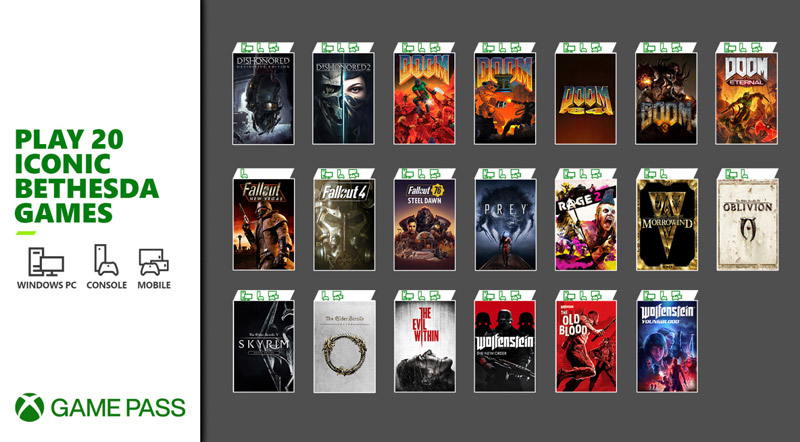 After Microsoft made their US$7.5 billion acquisition of Bethesda Softworks official yesterday, the two companies held a joint livestream talking about their future together. The livestream didn’t see any big game announcements, but we did get some interesting tidbits - such as Microsoft officially confirming that all future Bethesda games will only be playable on platforms with Xbox Game Pass!

This means that if you want to play future games in franchises like The Elder Scrolls and Fallout, you’ll need an Xbox console or a PC. However, Deathloop and Ghostwire Tokyo will likely still be playable on PlayStation 5 - as Sony had signed a previous exclusivity deal with Bethesda for both games.

We also got a full list of Bethesda games joining Xbox Game Pass. Starting today, 20 (!) games are joining the subscription service. These games come from iconic Bethesda franchises like The Elder Scrolls, Fallout, Wolfenstein, Doom and Dishonored. Here’s the full list - though it should be noted that some of these titles were already on Game Pass:

There are some notable omissions on this list, such as Doom (2016), Wolfenstein: The New Colossus and Fallout 3. Microsoft might be staggering out new additions to Game Pass, so these missing titles will probably join the service eventually. Microsoft also announced that, “a handful of these games,” will also get an FPS boost on Xbox Series X|S, increasing the framerate for certain backward-compatible Xbox One games. More details will follow, according to the company.

Join HWZ's Telegram channel here and catch all the latest tech news!
Our articles may contain affiliate links. If you buy through these links, we may earn a small commission.
Previous Story
Adobe Photoshop and DaVinci Resolve will now run natively on Apple Silicon
Next Story
5 Reasons why the ROG Flow X13 is the true work and play gaming notebook of 2021