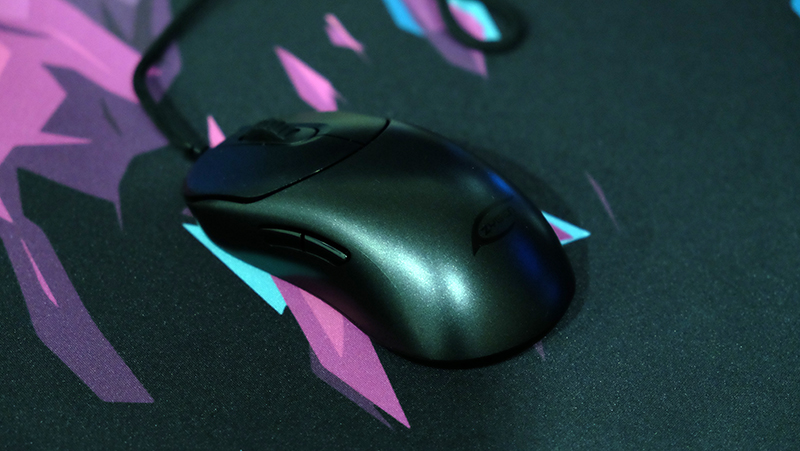 Zowie DNA is written all over this mouse

The ZYGEN NP-01 is a new esports mouse in town, and it's got the hallmarks of Zowie design written all over it. Designed by former Zowie engineers and ZYGEN, a brand owned by Japanese Counter-Strike player Junya "noppo" Taniguchi, the NP-01 is the first mouse from new entrant Vaxee. The Vaxee team compromises mainly of former Zowie engineers, and Zowie fans will recognise the same design elements that made Zowie mice so popular. The latter have gained quite the following among esports professionals over the years on the back of their comfortable shapes and no-nonsense focus on performance on the tournament stage.

The NP-01 shares that focus, while zooming in on the tiniest details that professional players care about. The goal was to create a mouse that would offer consistent performance and comfort, and I think they've succeeded.

Despite its no-frills, driverless approach, the NP-01 makes it quite easy to customise various settings on the mouse, from the DPI and polling rate to the click response time and lift-off distance. All this can be done without any software, making for a truly hassle-free experience when using the mouse on a different PC. The bottom of the mouse houses the DPI, polling rate, and click response time buttons. Here's an overview of the different options you'll have: 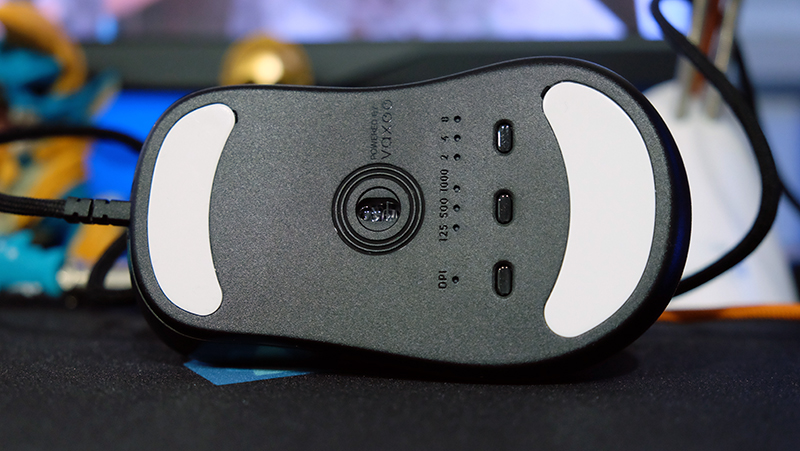 The sensor is a PixArt PMW3389 optical sensor, which can go up to 16,000DPI on some mice. However, Vaxee and ZYZEN have opted to limit this to just 3,200DPI on the NP-01. It's not difficult to see why – most gamers probably won't need anything above that, and offering too wide a DPI range would fly in the face of offering a simple selection of the most popular DPI steps.

The polling rate selection is clearly geared toward the preferences of professional players as well. While Razer is hard at work increasing the polling rate on its mice – it recently debuted a prototype with a whopping 8,000Hz polling rate – Vaxee is sticking to the basics with the option even for a low 125Hz polling rate. Some esports players still play at 500Hz, with the rare few even going for 125Hz, and the idea is that they'll be able to pick the setting that they're the most familiar with on the NP-01. 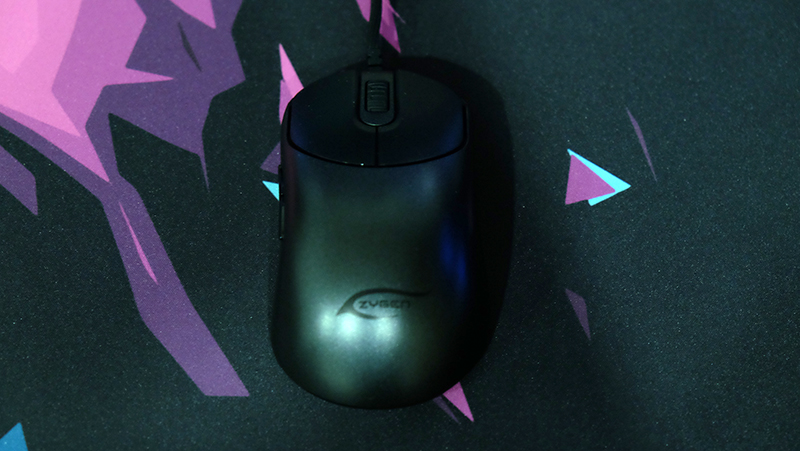 Similarly, the click response time selection goes against the marketing line favoured by many companies today. While it may seem puzzling why an 8ms response time is offered, especially when companies like Razer and Endgame Gear are touting their lower click latency as a major selling point, the Vaxee team is more focused on allowing players to experiment with different settings and pick what they feel the most comfortable with. I was told that the design team found that a 1ms click latency resulted in unwanted double-clicking in some instances, so the team opted for 2ms as the lowest option for better reliability.

Given that I'm someone who used to obsess over things like input lag, I ended up playing mostly at 1,000Hz and with a 2ms latency. I also played at 4ms and 8ms latency, but there wasn't that much of a noticeable difference in gameplay. I then used the Human Benchmark test to make a rudimentary attempt to see if there was a measurable difference between the 2ms and 8ms settings – with an average of 162ms and 163ms respectively, I don't think that there's much need to lose sleep over which setting to pick. 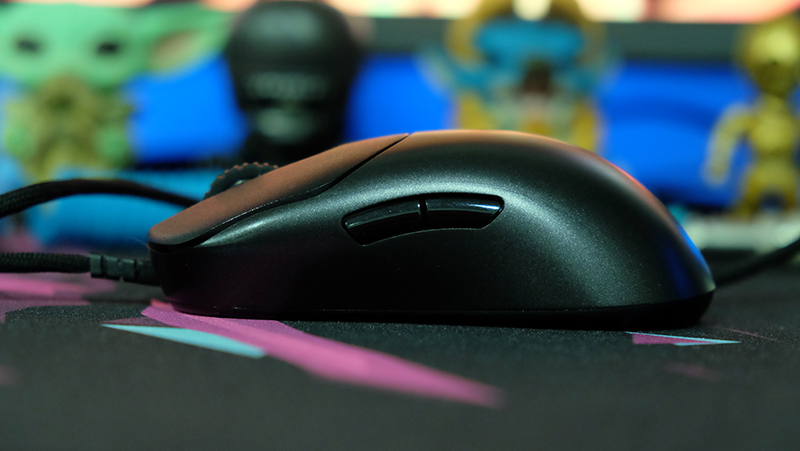 As expected, the PMW3389 delivers flawless performance. However, I did encounter some issues while playing, where my crosshair appeared to move sluggishly whenever I lifted the mouse. Vaxee has a helpful article on this, and switching the lift-off distance to Medium fixed it for me (it's set to Low by default). I'm using a ZeroGravity cloth pad from Odin Gaming, so your mileage may vary. Another reason why Vaxee allows you to choose between Low, Medium and High for the lift-off distance is because it also offers a different set of thicker 0.6mm feet, which may require some tweaking of the LOD to achieve the feel that you're used to.

Adjusting the LOD is simple enough – you just unplug the mouse, hold down Mouse 1 and 4 (or whatever combination corresponds to the setting you want), and plug it back in.

The stock 0.45mm PTFE feet that come with the mouse are large and smooth. The mouse glides smoothly across my mouse pad with no noticeable scratchiness, and I'm pretty happy with their performance right out of the box. 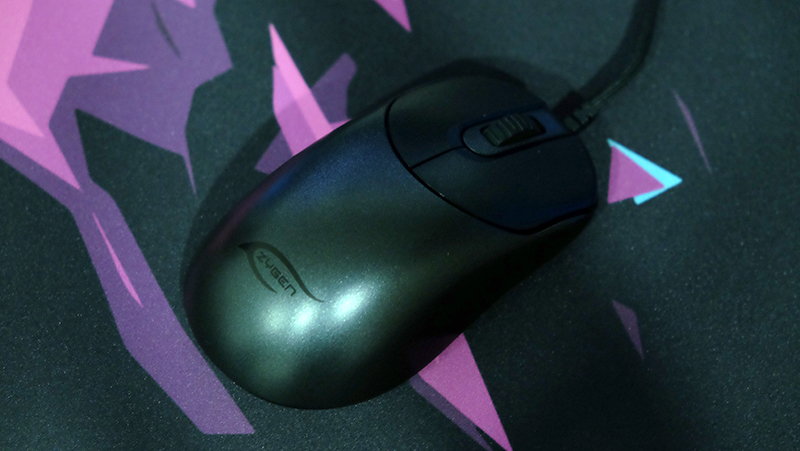 Then there's the shape of the mouse itself. The NP-01 is something of a cross between the Zowie S2 and its ergonomic EC series. The slight bulge on its right side allows you to rest your ring finger and pinky more comfortably, instead of having them cramped up on the side of the mouse. The left edge also has quite a prominent concavity for your thumb, making the mouse super comfortable to hold, especially if you're a palm gripper.

At 120mm long, this is a medium-sized mouse, and you'll need medium to large hands if you want to use the fingertip or claw grip on it. Folks with smaller hands are mostly restricted to the palm grip on this mouse, so it's a really good thing that it is so comfortable.

Build quality on the mouse is excellent. Vaxee is bucking the trend of super light, honeycomb shell mice, and it says it's doing that so it won't compromise on structural integrity. True to its word, there is no flexing, creaking, or rattling anywhere, but it does mean that the mouse is relatively heavy by today's standards at 75g. It's still really useable and the weight didn't bother me too much, but I'd still have preferred a lighter mouse. However, Vaxee says reducing the weight further would have interfered with its desired click feeling and durability when gripping the mouse. 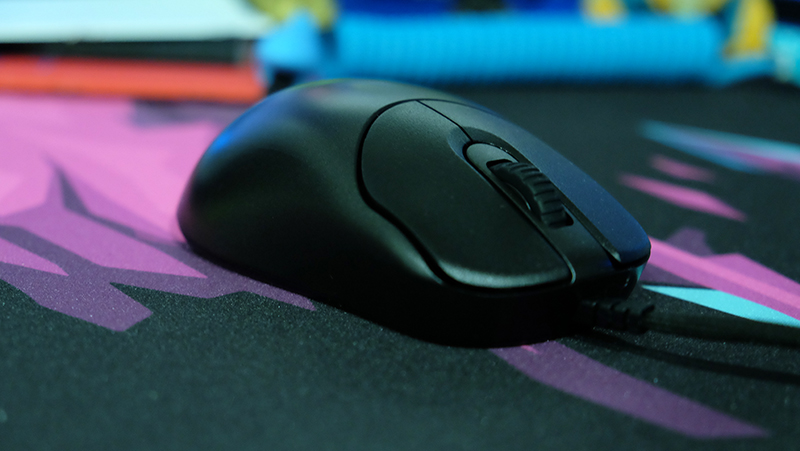 That said, I do enjoy the matte finish on the plastic shell, and it doesn't seem to pick up much dirt and grime either. It's a gorgeous, smooth coating, and the top of the mouse curves smoothly down to the sides so you virtually don't feel any breaks between the two pieces of plastic. It's a small detail, but it's one of the many design decisions that go toward creating an impression of quality. The dividing line remains faintly visible, but it feels completely smooth when running your finger over it. The mouse buttons also sport a different finish from the rest of the body – it has a bit more texture, and I quite enjoy the extra grip it provides.

In true Zowie fashion, the switches are stiffer Huanos instead of the more common Omrons. These are different from the ones used on Zowie mice however, and Vaxee has opted for slightly lighter 60g switches instead of the usual 70g. Vaxee says these switches were specially made for the company, and it is the only one on the market using them right now. Suffice to say, clicks feel responsive and crisp, and there is pretty satisfying feedback to each click. The side buttons are crisp and springy as well, and they never feel mushy. 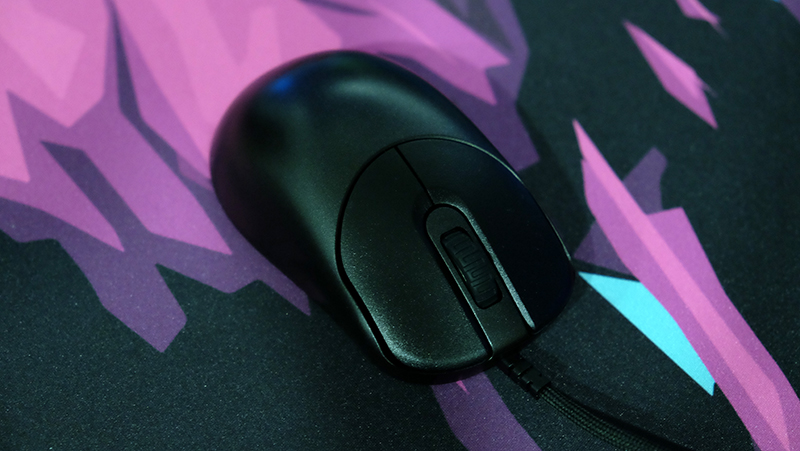 The primary buttons are separate from the mouse shell, a first for the former Zowie team. Vaxee's attention to detail shines through here as well, and they've made a commendable effort to reduce side-to-side wobble and eliminate post-travel. When pressing down hard on the switch, the button never touches the bottom of the mouse, so you get the same consistent click feel no matter how hard you're pressing down.

The scroll wheel is now a 24-step optical wheel, but as on previous Zowie mice, it's my least favourite part of the mouse. It's noisy, with each step producing a very audible click. It's gloriously tactile though, so you might appreciate it if you require maximum precision on the scroll wheel, such as when you use it to scroll through weapons in game. Unfortunately, the scroll wheel can also feel a little shallow when clicking, and it could use slightly more travel. 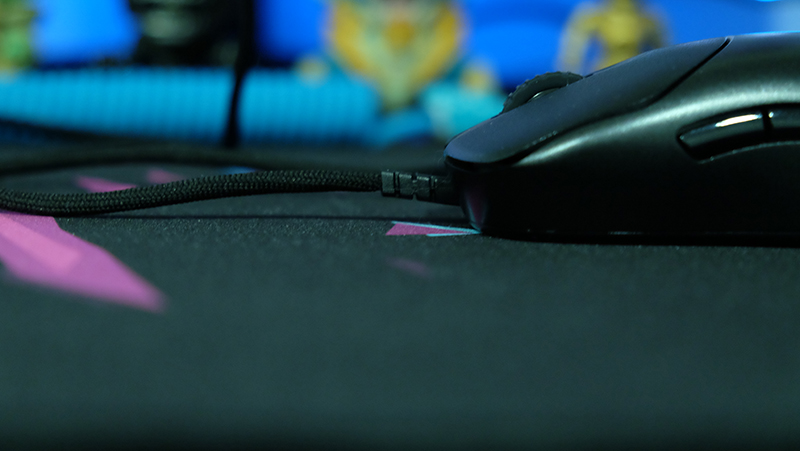 Finally, the cable is a flexible, paracord-style cord, similar to most modern gaming mice that have come out in recent months. Taking yet another design cue from the Zowie S series, the NP-01's cable also exits the mouse at an elevated angle to avoid cable drag. One key difference is that this is achieved by raising the cable itself, as opposed to the mold. The S series' design supposedly causes the centre of gravity to shift closer to the front, but Vaxee has avoided that with the NP-01. Another pretty nifty thing to note is the nature of the strain relief portion of the cable itself. It's designed to be adjustable, so you can bend and mold it to an even more aggressive angle if you wish. 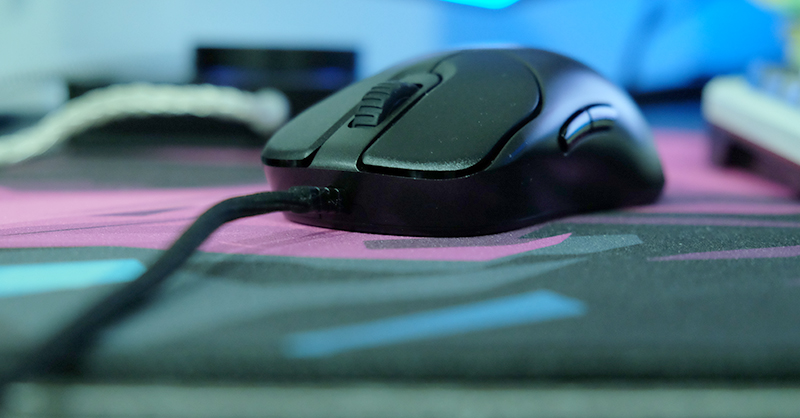 The ZYGEN NP-01 is an excellent first mouse for Vaxee. Its Zowie pedigree is abundantly clear, and I expect that it'll generate significant interest among the esports crowd, especially among those who have used and liked Zowie mice in the past. I appreciate the team's attention to detail when it comes to the NP-01, down to maintaining the consistency of each click regardless of how hard you push down.

This is a no-nonsense, driverless mouse, so those hoping for something a bit fancier may be disappointed to find that there is still no RGB lighting to be found anywhere. You could even argue that the mouse looks a little dated, but given its focus on pure functionality and how well it works, I don't feel inclined to complain.

The NP-01 is available for pre-order now at S$89 from Vaxee's website. It's reasonably priced, and I have no qualms about recommending it to those who enjoy ergonomic mice.