The Zotac ZBOX Sphere OI520 is one funky Mini-PC

As we have mentioned in our last review of the Zotac ZBOX IQ01, Mini-PCs have been experiencing significant growth in the past year. Specifically, vice president of Intel’s PC Client Group Lisa Graff said that sales of Mini-PCs have shot from nearly zero units in 2012 to over a million in 2013.

And if we are talking about Mini-PCs, one name that has come to the fore is Zotac. Recently, the company further stamped its Mini-PCs credentials by announcing the pocket-size ZBOX PI320 pico desktop PC, which measures 11.5cm long. 6.6cm wide and is 1.9cm thick - or roughly the equivalent of three iPhones stacked on top of each other. 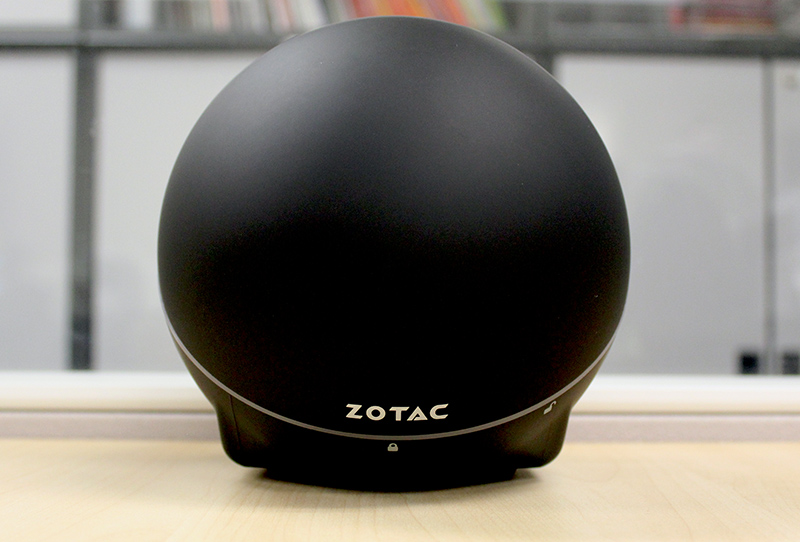 While these systems may be small, they are certainly not lacking in processing capabilities and thanks to Intel’s latest Core processors, they are more than capable of running productivity tasks, web browsing and watching high-definition videos. As a result, they are often employed by enthusiasts in living rooms as HTPC (Home Theater PCs). On top of that, the compact nature of Mini-PCs also mean that they lend themselves well to unusual designs, so as to better complement the living room environment. And one of the funkiest Mini-PCs we have seen thus far is the new Zotac ZBOX Sphere OI520.

Most desktop systems and Mini-PCs are predictably squarish or blockish, but not the Zotac ZBOX Sphere OI520. The name alone should give you a hint as to how it looks like and it stays true to its name. Decked in black, the ZBOX Sphere OI520 sports an unusual spherical design. It is not entirely spherical, however, and it is only upon closer inspection that one realizes that it has a square base that has been integrated into its spherical design. The square base helps keep it upright and it is quite subtle and not immediately apparent, unless you look at the ZBOX Sphere OI520 from its side. 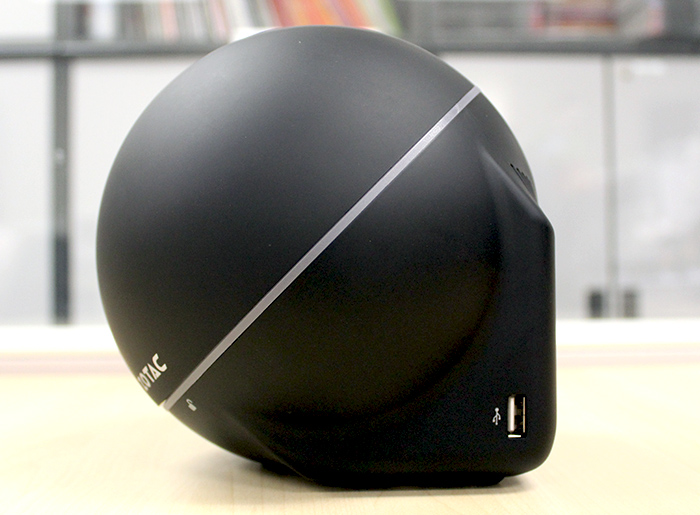 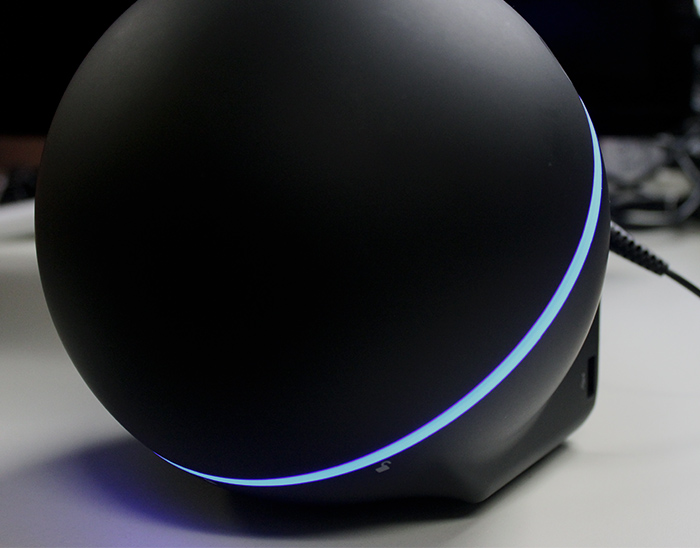 The chassis is made of thick plastic and has been given a rubberized matte finish. This serves two purposes: for one, it helps reduce fingerprints, but more importantly, it provides additional grip for the times that you want o access the ZBOX Sphere OI520 innards. This is because to open it up, one would need to grip the upper half of the case and twist it open, not unlike opening a jar of peanut butter. However, it must be noted that this task would be accomplished easier if one has big hands, because the circumference of the lid is pretty big. 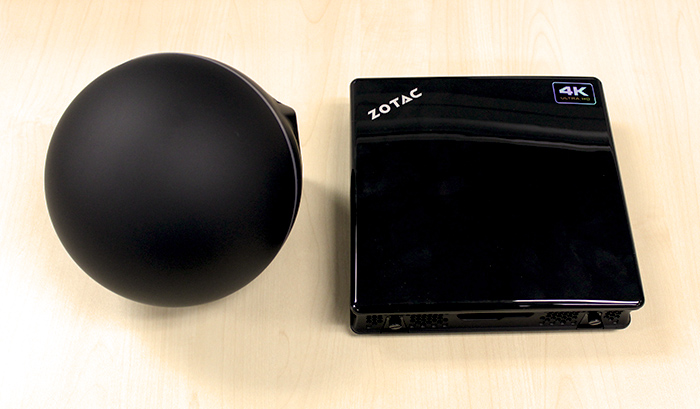 Users would need to supply their own memory and the ZBOX Sphere OI520 has two memory bays to support regular DDR3 SO-DIMM memory modules with support for speeds of up to 1600MHz and a maximum capacity of 16GB. Storage is another component that users would need to supply on their own and the ZBOX Sphere OI520 supports both regular 2.5-inch SATA 6Gbps drives and mSATA drives. This lets users install a mSATA SSD and a regular hard disk drive for the best combination of speed and capacity.

The best bit about the ZBOX Sphere OI520 is that despite its modest size, there is no shortage of ports and connectivity options. In total, it has seven USB ports (4 x USB 3.0, 3 x USB 2.0), an HDMI port, a DisplayPort, Ethernet port, a 4-in-1 memory card reader and headphones and microphone jacks. Very impressive for a device of its size.

Installation of the memory and storage components is straightforward and very easy, requiring users to only use a single screw to secure each drive in place after it has been installed, though it must be said that installing the mSATA drive, which is located on the underside is a little trickier because of the angle of entry. However, the most frustrating part of all, for us at least, is actually twisting off the cover. The cover locks into place but the locking mechanism is unreliable and can be frustrating to unlock. Apart from that, installation was an absolute cinch. 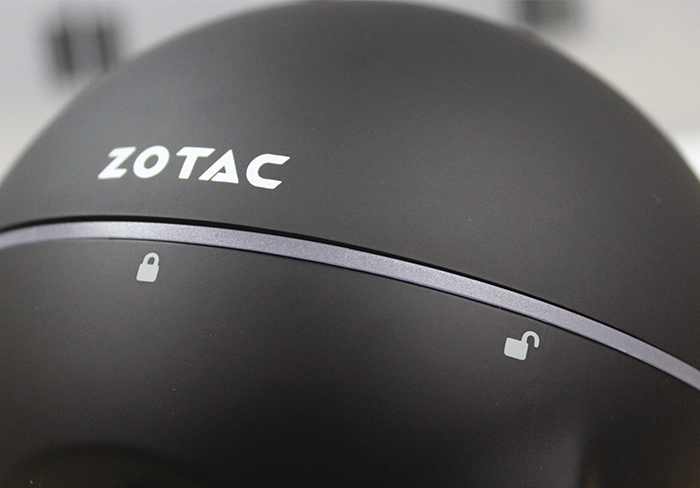 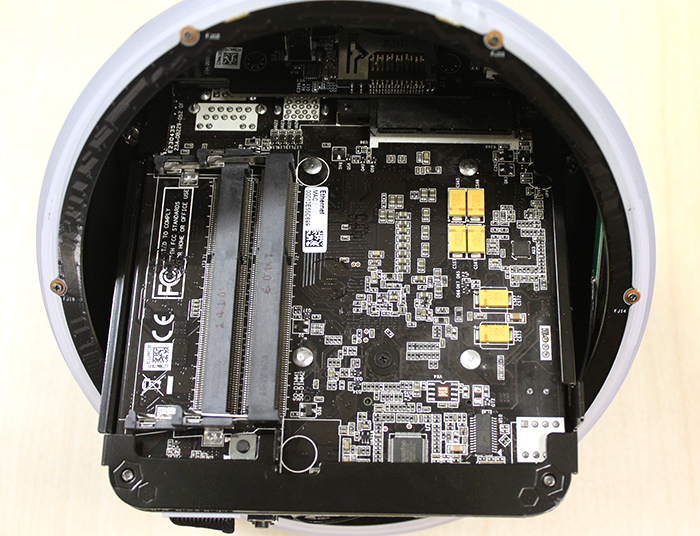