Zergotech Freedom review: The keyboard that tries to solve all your ergonomic woes

Zergotech Freedom review: The keyboard that tries to solve all your ergonomic woes 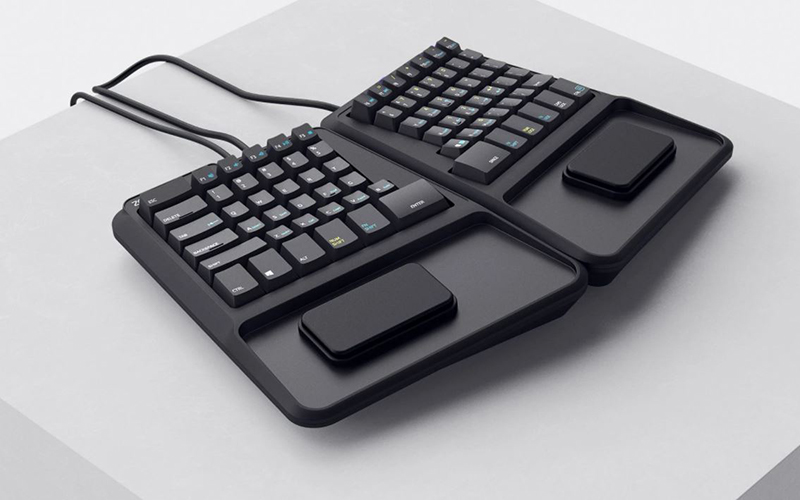 Some split ergonomic keyboards can be quite a nightmare to get used to. Not so the Zergotech Freedom, which attempts to combine ergonomic innovations with a familiar design. The Australian company has worked hard to address the major pain points that can lead to repetitive stress injuries, such as by eliminating the twisting of hands and ensuring symmetry of reach when typing. It does this through a combination of tiny design tweaks, and the end result is a very unique typing experience that someone who cares a lot about posture and typing ergonomics may want to look into. 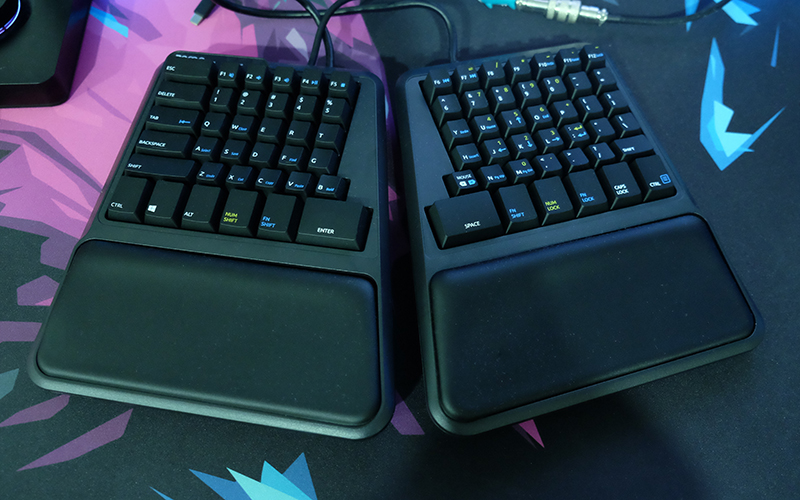 I'll have to admit that I've never before tried to use a split keyboard, and as expected, the Zergotech Freedom took some time for me to get used to. Fortunately, the learning curve wasn't as steep as I expected, and the keyboard thankfully preserves the standard QWERTY layout, albeit in a semi-orthogonal fashion. The QWER row has been pushed slightly to the right to achieve a more symmetrical reach, but the bottom two rows retain their usual positions. However, the shift to the right of the QWERTY row was one of the things I found the hardest to get used to, and I found that I would keep hitting, say "I", when I really meant to hit "O" because I was accustomed to a more leftward position of the QWER row. 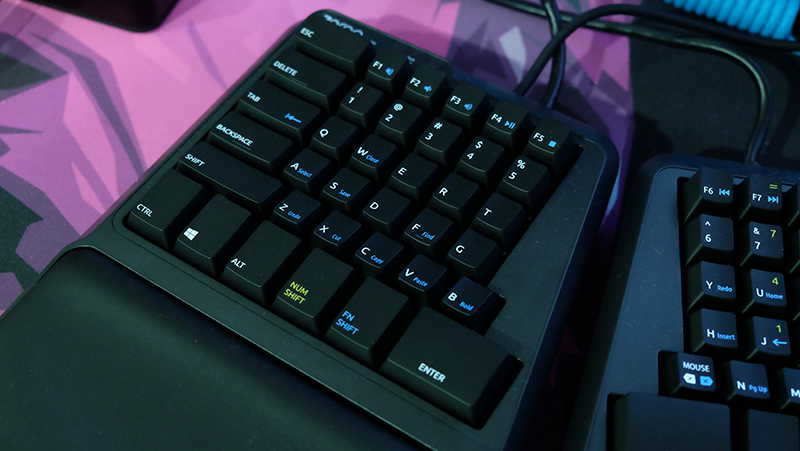 The other big change is the remapping of the Enter, Delete, and Backspace keys to the left half of the keyboard. Backspace now sits where you'd expect the Caps Lock key to be, and that has in turn been relegated to the right half. This new layout reduces the amount of distance your fingers have to travel to hit these commonly used keys – it's now entirely possible to access the aforementioned three keys without taking your hand off their default positions. For instance, Backspace can be quickly pressed with your left pinky, while your thumb rests on Enter. Similarly, the Spacebar now sits under your right thumb.

To further reduce the need for any horizontal travel, the arrow keys and number pad are integrated as a secondary layer on the keyboard. The Fn key sits next to the Spacebar and is also easily accessible by your right thumb, and you can hold it down and use both arrow keys and the numpad without your hands leaving their resting position, which is pretty neat. 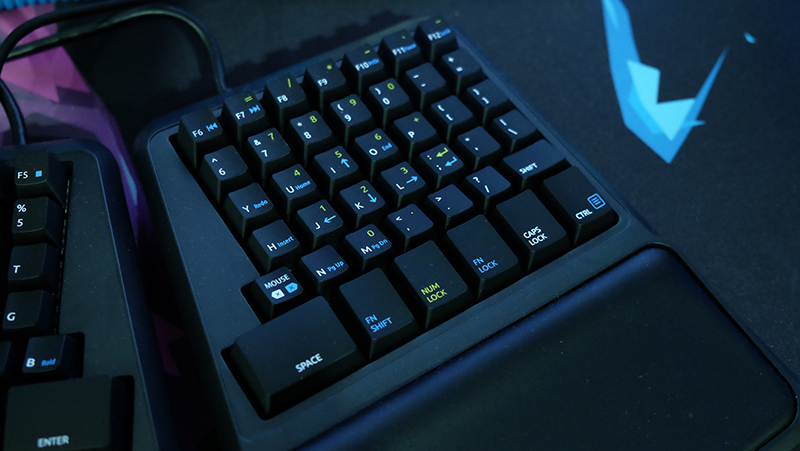 I had to unlearn years of muscle memory to get used to it, and I remained hobbled by typos and a far slower typing speed a few hours in. The Spacebar proved a little pesky as well, as I'm used to pressing it with my left thumb. This is easily rectified though, owing to the programmable nature of the keyboard. The onboard KEYKORTEX programming module lets you swap the Spacebar and Enter keys using the Swap Macro function, among other things, so the Freedom could potentially be used for gaming as well.

However, it was easy to see the benefits of this layout as reaching for Backspace or Enter was virtually eliminated, and I can see how this might be useful for someone dealing with wrist pain or other issues. After just a short time, I was able to see how the amount of twisting and travel I had to do was significantly reduced, even if I had to look at the keyboard as I learned the new layout.

Another unique feature is the support for multiple typing positions and angles, via the use of four feet on each half of the keyboard. This solves an issue known as pronation, where your forearm needs to rotate and lay flat to operate a traditional keyboard. The Freedom is never completely flat, and it has a slight 5° tented angle away from the centre. If you want even greater relief from pronation, you can opt for a more aggressive 12° angle. Alternatively, you can opt for a declined or inclined position to cater to different desk heights. 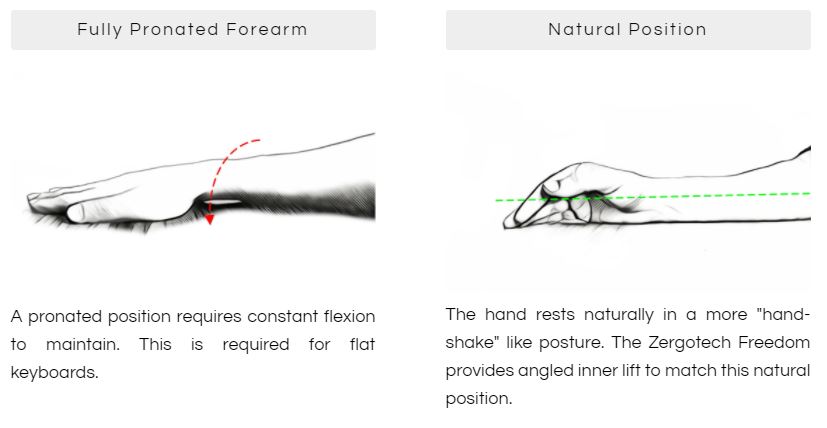 This may seem a little odd at first, but it's motivated by science and ergonomics. The natural position of your forearm and wrist is closer to what you would adopt for a hand shake, which means that the flat position we adopt when typing on traditional keyboards isn't the best. The steeper typing angle that slopes off to the sides aligns your forearm more closely with its natural position, and Zergotech says this can help with pain relief. The Freedom is far from the only peripheral to do this, however, and Logitech's MX Vertical Advanced Ergonomic Mouse also attempts to keep your forearm in a more natural position with a very aggressive slope.

Ultimately, the Freedom wants to minimise the contortions our fingers and wrists get up to when typing. Another way it does this is through the use of sliding palm rests, so you can easily slide your hand up and down to roam and access distant keys more easily. Zergotech has also provided the option of fixed, full-sized palm rests, and while you do lose some mobility with them, they were what I preferred. Either way, the integrated palm rests feel plush and comfortable, raising your wrists relative to the keys and relieving strain. A wrist rest is a key part of typing comfort, and I can't go without one, even on a regular keyboard. 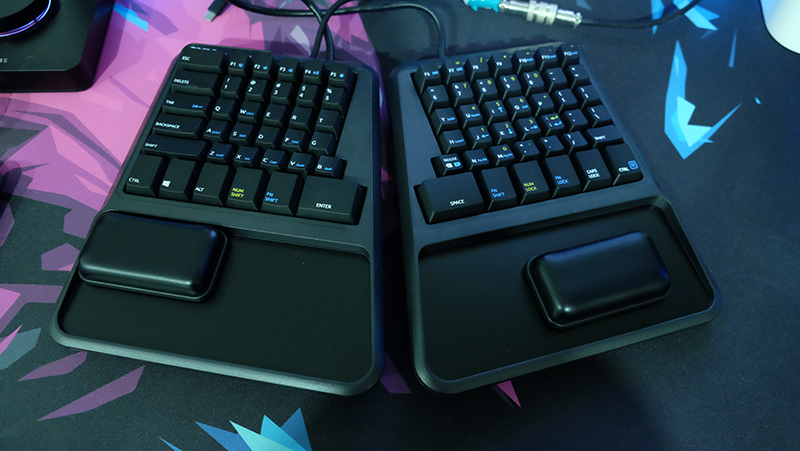 The split layout and slight inward tilt of the keys also provide greater ergonomic freedom in positioning the keyboard. The inward tilt positions your arms at a more natural angle, while the ability to place both halves further apart means you can sit with your shoulders back, open, and in a more relaxed posture.

The Freedom utilises tactile Kailh Box Brown switches, with an actuation force of 45g and travel distance of 3.6mm. Box White switches are available as well, in case you prefer clicky switches, but I'd have liked to see an option for linear switches too. Compared to regular Cherry MX switches, Kailh switches feature a box enclosure around the cross-shaped MX-style stem. This box, in turn, protects the switches from dust and moisture, and they even have an IP56 resistance rating.

Overall, the Zergotech Freedom is a really solid keyboard with truly innovative design elements. At US$339 (~S$456) though, it is a pretty steep ask and fairly intimidating for newcomers to ergonomic, split keyboards. While I could see myself adapting to it after just a couple of hours, I ultimately preferred the compact layout of a 60% keyboard. Fun fact – after just a couple of hours with the Freedom, I found myself making typos on my regular 60% board when I attempted to return to it.

That said, I've also never experienced wrist pain or any injuries from repetitive stress, so I'm probably not the target audience for the Freedom. If you're looking for pain relief from a more ergonomic keyboard though, the Freedom should be right up your alley. Even if you're coming from a regular keyboard, Zergotech's efforts to keep the layout as familiar as possible go a long way, and it's only moved around keys where necessary. You're paying for smart engineering and stellar build quality, and if you're really experiencing issues with your arms or wrists, this could end up being a godsend.