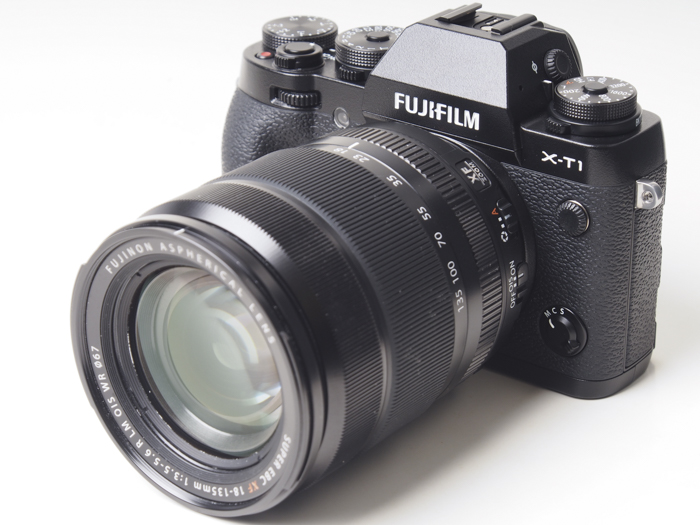 With its twin dials and decidedly retro looks, the X-T1 continues Fujifilm’s fine run of retro-inspired cameras, and offers users a professional-quality body with the size and weight savings of a mirrorless option. Fujifilm says the X series represents the pinnacle of photographic technology married with the appeal of traditional styling, and it certainly seems to be living up to this claims with the X-T1.

We first had a look at the X-T1 back in February, at which time Fujifilm had yet to release a weather-sealed lens to go with the camera, so it was hard to say what shooting with a fully weatherproof mirrorless camera would be like. With the recent introduction of the Fujinon XF 18-135mm f/3.5-5.6 OIS weather-resistant zoom lens in June though, we now had a full weatherproof system to put to the test.

Measuring 129 x 90 x 47mm and weighing in at just 440g (body only, with batteries) the Fujifilm X-T1 is easily lighter than pretty much every other “professional” series camera out there, though your choice of lenses will ultimately determine the total weight. For example, the Fujinon XF 18-135mm f/3.5-5.6 WR OIS lens we had for this review weighs just 490g, so the combination gave us the equivalent of a 27 to 206mm reach with optical stabilization for just under a kilogram!

Thanks to its full magnesium-alloy construction, the camera feels incredibly solid in our hands; and while it may be the one of the largest mirrorless cameras in the market now, it’s still quite a bit smaller than other pro level DSLRs. We really think pros will take to this camera, not only because it's easy to pack, but their overall load will decrease at the same time when you factor in lighter tripods and lenses. This applies to nature or extreme sports photographers too, who often need to stay nimble with their gear. 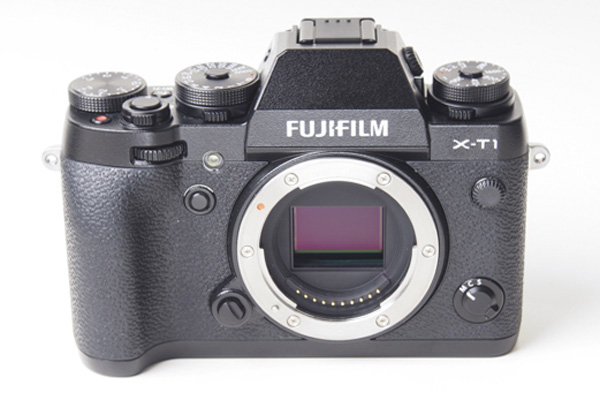 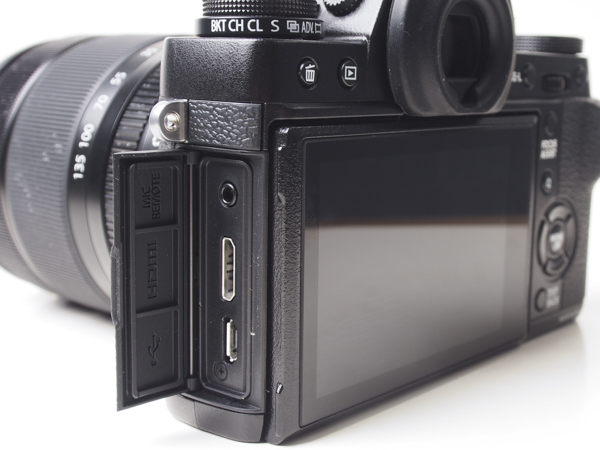 Fujifilm says that no less than 75 seals keep the X-T1 dust and water-resistant, and freeze-proof up to -10oC. Handling-wise, we think the four-way directional pad needs to be either raised more, or made larger. There simply isn’t enough button area for a good tactile feel if you’re wearing gloves, and it’s also a limiting factor for selecting your autofocus point if you’re using single autofocus mode.

We must say we have a bit of a love/hate relationship with the interface of the X-T1. While the control dials place most settings at your fingertips, you need to depress the center locking button to adjust them. This prevents accidental changes, but also takes a bit of getting used to, which means you’re likely to be bringing the camera down from your eye every time you want to make changes. 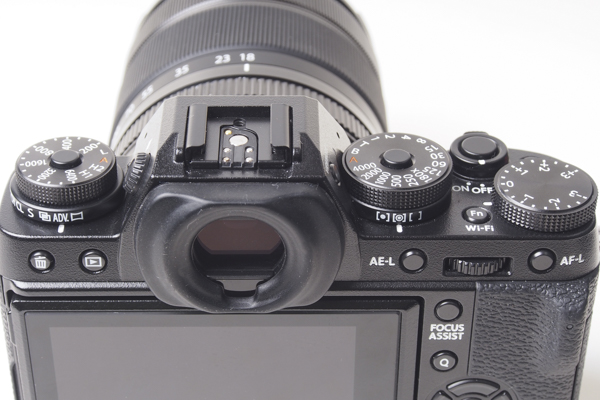 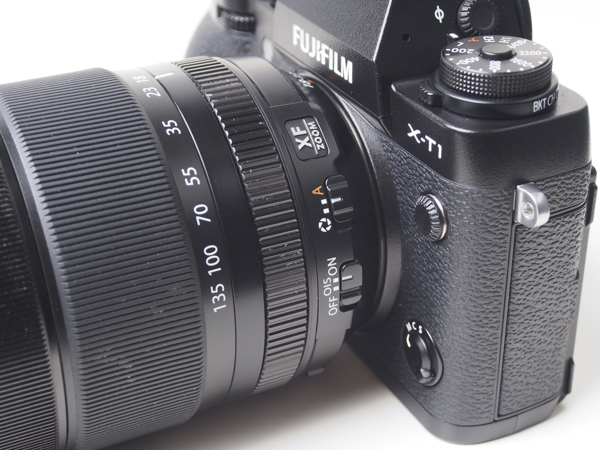 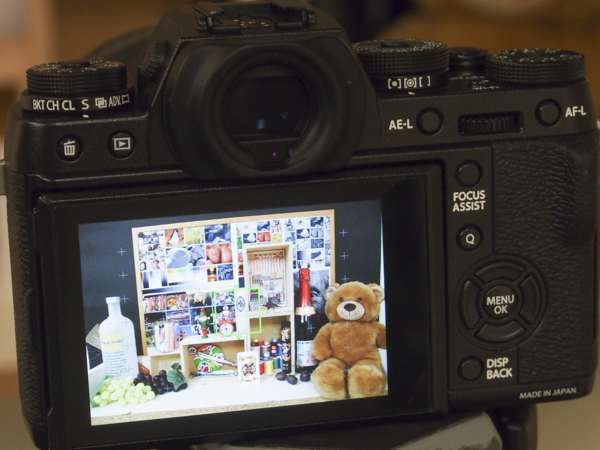 Also, when it comes to focusing, you have to first press a button to activate AF area selection mode; each directional-pad also acts as a custom button, so trying to move the AF point (as you would on other cameras) brings up the associated menu instead. This is something Fujifilm has already noted though, and a firmware patch is coming in December to solve the issue, so kudos to them for taking early feedback into consideration.

Another thing we love about the X-T1 is the OLED electronic viewfinder (EVF). Bright, clear, virtually lag free (Fujifim says 0.005 second), and with a magnification ratio of 0.77x, this 2.36 million-dot EVF is probably the best EVF we’ve looked through to this point. Fujifilm has also smartly added the option to automatically re-orientate the shooting info when you rotate the camera, and their dual screen manual focus certainly makes manual focusing a lot easier compared to some of the other implementations we’ve seen. Plus, the screen swivels up and down so you don't have to crane your neck or lie down on the floor just to compose your shot when you need that awkward angle. 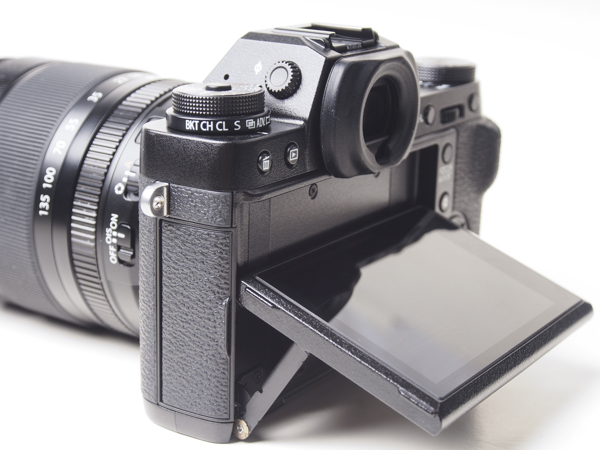 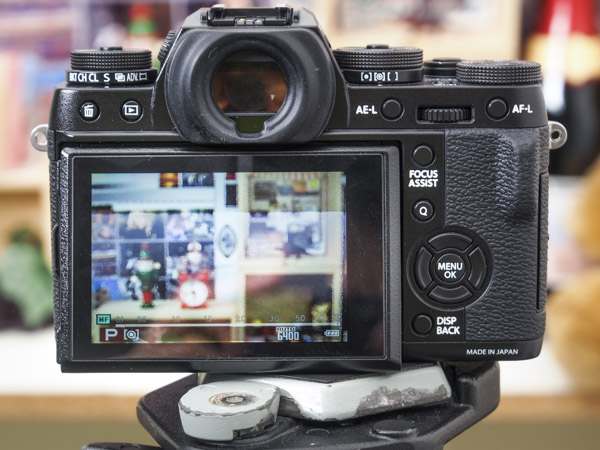 When focusing manually, the X-T1 automatically zooms in to the center of what you’re trying to focus on in the viewfinder, making it easy to see if you’re actually in focus. Also, when shooting in “Full” mode, the X-T1 stretches the display across your entire field of view, placing the shooting info on the top and bottom of the screen. 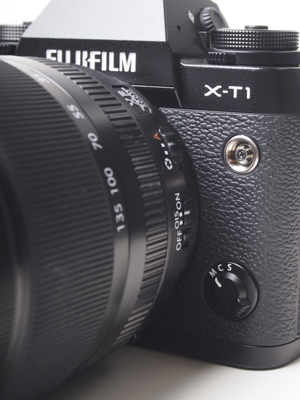 We must also note how we like that the X-T1 comes with both a traditional hotshoe and a flash sync port for use with traditional flash units. It doesn’t have a pop-up flash, but it ships with a hotshoe mount flash (the EF-X8) that raises up higher than most pop-up flashes we’ve seen, which helps eliminate red-eye. While we like that it folds down flat, we do wonder how many people will lose the EF-X8 in their pockets or camera bags. 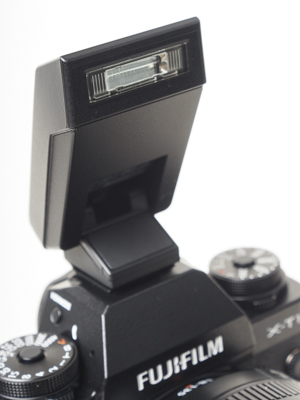